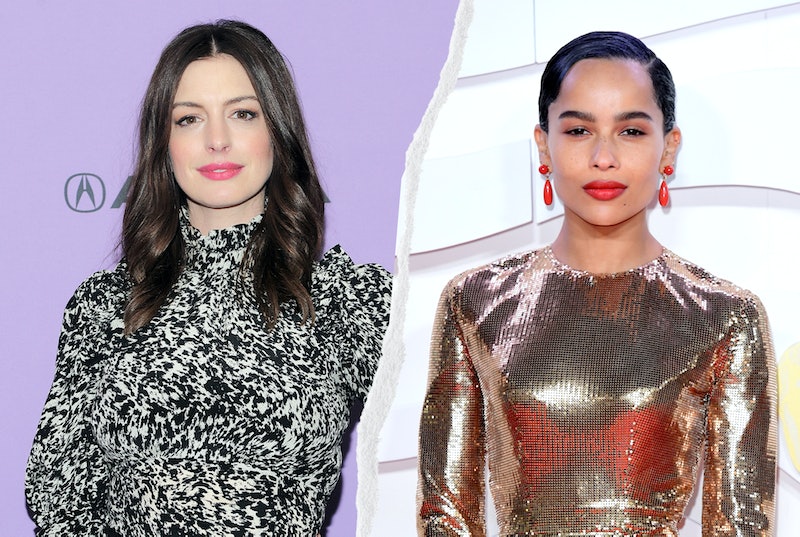 Anne Hathaway stole the screen as Catwoman in 2012's The Dark Knight Rises, and now people are curious if she has any advice for Zoë Kravitz. The High Fidelity star is set to take on the iconic role of Selina Kyle in Matt Reeves' The Batman alongside Robert Pattinson. She will also be joining a long list of talented actors that have portrayed the iconic superhero before her, including Hathaway, Michelle Pfeiffer, and Halle Berry.

When it comes to advice, though, Hathaway didn't have too much to offer. "The only way to play the role is to give your version of it," the actor told Collider. She also revealed that she probably shouldn't be the authority on how Kravitz approaches the role. "You saw the picture of her coming down those stairs, right?" Hathaway said, referring to early production photos. "Yeah, she doesn't need my advice."

In October, fans got the first glimpse at Kravitz as Selina Kyle after the star was photographed on The Batman set in the U.K., as per Elle. The photos showed the actor descending courthouse steps in an all-leather ensemble with a long trenchcoat, knee-high boots, and headpiece. Kravitz was also snapped linking arms with John Turturro, who will play villain Carmine Falcone in the film.

While it's clear that Kravitz nailed the Catwoman look, Hathaway also seemed confident that the actor would bring a unique perspective and energy to the character. The Witches star said her only advice for her successor would be "literally don't listen to anybody." She added that every past Catwoman star worked with different directors, and therefore, "all of our interpretations were specific to the films that they were in."

Additionally, Hathaway issued a reminder that many actors have reinvented superheroes and supervillains over the years, noting that "all the Jokers were specific to each director they have." And since everyone's version of these characters is different, fans shouldn't "get too bogged down with the comparison." Meanwhile, the Oscar-winning actor emphasized Kravitz's talent, saying that she is so excited to see what Kravitz does with the role. "I thought she was a perfect choice," she added.

Kravitz is more than prepared for her turn as Selina Kyle. In 2017, the Big Little Lies star voiced an animated Catwoman in The Lego Batman Movie. In March, she revealed her intense preparation for the role, saying that she'd spent two months in London before filming "just getting in shape, training, learning fights," per Men's Health.

The Batman's filming schedule and release date has changed several times due to the COVID-19 pandemic, according to Elle. The film was originally scheduled for release in June of 2021, but was postponed until October of that same year. Unfortunately, it's been pushed back again due to pandemic restrictions and is now slated to hit U.S. theaters on March 4, 2022.

More like this
Amanda Seyfried Says She Felt Pressured To Shoot Nude Scenes At 19 Years Old
By Jake Viswanath
Everything To Know About 'RHONJ' Season 13
By Brad Witter and Jake Viswanath
Who Is Camila Cabello Dating? She's Getting Cozy With Lox Club CEO Austin Kevitch
By Radhika Menon
'Euphoria' Star Jacob Elordi Reveals Why He Almost Quit Acting
By Radhika Menon
Get Even More From Bustle — Sign Up For The Newsletter