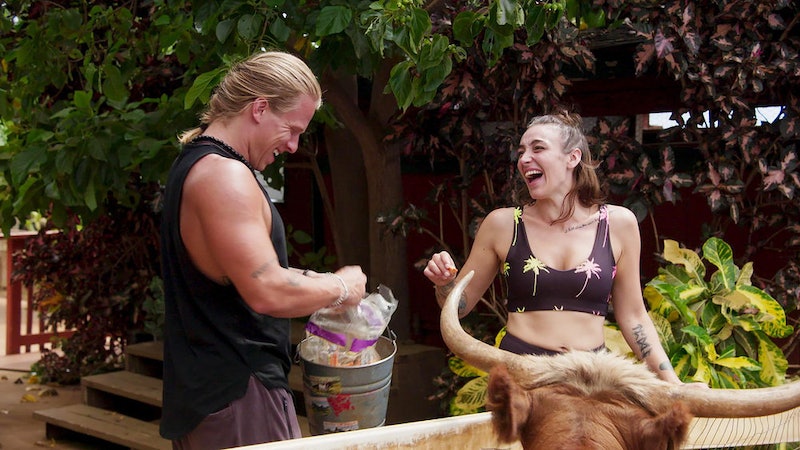 One of television’s messiest shows, Temptation Island, has wrapped up its fourth season finale. Things unfolded just about how you’d expect for a reality show where you’re essentially coaxed into cheating on your partner. While the couples who test their relationships on the island do so of their own accord, it often proves difficult for one, if not both halves of each pair, to remain faithful when met with an onslaught of sexy singles. And that’s exactly what happened when Ashe Lamiroult met Taylor Patrick.

Ashe originally arrived on the island with their partner, Hania Stocker. The two were attempting to get some answers as to just how strong their 18-month-long relationship actually was, and if it could survive potentially shifting into long distance. During a private confessional period, Ashe revealed that Hania had floated the idea of an open relationship, and while Ashe didn’t shoot down the idea, they expressed some uncertainties with nonmonogamy.

Their relationship began to develop more cracks when they met the season’s crop of singles. Ashe was taken aback by how openly Hania was flirting with some of the women, not to mention the fact that he had a pattern of introducing Ashe as his “friend,” as opposed to his partner. In Ashe’s absence, Hania revealed that he was enjoying all the attention he was getting. With their relationship being tested so early on, the outlook looked fairly bleak for Ashe and Hania post-Temptation Island.

Upset and dejected, Ashe found themselves in a period of contemplation, and during it, they grew closer to one of the island’s tempting singles, Taylor. Ashe’s interest in Taylor continued to grow, as had their frustration with Hania. Before long, the new duo had a clear connection and soon shared a heated kiss. In another confessional, Ashe revealed that they were still in love with Hania and wanted to be respectful of their long-term relationship. Granted, they also went on to explain just how physically attracted they were to Taylor, as well as their desire to keep getting to know him. The new couple did just that, spending the night together (initially with a pillow barrier), as Ashe searched for clarity with regard to their future with Hania.

Ashe’s Instagram provided some clues, the first of which was attributed to her follower count. Her profile showed that the 28-year-old neither follows nor is followed by Taylor. With neither party appearing on the other’s following list, it seemed that their steamy island experience was short lived. Perhaps notably, Ashe continues to follow Hania, and he also continues to follow them. However, it could’ve just be a clever ploy by Ashe and Taylor to not tip off a future or present romance while the dramatics of the show were still unfolding on a weekly basis.

Ahead of the Season 4 finale, Ashe spoke to Distractify about their relationship status in the wake of the show. Before touching on their relationship with Taylor, they took some time to mention where they stand with Hania: “I am always going to be honest with Hania forever,” they said, adding, “I’m still saying the stuff that I said on the show to his face when needed.” They also referred to Hania’s behavior on the show as “theatrics,” perhaps meant to garner sympathy.

When it finally came to the finale, Hania proposed to Ashe at the finale bonfire; however, they turned him down, opting to leave the island alone. At the reunion, Ashe revealed that they and Taylor didn’t continue speaking, mostly due to fact Taylor gave them a fake phone number. Taylor tried to downplay the situation, saying that their time together on the show was just simple fun and that they were never going to “take the next step and run away together.” Ashe ultimately admitted that she didn’t regret their time with Taylor, but did call him a “d*ck” and an “*sshole.” At least they’ll always have the memories?

This article was originally published on April 27, 2022