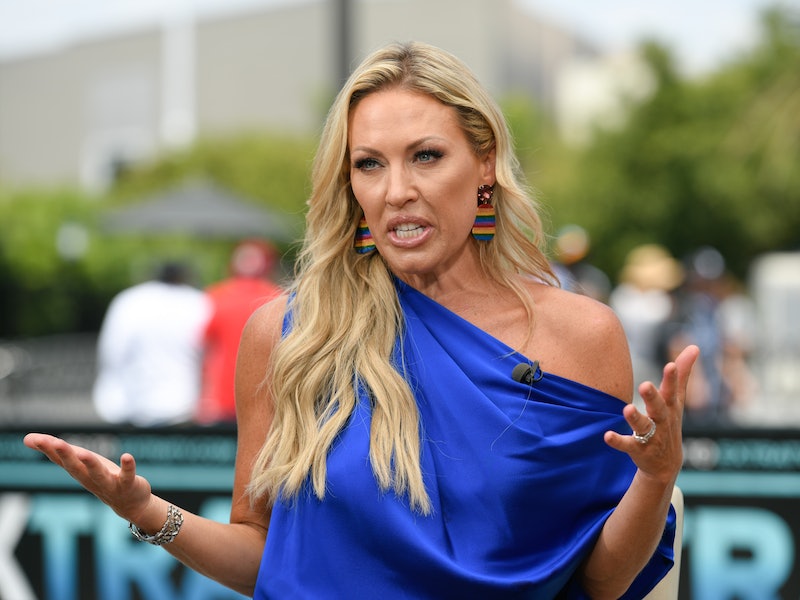 Despite sparking divorce rumors in recent months, RHOC star Braunwyn and her husband Sean are still together — sort of. In the second episode of RHOC Season 15, Braunwyn admitted that she and Sean were just "going through the motions" of marriage and hadn't had sex, or even held hands, since she got sober. Since then, the mom of seven has explained in interviews that she and Sean are living in separate homes while they "redefine" their 20-year marriage.

Right now, that seems to include seeing other people. "There's someone in my life right now that makes me happy and I smile just thinking about, but I kinda want to protect it right now," she recently told Us Weekly, confirming that someone is not Sean. "I'm not quite ready to put it all out there, everyone in my life that knows me knows what’s happening. I don't think I've smiled so much. It's good. I know if you look at social media, it seems really like crazy, but things are really good in our house right now."

Even so, she explained to the magazine that she and Sean are still married and have "every intention" of staying together. "I know it's hard for people to understand. 'They're splitting two homes, so they must be unhappy,'" she added. "But I guess what I want to say is we're living in two homes because we want to stay married. And is this forever? I doubt it. My gut says no, but I'm gonna live today today, and I'll worry about tomorrow tomorrow."

Braunwyn went on to explain she had discovered some things about herself she wants to "explore a little more" and that Sean has been "very supportive," as she allows herself to "live authentically," for the first time in 42 years.

During an Oct. 21 Watch What Happens Live with Andy Cohen appearance, she explained that "a lot of" the issues surfaced while quarantining amid the novel coronavirus pandemic. "We're getting along better than we ever had, but we are redefining our marriage right now," she said, crediting fellow guest Glennon Doyle's book, Untamed, for changing her life. "There's some things that I am going through that I'm giving myself the time and the space to acknowledge, and Sean's been very supportive in all of this."

She echoed those sentiments to Access Hollywood, adding that she's also "coming to terms with different parts of my sexuality that I never gave myself the grace to consider."

As for co-parenting their seven children, she told Us Weekly that Sean is very much involved, in addition to being her first phone call in the morning and her last call at night. "He's there all the time. He's there for pickup. He's there," Braunwyn said. "If anything, he's still around the kids as much as he was before; it's just he's sleeping somewhere else at night."

More like this
Everything To Know About 'RHONY' Season 14
By Jake Viswanath, Alyssa Lapid and Brad Witter
RHOP’s Robyn Dixon Explained Why Juan Paid For Another Woman's Hotel Room
By Brad Witter
Rachel Fuda Gave Birth Just Weeks Before 'RHONJ' Season 13
By Brad Witter
Yes, That's Christina From 'The Bachelor' In Taylor Swift's "Fifteen" Music Video
By Brad Witter
Get Even More From Bustle — Sign Up For The Newsletter
From hair trends to relationship advice, our daily newsletter has everything you need to sound like a person who’s on TikTok, even if you aren’t.