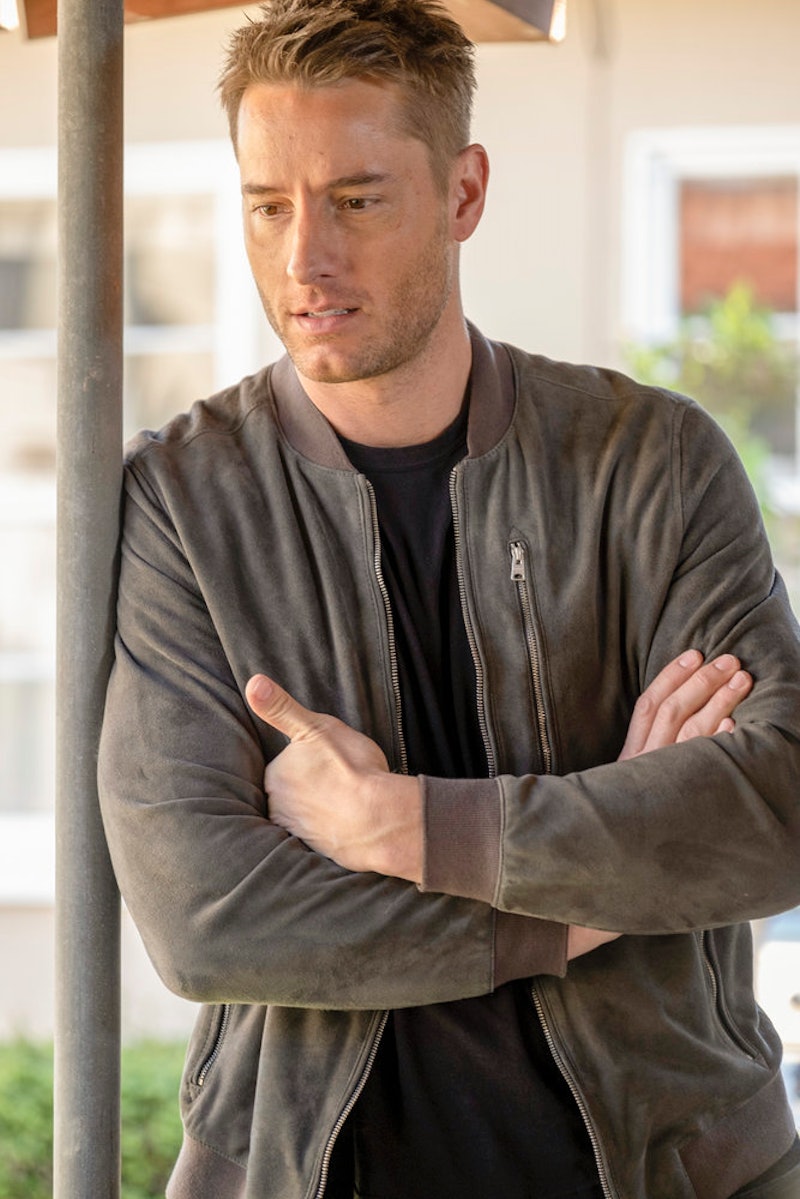 Spoilers ahead for the This Is Us Season 4 finale. Just when you think you have This Is Us figured out, creator Dan Fogelman throws in another plot twist. When Kevin and Madison hooked up in "A Hell of a Week: Part Two," fans knew she could be the mother of his son, so the official news of her pregnancy wasn't a huge surprise. The real curveball here is that Kevin and Madison have twins — a son and a daughter, both of whom appear in a new flash-forward featured in the Season 4 finale.

The scene is an extension of the one in "Her," where the family gathers at Kevin's house — the cabin his father always dreamt of building. Together, they care for a very sick Rebecca, and in the new footage, Kevin is comforted by his 10-year-old kids. "Hey kiddo, how are ya?" he says as his son walks through the door. Kevin wraps him in a hug, his sister following close behind. "Are you OK?" she asks. "Yeah, I'm OK," Kevin answers. So far, Madison is nowhere in sight.

However, in a previous flash-forward to the Big Three's 40th birthday, Kevin spoke briefly about his pregnant fiancée, which at that point had to have been Madison. "She was this person saying the right things to him and she wasn’t turning him away," Justin Hartley, who plays Kevin, told People in January. "She was there for him too and consoling him in a time of need. So we’ll see.”

The pair could have went from being family friends to falling in love, which is what Kevin always wanted. Still, Madison initially had doubts and was prepared to be a single parent — especially because her experience with bulimia severely lowered her chances of conceiving again.

"I know I am a complete stranger to you. I'm just your sister's friend and I honestly know nothing about you other than how much you love your high school girlfriend," she told Kevin. "I've decided I'm going to through with this. You don't know my medical history but this is kind of a miracle for me. But I need you to know I will not ask anything of you. Emotionally, financially, all of it. You can still find the great love story you deserve."

While telling him this, Madison had no clue that Kevin just ended a huge fight with Randall that would ultimately estrange them, although they seem to be semi-cordial in the latest flash-forward. "I'm so sick of chasing ghosts," he told her. "I'm tired of doubting myself. I'm all in, Madison. Whatever you need, I am all in. I want this ... I want to be a father. I think I'd be great at it. The love of my life will be my child."

Maybe he and Madison keep it that way, choosing to co-parent their twins together without ever actually falling in love. Or maybe raising kids together brings them closer, resulting in marriage eventually. For now, fans will just have to wait to find out how their relationship evolves.

This article was originally published on March 25, 2020