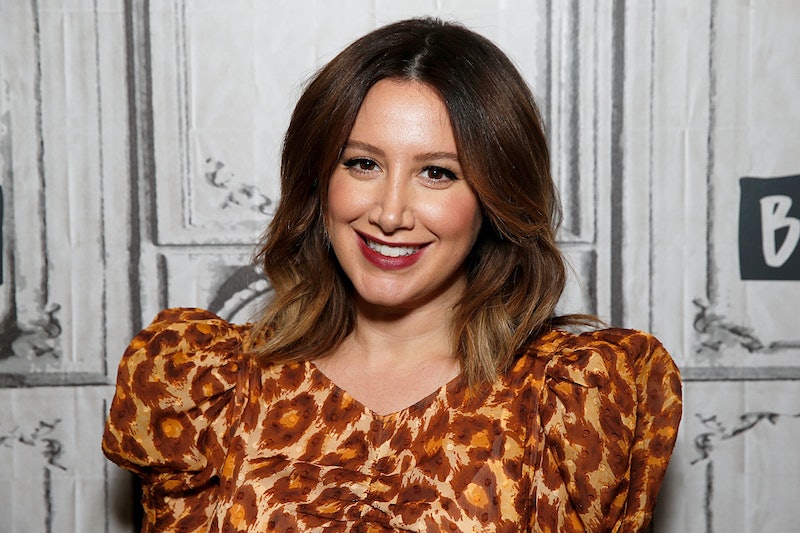 Sharpay has a baby on the way! On Thursday, Sep. 17, Ashley Tisdale announced she's expecting her first child with her composer husband Christopher French. The High School Musical star shared the news with a caption-less Instagram post featuring a photo of her standing with French and cradling her baby bump. And she's already getting love from her old Disney co-stars.

Tisdale's comments section features a flurry of congratulations from her famous friends, but one message will make your High School Musical loving heart beat just a little bit faster. Vanessa Hudgens, who played Gabriella Montez in the Disney Channel original movie franchise, was among the first to send the star well wishes. She left a short and sweet comment on Tisdale's post, writing, "Just the freaking cutest." Tisdale responded with three smiling emojis, making this a great day for both the actor's family and for HSM devotees everywhere.

So far, the former Disney star hasn't shared any other details about her pregnancy, but it seems clear that she and French are both excited. He shared another photo from what appears to be from the same day on his own Instagram. The couple's happy news comes four years after they said "I do" in a September 2014 wedding.

In the past, Tisdale has been open about waiting for the right time to start a family. In July 29, the Merry Happy Whatever star told People, "Whether you’re traveling or you have work or education or you're married and not ready to have a kid yet, there are options out there. For me, it’s like, it’s okay to not want to start a family right away. People are always asking me about that, but it’s just not the right time."

Since then, it seems Tisdale and French have decided that now is the time to start their family, and their parenthood journey is beginning at a time when their marriage is stronger than ever. The actor recently shared with People that quarantining with her husband hasn't been a struggle, despite the pair being married for four years. "Being in quarantine together, it's still that easy," she said. "It's still hanging out with your best friend."

More like this
The 'Kenan & Kel' Reunion On 'SNL' Took A Dramatic Turn, Thanks To Keke Palmer
By Brad Witter
Paris Hilton’s Tweet About The 2006 “Holy Trinity” Photo Will Make You Feel Old
By Marina Watts
The First Trailer For 'That '90s Show' Includes So Many Nods To The Original Series
By Jack Irvin, Alyssa Lapid and Grace Wehniainen
Lindsay Lohan Just Recalled A Hilarious 'Parent Trap' Story
By Sam Ramsden
Get Even More From Bustle — Sign Up For The Newsletter