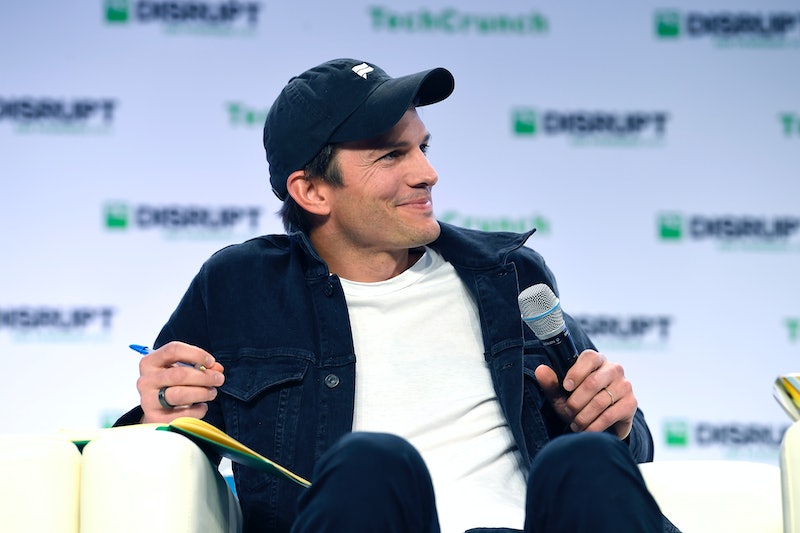 Ashton Kutcher showed up on ESPN’s College GameDay to support his alma mater, the University of Iowa Hawkeyes, during their Sept. 11 game — but given that the game was hosted at Iowa State, aka in enemy territory, the actor wasn’t exactly showered with support at his quasi-homecoming. Fans took a playful but personal approach to heckling Kutcher during his time on the show, tying their taunts back to his now-infamous comments about hygiene.

First, if you managed to skip out on the celebrity shower discourse this summer, a brief recap: During a July 19 appearance on Dax Shepard’s Armchair Expert podcast, Kutcher and wife Mila Kunis opened up about their family’s bathing habits. “If you can see the dirt on them, clean them,” Kutcher said of their kids. “Otherwise, there’s no point. ... I have a tendency to throw some water on my face after a workout.”

“I don’t know if you need to wash your face,” Shepard chimed in, saying that he’d like to try a 30-day experiment where he and his wife, Kristen Bell, “don’t f*ck with soap on the face or the rest of the body.” Though Kutcher’s original comments seemed to be more lighthearted anecdote than, say, a manifesto against showers, they still came back to haunt him at the Iowa game. Video shared by Barstool Sports shows Kutcher trying to talk about his current charity endeavor, Outside Wine, but then being drowned out by Iowa State fans urging him to “take a shower.”

The chants were intelligible for TV viewers, but it was unclear whether or not Kutcher himself understood the rival fans’ message. “Ain’t no f*ckin way he ain’t hear that,” one person tweeted in response to the clip. Another argued the opposite perspective, writing, “He heard it. You can tell. He had to remember what he was saying at the end.” (Fortunately for Kutcher, the crowd’s chants didn’t deter the University of Iowa team from nabbing a 27-17 victory over the Iowa State Cyclones.)

Since that first podcast exchange, the world has learned more about celebrity shower habits than perhaps anyone ever needed to know — even Jake Gyllenhaal got in on the discussion, telling Vanity Fair in August that he “more and more [finds] bathing to be less necessary, at times.” Though the Spider-Man: Far From Home actor acknowledged that “good manners and bad breath get you nowhere,” he went on to say that “there’s a whole world of not bathing that is also really helpful for skin maintenance, and we naturally clean ourselves.”

Kutcher might have some supporters in his corner on the showering issue, but when it comes to sports rivalries, some people just fight a little dirty.

More like this
'Breaking Bad' Duo Walt & Jesse Are Back — In This Super Bowl Commercial
By Jake Viswanath
David Beckham’s Controversial Qatar Deal Skyrocketed His Net Worth
By Catharina Cheung
Michael B. Jordan Tackled His "Public Breakup" With Lori Harvey On 'SNL'
By Brad Witter
Andy Cohen Apologized To Larsa Pippen After A 'RHOM' Season 5 Reunion Dust-Up
By Brad Witter
Get Even More From Bustle — Sign Up For The Newsletter
From hair trends to relationship advice, our daily newsletter has everything you need to sound like a person who’s on TikTok, even if you aren’t.