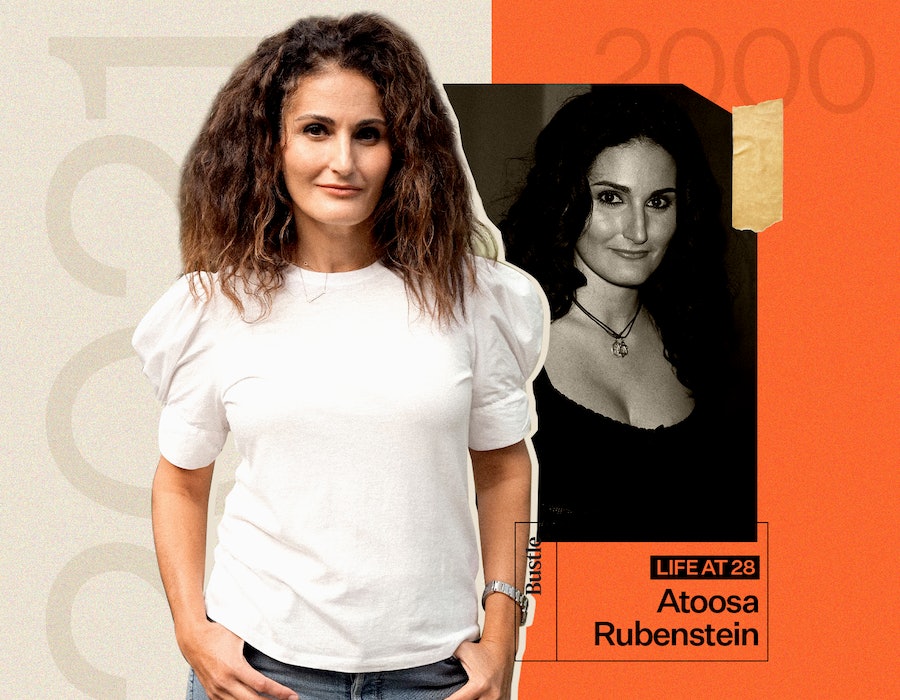 In Bustle’s Q&A series 28, successful women describe exactly what their lives looked like when they were 28 — what they wore, where they worked, what stressed them out most, and what, if anything, they would do differently. This time, former Seventeen and CosmoGIRL! editor-in-chief Atoosa Rubenstein reflects on the year she first felt like she embodied her role.

When she launched CosmoGIRL! at 26 years old, Atoosa Rubenstein became the youngest editor-in-chief in Hearst Magazines’ history — but she was 28 when she hit her stride at the top of the masthead in 2000. The fledgling magazine had only been able to land “B-list celebs” for the glossy’s cover until an up-and-coming boy band turned the tides. “Terry Iacuzzo, who’s a world-famous psychic, came to visit us at the office one day. I was like, ‘Terry, what the f*ck [can I do] to make this magazine sell better?’ And she just looked at me and said, ‘Are you shooting a group of boys for the cover? I'm seeing boys with puppies,’” Rubenstein, 49, tells Bustle. “We were f*cking shooting a sort of newish band called *NSYNC for a two-page profile on the inside. So I called the creative director and I was like, ‘Get puppies on the shoot now!’ And they did.”

In the years that followed, Rubenstein took the helm at Seventeen, created the MTV series Miss Seventeen (in which 17 girls competed for the titular honor), and became a frequent guest judge on America's Next Top Model. But by 2006, Rubenstein had walked away from the media world to launch a production company and raise her children. She never looked back.

That is, until she discovered the Instagram account @thankyouatoosa. Run by writer Casey Lewis, the account is a self-proclaimed “ode to teen magazines and Atoosa Rubenstein,” with a grid full of painfully nostalgic spreads starring the likes of Mischa Barton, Amanda Bynes, and a pre-Glossier Emily Weiss (plus a number of Rubenstein’s beloved editor’s letters, for good measure). “Casey just really breathed life into me and reminded me of who I am,” says Rubenstein. “I continue to be so proud of the teams that I worked with, so seeing their designs and their fashion layouts [has caused] a lot of kvelling and pride.”

The account also inspired Rubenstein to get back to her roots, writing columns that make her devotees everywhere feel truly seen. Ever on the cutting edge — CosmoGIRL! was the first magazine to launch with its own website — Rubenstein is using Substack for her new venture, Atoosa Unedited. Landing right in readers’ inboxes, the newsletter has inspired fans to reach out to her directly with their struggles, triumphs, and burning questions. “It’s this intimate space [where we’re] having conversations via email,” she says. It’s “retro,” much like the days when she was posing teen heartthrobs with Shar Peis. Below, Rubenstein discusses her love of Eminem, her experiences with burnout, and the time she left the Met Gala early.

God, things were great. The year prior, I had been really working on CosmoGIRL!, and it was a very grueling time. Not to say that 2000 wasn't, but the magazine was out, we were starting to get good people on the cover, and my life was starting to change. Suddenly, the media interest in me grew. I won some Ad Age award. I was 40 under 40 in one magazine, 30 under 30 in another.

One of the things that I really struggled with in my childhood was that nobody paid attention to me at home. I was not a planned pregnancy and my siblings were much, much older. We had a tough time financially, so I was just alone a lot. So to suddenly get all this attention felt really, really good, but in a way [where it] was almost making up for something that it could never make up for.

I imagine it was almost intoxicating.

I think you're right. I just loved [the press], so I knew how to get it. I learned how to be what they wanted. And therein started a relationship that in the end I felt uncomfortable with. But at that time, it was just like good news and more good news.

Did you splurge on anything to celebrate?

I got my first car ever. It was a black Porsche and that was the year Eminem’s The Marshall Mathers LP came out, so I’d drive around blasting that album. It rocked my world. I also bought a lot of fabulous clothing because by the time I was 28, I had a clothing allowance [from Hearst]. I want to say it was 10 grand, and I remember I had [a personal shopper] Doris who was a legend at Barney’s, and I would go and blow that clothing allowance in like one sitting.

What was your management style like at the time?

I had a lot of creativity and vision, but I was a fashion editor. I just didn't have management experience. I didn't know how the rest of the magazine was put together. [I didn’t know about] the words. When I first got the job Kate [White], the editor of Cosmo, said, "Oh, you should email these editors and ask them for their opinion on who you should hire as feature [editors], because they might have some sore feelings that they didn't get [your] job.” I sent a very nice email and one of them accidentally wrote back to me saying, “It looks like the fashion girl needs a grammarian." And then she ran into my office and was like, "Oh, I was so mean to you, by accident." Not that she said anything terrible, but I felt vulnerable. So how did I lead? I led with vulnerability.

It surprises me “the words” felt foreign to you, because what people so loved about your magazines were the editor’s letters you wrote. How did you begin to hone your voice?

That’s because it was a spoken magazine. I’m dyslexic so I would read everything out loud. I would have many, many more rounds of copy than probably any other magazine, because for me, it was like a pentameter. The cadence had to be right. If anybody in the process took a word out or changed a word [and] the flow was off when it was read out loud — then I didn't care if we were shipping, I didn't give a f*ck if there was a deadline. I would tell people, "We are making this for that f*cking girl, and I don't give a sh*t where you want to go." In that way, I was very hard to work for. But on the flip side of it, they knew it was never about me. I had an outsized commitment to the reader.

What was a typical Friday night like for you?

Honey, I worked seven days a week. There would be days that I’d definitely pull all-nighters in the office. And I remember when I was 28, a big article came out in The Observer. I remember that the head of PR for [Hearst] called a meeting and was like, "They’re going to be going after a burnout angle. That you're working so hard that you're going to burn out. We have to nip that in the bud." I remember they were concerned about that because I was at the Met Ball one year and I had a call at like 9:30pm, so I went back to the office. And that was me. I was working all the time. In some ways, I felt almost like I had to earn my keep.

The other editors-in-chief were way older than me, and in some ways, I could tell they just looked at me like, "What? Going back to the office?" But my husband would bring me food late at night like McDonald's. I loved McDonald's. I was a big kid. Whenever we could get away, we would do things like go to Cedar Point in Ohio so I could ride roller coasters. There was a kid in me that never had fun, because of the kind of childhood I had. I had very nice parents, don't get me wrong. But now that I finally had a little money, I just wanted to do those [kid] things.

I would just say you don't have to do any of this to deserve love. I think the thing that was driving me to work outrageously long hours — which then in turn, made my team work outrageously long hours — was that this was how I got attention from my mom finally. She loved all of it. And I just worked so hard. But I was young and beautiful and I should have been having plans on Friday nights. I should have been “living the life.”

Has there been a moment in your career when you felt like you truly made it?

One morning [in 2006] my husband and I woke up at noon and we were just going to go out for brunch. Back then, you had flip phones and if your flip phone was in the wrong place in your apartment, you'd have no service. So my phone didn't ring all night or all morning, but as we were going to brunch, my phone was blowing up. I was like, “What the f*ck?” I had been spoofed on Saturday Night Live the night before. Maya Rudolph had played Anoosa Rosenfeld, the teen magazine editor. That was really interesting.

More like this
At 28, Sharon Horgan Was Hoping To See Damon Albarn At The Pub
By Samantha Rollins
The BBC Is Adapting A Best-Selling Novel About A Mistaken Killer
By Darshita Goyal
What Joyce Carol Oates Knows About Fame
By Erin Somers
She Founded American Girl To “Bring History Alive.” Then She Made Over A Town.
By Amanda FitzSimons
Get Even More From Bustle — Sign Up For The Newsletter