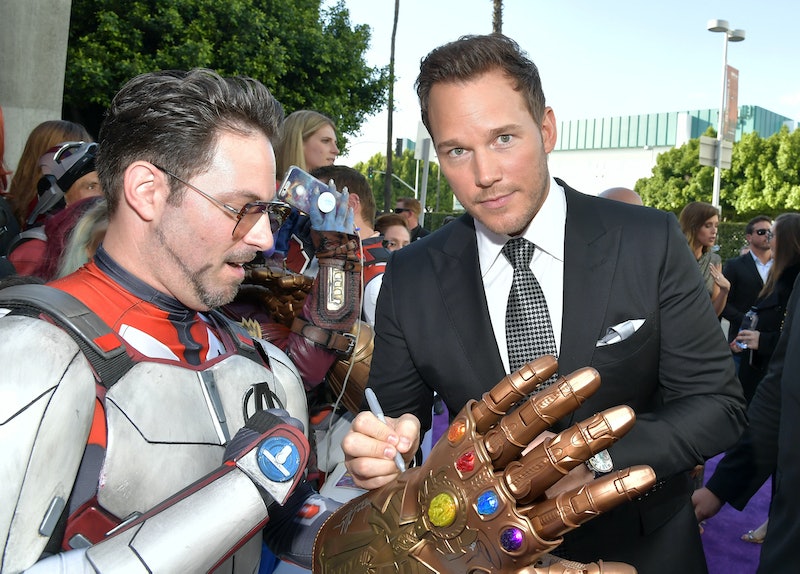 After a tweet comparing several famous actors named Chris turned into Chris Pratt being dubbed "Hollywood's Worst Chris," the Avengers cast has come to his defense. Fans aren't having it, though, arguing that the Marvel Cinematic Universe actors remained silent when co-stars like Brie Larson and Zendaya faced much harsher abuse online.

On Saturday, Oct. 17, filmmaker Amy Berg tweeted photos of four of Hollywood's most famous “Chrises” — Chris Hemsworth, Chris Evans, Chris Pine, and Pratt — with the caption, “One has to go,” as part of a popular Twitter meme. Many agreed that the Guardians of the Galaxy actor is their least favorite, citing his public silence on political matters and his reported decision to attend Zoe Church, which allegedly holds anti-LGBTQ beliefs. Some users also noted that Pratt missed a fundraiser for Joe Biden and Kamala Harris attended by some of his Avengers castmates, prompting speculation that he supports Donald Trump.

Pratt has not yet responded to the backlash directly, but following the debate, some of his Avengers co-stars took to social media to defend him. Robert Downey Jr. posted an Instagram photo of him and Pratt on set, writing that his castmate is “a real Christian who lives by principle” and isn't deserving of the backlash. "If you take issue with Chris, I’ve got a novel idea," he wrote. "Delete your social media accounts, sit with your OWN defects of character, work on THEM, then celebrate your humanness."

Mark Ruffalo also stood up for Pratt, taking to Twitter to call the backlash a "distraction" from more important matters. "You all, @prattprattpratt is as solid a man there is," he tweeted. "I know him personally, and instead of casting aspersions, look at how he lives his life. He is just not overtly political as a rule." Zoë Saldana also joined in on Twitter. "Your family, friends, colleagues & everyone who's ever crossed paths with you knows your heart and your worth!" she wrote to the actor.

Many Marvel fans were disappointed in Downey Jr., Ruffalo, and others for quickly coming to Pratt's defense over a seemingly innocuous viral tweet. Several Twitter users also found it particularly upsetting that these actors were silent when fellow MCU stars like Brie Larson faced worse backlash after voicing her political beliefs and advocating for diversity in Hollywood.

Fans also pointed out how Zendaya was criticized for playing an MCU character that was originally white, and Anthony Mackie was bullied after being named the new Captain America in Avengers: Endgame. In those instances, Downey Jr. and Ruffalo chose to remain silent, despite the much more heated backlash those stars received.

Needless to say, this perhaps wasn't the best time for the Avengers to assemble.

More like this
The Sean Bean Intimacy Coordinator Controversy, Explained
By Sam Ramsden
Twitter Is At Odds Over Taylor Swift’s Possible ‘All Too Well’ Oscar Run
By Brad Witter
Revisit 1992’s 'A League Of Their Own Cast' Photos After The New TV Series
By Grace Wehniainen
Ezra Miller Apologises To Everyone "Alarmed & Upset" By Their Behaviour
By Sophie McEvoy
Get Even More From Bustle — Sign Up For The Newsletter