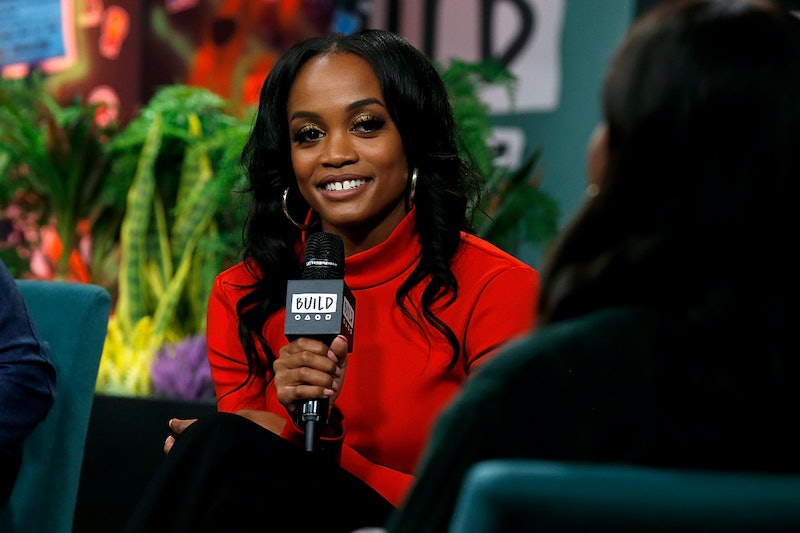 Fans of The Bachelor franchise are taking a stand in support of the Black Lives Matter movement. In a new online campaign, which launched Monday, June 8, Bachelor fans are demanding that ABC cast leads and contestants of color in a much more consistent and equal way than what the network has demonstrated in the past. Titled The Bachelor Diversity Campaign, the petition was initially created by 10 viewers who connected through a Facebook page and are seeking to bring some much-needed racial equality to the franchise. Over 40 seasons, the Bachelor franchise has only ever had one Black lead, and fans want that to change right now.

The campaign, which includes a petition on Change.org, requests that ABC "consistently cast BIPOC (black, indigenous and people of color)" when selecting contestants for both The Bachelor and The Bachelorette. It also wants The Bachelor to cast a Black lead for the upcoming 2021 season, provide more screen time to non-white contestants, and hire a diversity consultant. These requests come on the heels of the hundreds of protests taking place across the country in support of the Black Lives Matter movement in the wake of George Floyd's cruel and unnecessary death at the hands of the police.

"Representation matters, and it is one of the most important ways our country can embrace its diversity and evolve," the group wrote in an official statement, as per USA Today. "We will use our power as viewers and fans to hold ABC and Warner Bros. accountable and demand they use their platform in a more thoughtful, race-conscious, and socially responsible way. It’s time that ABC, Mike Fleiss, and Warner Bros. take demonstrable action to address the inequalities in casting, screen time, and employment of minority groups." Bustle reached out to ABC for comment about the campaign, but did not receive an immediate response.

The petition is gaining some serious traction and comes just before the network prepares to launch The Bachelor: The Greatest Seasons — Ever!, the franchise's response to delays in the new season of The Bachelorette, which was postponed due to coronavirus. The new show will be a round up of some of the most memorable and dramatic seasons from the franchise, which, naturally, will focus on predominantly white couples.

Fans have flocked to the campaign, and even Bachelor alums are beginning to speak out in support, including Ashley Spivey, a contestant from Brad Womack's 2011 season and Tyler Cameron, Hannah Brown's runner-up during last year's season of The Bachelorette, who posted about the petition on his Instagram Story.

This isn't the first time the Bachelor franchise has come under fire in regards to racial inequality. Rachel Lindsay, who served as the show's one and only Black lead in 2017, has spoken out several times about how the show needs to do better. “It was sad for me to look around the room and [see that] no one else looked like me,” Rachel told Us Weekly back in 2019 regarding her time on the show. “It was sad for me to be the sole representation for women of color.”

Rachel also echoed the campaign's demands during the latest episode of Afterbuzz, stating that a Black Bachelor needs to happen for Season 25 or she will no longer want to be affiliated with the show. “I don’t know how you are a part of The Bachelor franchise and you’re watching what’s happening in our country right now and you don’t self reflect that you’ve been part of the problem,” she explained. “You continue to perpetuate this type of behavior when you’re putting out something that is very white-washed and doesn’t have any type of color in it and you’re not trying to be effective and change that.”

Now all that's left is for Bachelor producers to choose whether they want to listen to fans and continue on a journey of diversity, or pack their suitcases and go home.

More like this
'Love Island' Has Added Yet Another Bombshell To The Villa
By Bustle UK
Brianna Revealed Why 'The Bachelor' Premiere Was Tougher For Her Than You Saw On TV
By Brad Witter
Bachelor Zach’s “Dream Job” Has Nothing To Do With His Work In The Tech Industry
By Brad Witter
Hannah Ann Got Engaged 3 Years After 'The Bachelor' & The Proposal Was Dreamy
By Grace Wehniainen
Get Even More From Bustle — Sign Up For The Newsletter
From hair trends to relationship advice, our daily newsletter has everything you need to sound like a person who’s on TikTok, even if you aren’t.