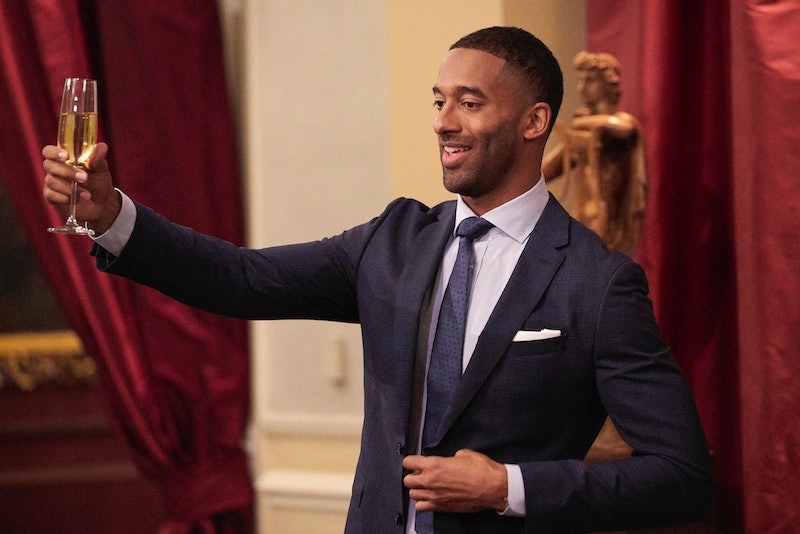 During a candid discussion about race and identity, Matt James opened up about joining the Black Lives Matter protests last summer. Matt — The Bachelor's first Black lead — appeared on the Bachelor Happy Hour podcast on Tuesday, Jan. 12, and shut down misconceptions about his mixed-race identity (his mother is white and his father is Black). He also explained how being biracial informed his decision to mobilize against the police brutality that has killed George Floyd, Breonna Taylor, and countless others.

"People think that because my mom is white, I don't associate with being Black, and my experience has been as a Black man," Matt told co-hosts Rachel Lindsay and Becca Kufrin. "My skin's Black — I don't wear a name tag or [carry] a résumé that [states] my mom is white. I'm a Black man, so I thought it was important to let people know that that's how I feel, and that's how I represent myself, and I'm going to stand with my people with what they're going through."

The 29-year-old commercial real estate broker added that it was also important to his group of friends — including Bachelorette fan-favorite Tyler Cameron — to attend the rallies with him. "They wanted to support me with that because they grew up in and around Black people. Everyone's always asking, 'What can I do?'" Matt said. "[And that's] support, come march, come see what it's about, so Tyler came with me and a handful of my other friends." He added, "It was incredible for them to see that and hear people's stories and hear what people are upset about."

Matt then evoked the insurrection at the Capitol in Washington, D.C. last week, lamenting the contrasts and privileges on display that were not extended to Black Lives Matter protesters. "We have that perspective of what it looks like to peacefully protest and what our experience has been like as opposed to [the Capitol rioters]," Matt said. "[We] see that they were treated differently than people who were peacefully protesting with us in Florida and other cities across the country."

Additionally, the franchise's new lead opened up about the pressures that come with stepping into that position. "I know that when people watch me, they're going to [think], 'Oh, that's how Black people act; that's what a Black relationship looks like; why did you do that? Do all Black people do that?'" he said. "And that was a big pressure that I put on myself when I first got there. I just felt this responsibility that I've got to make everybody proud." Matt said something similar to host Chris Harrison in the premiere episode, too.

More like this
'Bachelorette' Vet Clare Crawley Revealed Her Stunning Wedding Photos
By Stephanie Topacio Long
'Bachelorette' Vet Clare Crawley Unveiled 2 Special Wedding Day Accessories
By Stephanie Topacio Long
Hannah Ann Got Engaged 3 Years After 'The Bachelor' & The Proposal Was Dreamy
By Grace Wehniainen
All The Clues About Aly & Zach’s Relationship Status After 'The Bachelor'
By Brad Witter
Get Even More From Bustle — Sign Up For The Newsletter
From hair trends to relationship advice, our daily newsletter has everything you need to sound like a person who’s on TikTok, even if you aren’t.