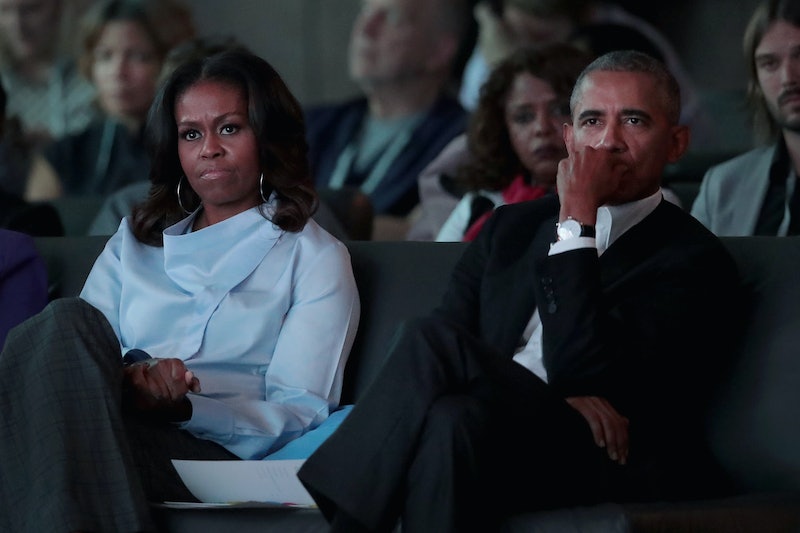 Even the strongest couples in the world have to overcome relationship struggles — including Barack and Michelle Obama. In his new memoir, A Promised Land, the former president said his marriage to Michelle was strained during their time in the White House. CNN released excerpts from the book, set to be released on Nov. 17, in which he opened up about everything from when they first met to how the presidency affected their marriage.

According to Barack, Michelle's huge "success and popularity" as the First Lady wasn't enough to calm the frustrations that came with her husband's job. Inevitably, the responsibility of leading an entire nation impacted their then-teenage daughters Sasha and Malia, as well as their entire family dynamic. He went on to describe all of her points of contention, saying:

"I continued to sense an undercurrent of tension in her, subtle but constant, like the faint thrum of a hidden machine. It was as if, confined as we were within the walls of the White House, all her previous sources of frustration became more concentrated, more vivid, whether it was my round the clock absorption with work, or the way politics exposed our family to scrutiny and attacks, or the tendency of even friends and family members to treat her role as secondary in importance."

The former President said he soon became worried that he would never experience more light-hearted moments with his wife again. "I'd think about those days when everything between us felt lighter, when her smile was more constant and our love less encumbered, and my heart would suddenly tighten at the thought that those days might not return," he wrote.

Michelle has opened up about their marriage on many occasions, even revealing that her husband's political aspirations caused tension before he even ran for president. During a September episode of her Spotify podcast, Michelle admitted that they've hit many rough patches, but emphasized the importance of persisting through them. "There were times that I wanted to push Barack out of the window," she said. "But that doesn't mean you quit... We have a very strong marriage. And if I had given up on it, if I had walked away from it in those tough times, then I would've missed all the beauty that was there as well."

Since leaving the White House in 2017, it seems the Obamas have gotten their relationship back on track. In a 2018 interview with ELLE, Michelle revealed to Oprah Winfrey that she and Barack attended couples therapy. "You go because you think the counselor is going to help you make your case against the other person," she said. "Lo and behold, counseling wasn't that at all. It was about me exploring my sense of happiness. What clicked in me was that I need support and I need some from him. But I needed to figure out how to build my life in a way that works for me."