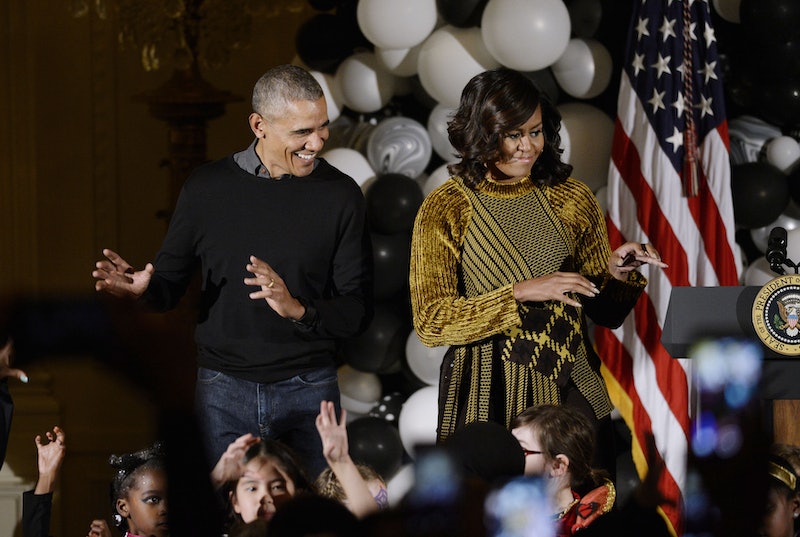 There’s nothing that says “summer” more than the ocean, barbecues, and Barack Obama’s annual playlist. Yes, you read that correctly: no one curates a better summer soundtrack than the former President himself, as Barack Obama’s summer 2020 playlist proves. The playlist features songs from a huge array of artists, and has enough songs to cover all your summer moods. In other words, it has everything, from fresh new bops to nostalgic favorites, and of course, a healthy dose of Beyoncé.

The former POTUS revealed the latest iteration of his beloved playlists on Twitter on Monday, Aug. 17, just before the kick-off of the 2020 Democratic National Convention. To mark the historic occasion, he started the list with his favorite tracks from some of this year's DNC performers, including Billie Eilish’s "my future," The Chicks’ "Gaslighter," John Legend’s "Don’t Walk Away," Jennifer Hudson's "Feeling Good," and Maggie Rogers’ "Love You For A Long Time."

Obama shared that he's spent "a lot of time listening to music" with his family in the past few months (what else is there to do while in quarantine?). "I wanted to share some of my favorites from the summer—including songs from some of the artists at this week's @DemConvention," he wrote. "Hope you enjoy it."

Of course, his other picks were just as diverse and expertly curated as we've come to expect from Obama. This year's top jams like HAIM's "The Steps," J Balvin's "UN DÍA," and Megan Thee Stallion and Beyoncé's "Savage Remix" are all on the playlist, alongside unexpected throwback jams like Sheryl Crow's "All I Wanna Do" and OutKast's "Liberation." Beyoncé actually appears twice on the playlist — Obama also including her Black Is King track "ALREADY" — while another Rihanna and Drake collab, "Work," made it this year, after their song "Too Good" appeared on his list in 2019. And, of course, old-school soul and rock-n-roll is also represented, courtesy of Bob Dylan, Nina Simone, and Stevie Wonder.

Obama's playlists are so well-received that the only people who get more excited to see it than fans are the artists who actually make the cut, and this year's crop was no exception. Megan Thee Stallion responded on Twitter with a shocked "Omg!!!" complete with fire emojis. The Chicks acknowledged their inclusion with the curious side-eye emoji, and Khalid was full of gratitude, writing on Twitter, "WOOOOW!!!!! thank you so much!!!!!" But perhaps no response summed up everyone's reaction better than HAIM, who simply tweeted, "BRB CRYING."

There truly is nothing like having Obama's stamp of approval.