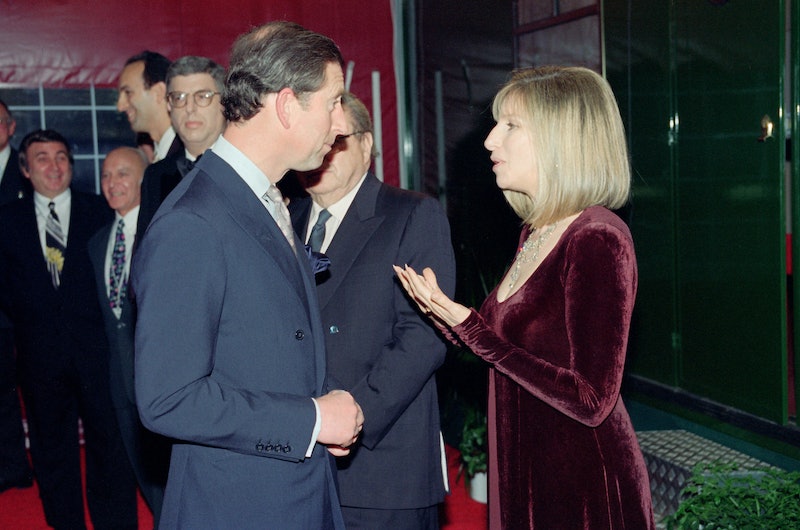 Barbra Streisand will forever be music royalty, but there was a moment in the 1970s when she believes she could have been part of the British monarchy.

In July 2021, Prince Charles hosted a show on hospital radio as part of a national Thank You Day honouring the NHS for their work during the coronavirus pandemic. After sharing his favourite tracks from the decade – which included the likes of The Three Degrees, Diana Ross, and Edith Piaf – the prince revealed he had a special affinity for Barbra Streisand.

“I have always been a great admirer of the incredibly versatile American actress and singer Barbra Streisand,” the Prince of Wales confessed. He even recalled meeting her while he was stationed on HMS Jupiter as a young lieutenant in the Royal Navy. After docking at a navy base in San Francisco, Charles heard that the actress and singer was filming Funny Lady at Warner Brothers Studios. “I was lucky enough to visit the set and to meet her there.”

The prince continued: “I shall not forget her dazzling, effervescent talent and the unique vitality and attraction of her voice of her acting ability.” Charles went on to play Streisand’s ‘Don’t Rain on My Parade’, which he described as being “full of special memories”.

In response to his comments, Streisand told Lorraine’s Ross King that she thought “it was so sweet” that he remembered that moment. The singer then elaborated their meet-cute even more, recalling the exact moment that he asked to meet her. “I remember when I was recording at Warner Brothers […] I was drinking tea and he asked to meet me,” she explained, adding “So he came to the recording studio, and I offered him a sip of tea which he took!”

Streisand went on to say that they became friends, and she even spent some time at Highgrove House in Gloucestershire for a weekend fundraiser. She even recalled Charles sending her a bouquet of flowers from Highgrove Gardens, which her assistant mistook for a fan. “It was so funny,” Streisand said. “It’s Prince Charles!”

King also mentions that this was a time when Charles was “one of the most eligible bachelors in the world”, to which Streisand shared a hilarious memory of her playing a show that Charles was attending. “I had a very funny line on stage when he came to see the show, I said, ‘Y’know if I’d played my cards right I could’ve wound up being the first Jewish princess’.”

If only Streisand, if only.