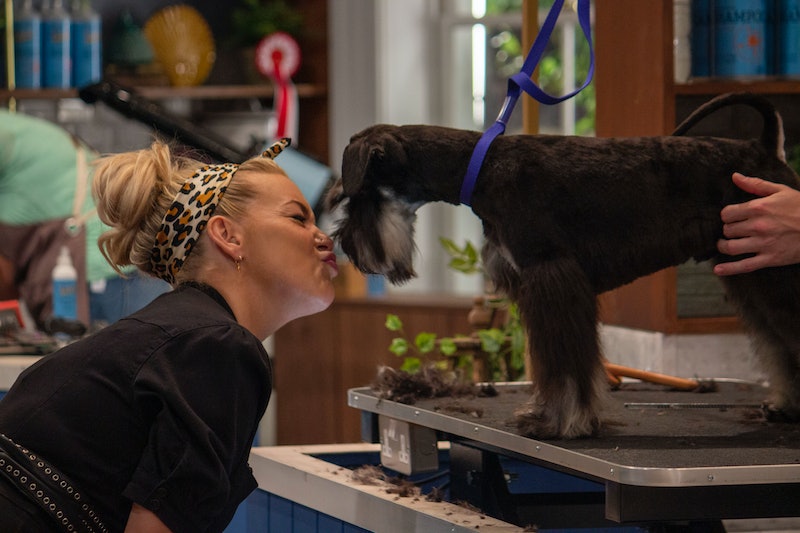 The BBC's newest competition show Pooch Perfect has been making headlines this weeks, but not necessarily for the reason producers were hoping for. The show has been met with criticism by the RSPCA, as well as animal lovers across social media. But what is the show actually all about? And what is Sheridan Smith's involvement in all this? Here's everything you need to know about new TV Show Pooch Perfect, from when it's on to where the controversy surrounding it has hailed from.

What Is The Premise Of Pooch Perfect?

Simply put, Pooch Perfect is basically The Great British Bake Off or The Great British Sewing Bee but for dogs. And no I don't mean that dogs will be running around perfecting their blind baking or their running stitch; it's still the humans that will be put to the test. Pooch Perfect is a grooming competition, meaning 16 professional dog groomers will be put through their paces to see who comes up trumps each week, and then overall.

The contestants will show off their weekly grooming creations on the 'dogwalk,' and will be judged by pros Colin Taylor, Verity Hardcastle, and vet Bolu Eso. Pooch Perfect will run for a total of eight weeks.

How Is Sheridan Smith Involved?

Sheridan Smith is presenting the show, and it makes sense given that she's a huge dog person. In fact, the star already has six at home. She will be appearing alongside her pup Stanley weekly on the series.

Why Has Pooch Perfect Received Criticism?

Now, here's where things get a bit controversial. Pooch Perfect has not only received criticism from folks on Twitter, but the RSPCA has even gotten involved, sharing their concerns that the show could encourage the attitude that dogs are to be seen as fashion accessories.

Speaking to Metro, Dr Samantha Gaines, head of the companion animals department at the RSPCA, explained that grooming is an important part of dog ownership. Grooming "can impact on a dog’s health and happiness such as their movement, how easily they can see and breathe, and how they stay cool." However, she worries the programme may be putting too much emphasis on the aesthetic factor to grooming.

Explaining that she is "disappointed with elements" of Pooch Perfect, she told the newspaper: "Sadly, the importance of dogs’ appearances has already come at the expense of dog welfare and many breeds now suffer from serious health conditions as a result of the way they’ve been bred to look a certain way.

"It’s important that programmes like this do not further perpetuate the idea that dogs are ours to objectify and treat as toys or fashion accessories."

Despite this, Gaines revealed that she was "very pleased that there was a veterinarian and an animal welfare consultant involved early on in the production and present throughout the filming.

"This specific expertise is critical in helping safeguard the welfare of animals used in these types of programmes," she added.

A statement sent to Metro from a BBC spokesperson assured those concerned that "throughout the filming of Pooch Perfect, the care and wellbeing of the dogs was of the upmost importance. On set we had an RSPCA approved Animal Welfare Consultant, a Grooming Consultant, and a Vet, to ensure that we put every precaution in place to keep the dogs safe and well."

They added: "Every owner was asked if they were happy for their dogs to have some temporary colour put on them. When colour was used it was kept to a minimum, it washed out almost immediately and was only used in the minority of challenges to demonstrate specific areas of skill and creativity. All the products used were animal safe and temporary and they were used."

When Is Pooch Perfect On?

Pooch Perfect has already started on BBC One. The first episode aired on Jan. 7 at 8pm, but all episodes are available to catch up on on BBC iPlayer after their airing.