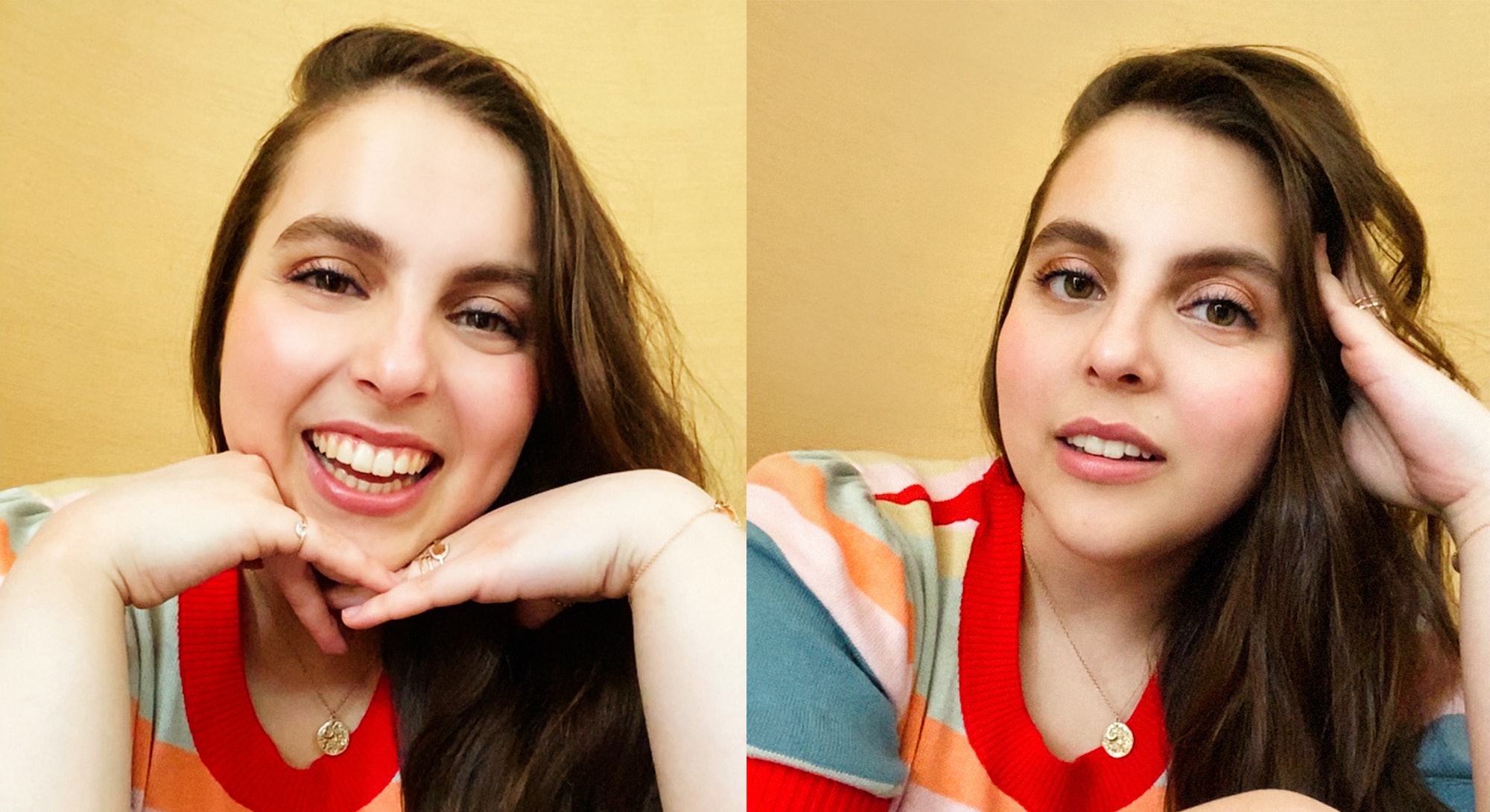 Did you know it’s possible to be good at Zoom? Beanie Feldstein is remarkably easy to video chat with: constantly making eye contact, ready to smile, eager to make you laugh. Yes, she is an actor and a self-described extrovert, lover of people, and human teddy bear (the last one is her Instagram bio). Still, it’s uncanny to feel warmth through a laptop screen.

Five minutes into the interview, she throws off her pastel, ribboned headband. We have both admitted it’s nice not to have to wear pants anymore to work.

“I feel very, very, very grateful every day that I wake up feeling fine,” Feldstein says of our current reality. “I’m just trying to be thoughtful because I feel like that is the only thing you can really do. Just follow the rules strictly and then also bring attention to people that are helping.”

It can be hard to promote art when you’re overwhelmed by a never-ending pandemic news cycle, but Feldstein, 26, is gamely talking about her latest film, How to Build a Girl, an adaptation of the Caitlin Moran novel. I ask what it was like to work on another movie about teen girlhood and the importance of friendship, a genre Feldstein mastered in Lady Bird and Booksmart. Feldstein says that it’s really a movie about forgiving yourself for mistakes and the inherent bravery in allowing yourself to change, again and again. The part of Johanna, her first leading role, has her in casual sex montages, cutting co-stars down to size, and wearing a plastic bag as an improvised bikini. (The role is also how she met girlfriend Bonnie Chance Roberts, a producer of the film and whom Feldstein has described as her first love.)

"I’ve never really considered myself a brave person, but that was brave.”

“So many things made me nervous [on this film],” she says, “but whenever I got nervous, I just was like, ‘If someone had been brave enough, or had been given the opportunity, to make this and I could have seen it at 14, I would have been changed. Or I would’ve felt more accepted or more at ease way earlier in my life.” It’s not that Johanna is queer, Feldstein explains, it’s “how unapologetically the film lets her be sexual.”

“I’m a very loving person, but I am known to be a bit prude,” she says. Seeing a sex scene or a particularly breast-forward outfit on the call sheet took Feldstein out of her comfort zone, but it also put her right inside Johanna’s reckless teenage head. “It took a lot to navigate those hurdles,” she says. “I feel really proud of myself because I’ve never really considered myself a brave person, but that was brave.”

Two months into social distancing, recounting Johanna’s rock and roll escapades feels very far away from our current reality of FaceTiming friends for happy hour from our living rooms. Feldstein is currently back at home with her parents and staying in her childhood bedroom, followed around the house by Jackie the bulldog. I can see a bit of the white poster bed behind her, and the desk where she used to do homework is now her office.

When I ask how she’s been coping, Feldstein mentions Little Fires Everywhere as well as Ozark, a series she and her mother, costume designer Sharon Feldstein, have been savoring, allowing themselves one episode per day. “We just look forward to that time every night when we’re like, ‘We get to go back to Missouri!’” Watching television is mostly escapism, and a little bit homework. “I want to take notes while I watch Ozark,” she says, half joking. “Can I Zoom a lesson with one of [the actors]?”

For some 20-somethings, it would be unbearable to undergo a major professional breakthrough while retreating to the confines of childhood, but Feldstein seems to be closely in touch with her inner teen. She has favorite numbers, which she will not disclose except to say that she did spot them on a building near where How to Build a Girl was filming. Seeing them, even for a second, gave her a very good feeling. She describes acting alongside “the legendary, the queen Dame Emma Thompson” as an out-of-body experience. (“She came in wearing overalls and brought the entire crew chocolate, and it was honestly a day out of my wildest dreams.”)

Besides, having one foot in the realm of girlhood gives you access to the most powerful emotions on the planet. “The most nervous I was the whole shoot was to deliver the ending monologue. [Johanna] talks about the magic of teenage girls [in it], and it always makes me teary and emotional when I think about it,” she says.

I ask if she thinks it’s a bit like the concept of human beings as Russian nesting dolls, different version of ourselves all nestled together in one body, and she agrees. People aren’t static. Just when we think we know ourselves, we change again. “Acknowledge your mistakes and fold them into the identity of who you are, but they don’t have to define that identity,” she summarizes.