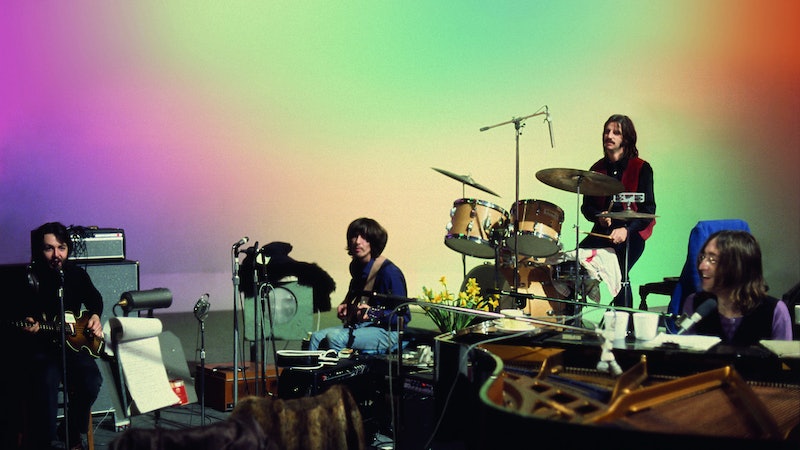 If you’ve ever been totally frustrated after a coworker hit you with a “hey, just checking in on this” email regarding a deadline you’re definitely about to miss towards the end of the work day, Disney+ has a docuseries with your name all over it.

The Beatles: Get Back, now available to stream on Disney+, follows the legendary band over a 21 day period in January 1969 in which they were stuck with the task of writing a whopping 14 new songs ahead of their first live concert in two years. Directed by three-time Oscar-winning filmmaker Peter Jackson (yup, the one responsible for The Lord of the Rings trilogy), the three-part docuseries was created from nearly 60 hours of previously unseen footage. There’s even over 150 hours of unheard audio that’s been locked in a vault for more than 50 years, but is now available on Disney+.

Even if you’re not already a major fan of The Beatles, you’ll definitely enjoy the hilarious antics they get up to during the three weeks the series covers. It’s incredible to watch the friendship between John Lennon, Paul McCartney, George Harrison, and Ringo Starr firsthand through never-before-seen footage, even as the crew deals with a stressful impending deadline. As the band attempts to create 14 hits under immeasurable pressure, their sheer talent is more undeniable than ever before. It is also the cause for plenty of moments that will make you laugh out loud (both intentionally and unintentionally) as they experiment with their musical abilities. The series culminates with The Beatles’ last live performance together in a rooftop concert on London’s Savile Row.

In addition to The Beatles: Get Back, Disney+ has plenty of exclusive titles that music lovers will appreciate including Happier than Ever: A Love Letter to Los Angeles, a Billie Eilish Concert Experience, Black Is King: A Film by Beyoncé, and Taylor Swift Folklore: the Long Pond Studio Sessions.