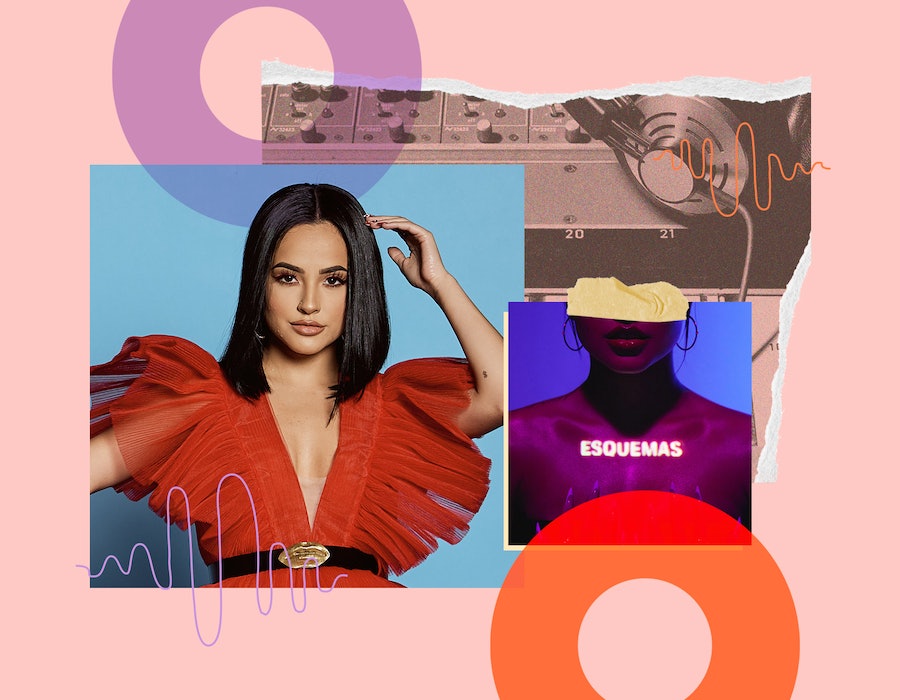 By the time you read this, Becky G’s sophomore album will be streaming worldwide, a genre-bending project called Esquemas. The Mexican American megastar is responsible for some of today’s biggest Latin hits, but she didn’t always glide between two cultures so easily. “I failed Spanish in school,” she tells Bustle, “because it was Spaniard Spanish. It wasn’t Chicana Spanish, where we use words like marqueta for ‘market,’ which I literally learned two weeks ago isn’t a real word.”

Her insecurities nearly stopped her in her tracks, but she worked with songwriters to hone her linguistic skills — people like Saul Alexander Castillo Vasquez, Steven Dominguez, and Martin Rodriguez Vincente — before releasing her first Spanish single in 2016, “Sola.”

Now, after six years, 14 awards, and an acclaimed 2019 debut album, Gomez is ready for her next act. Esquemas (“Schemes” in English), which was recorded entirely in Spanish, began its rollout in March with the TikTok-viral “Mamiii,” featuring Colombian songstress Karol G. At Coachella, the latter invited Gomez onstage to perform the track live for the first time.

The rest of the 14-track album packs a stunning punch of promiscuous reggaetón, soulful pop ballads, and club-ready dance beats, many from longtime producer Ovy On the Drums. The tracklist features fellow superstars El Alfa, Guaynaa, Natti Natasha, and Elena Rose, and feels so musically diverse that it could be a playlist on its own.

Below, Gomez discusses her transition to the Latin market, Bruno Mars, and Esquemas’ standout tracks.

On Embracing Her Roots

Growing up Mexican American, did you embrace both sides of your identity?

Like many kids who grew up the way we did, we know we rep two flags, but [expressing them] depends on who you’re in the room with. I had to choose one or the other. Growing up Chicana, being Mexican American in LA like a lot of my peers, I was the translator in elementary school. I would help my teachers understand what some of the students needed to express, or the other way around.

My biggest fear and reservation was that [Spanish] wasn’t my emotional language. I was very emotionally connected to the music, though. I’d been singing with mariachis since I was 7, 8 years old. But when a camera was in front of me, as a signed artist, I would get really in my head about, wait, does this word end in “o” or “a”?

Exactly. The first album I bought was the Christina Aguilera album where you’d listen to it in English and then the same songs in Spanish. It was like, “Oh my God. A bilingual queen! I love this!” Same with Shakira, same with JLo. I wanted to do it, but […] I didn’t want to have to use a translator in interviews, because I was singing fluently in Spanish.

Has your Spanish changed at all since you entered the Latin music market?

Sometimes my grandparents make fun of me because my Spanish accent is now a mix of every accent that exists. I’m in Miami, so my Spanish sounds like a fusion of Venezuelan, Puerto Rican, and Cuban Spanish, with a little Mexican slang in there.

What was it like working with Karol G on “Mamiii,” given that it was such a long-awaited collaboration for fans?

How long fans waited? How long I waited for that to happen. [Laughs.] I’ve asked Karol to be on songs [so many times], and it’s never been the right time. Or she’s been really honest with me, and it’s not the right song. I’ve always appreciated that about her.

How do you feel Esquemas differs from your first album?

Who’s one artist, dead or alive, you’d love to collaborate with?

What’s a song that should play at your wedding and one that you’d want played at your funeral?

[Laughs.] Oh my God, this is so sad and totally up my alley. At my funeral, definitely “Dolores.” For sure. Bring out the violins. I know everybody sees me so happy and healthy in a loving relationship, but I think they confuse that for thinking I’ve never experienced heartbreak in my life, or that I haven’t experienced heartbreak through other people. A lot of these songs are actually written about someone else’s heartbreak, which sounds really sad but was very cathartic for me.

And then, it wouldn’t be my wedding song — it’s too much of a party song — but it’s definitely being played at my wedding, and Guaynaa’s going to be there to perform it live: “Tajín.” It’s like if “Mayores” and “Fulanito” had a baby. That’s my wedding party song.