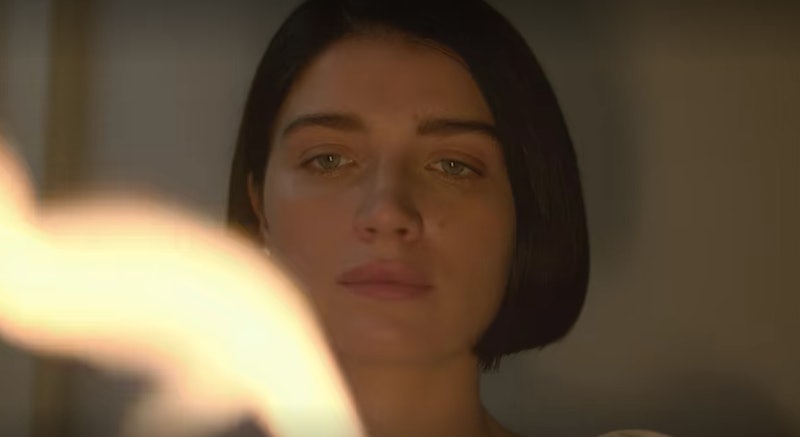 'Behind Her Eyes' / Netflix

Spoilers ahead for Behind Her Eyes series one. Adapted from the Sarah Pinborough novel of the same name, the new Netflix mini-series Behind Her Eyes is a unique take on psychological thrillers with a what-on-earth-just-happened? ending. The series sees divorced mum Louise blighted by night terrors and sleepwalking — a running theme throughout the series. After a chance encounter, Louise becomes embroiled in a twisted love triangle with her suave psychiatrist boss David and his mysterious wife Adele. As viewers come to learn, Adele had spent time in a psychiatric ward after a tragic accident but what happened to Adele's parents?

Between the haunting vacant smiles and melancholy eyes, Adele's tragic past affects her marriage and her personality — and viewers soon learn just by how much. As Louise (played by Simona Brown) and Adele (Eve Hewson) bond (despite the affair), Adele reveals that her parents were killed in a house fire when she was just 18 and David (Tom Bateman) had managed to rescue her before it was too late. Whilst grieving, she attended a psychiatric facility to help her heal and met heroin addict Rob who became her confidant.

However, as viewers of Behind Her Eyes will soon learn, nothing is as it seems in this show. So, is Adele telling the truth about what happened to her parents? There's nothing to say otherwise, but the situation around the fire remains an unsolved mystery.

Throughout the series, we seen flashes back to conversations that took place between Adele and Rob more than a decade ago. And, without spoiling it, these past memories become crucial to the storyline, which includes lucid dreams and astral projection. Yep, somewhere down the line, people start switching bodies.

Here's where things start to get very, very weird.

Needless to say, Behind Her Eyes is not a simple domestic thriller but a twisty-turny rollercoaster that will have you wondering what is up or down and, most chillingly, which of the main is really who they say they are.

For those who haven't read the book, the plot twist is a corker, inspiring the hashtag #WTFThatEnding on Twitter.

Speaking to Digital Spy, Eve Hewson revealed she didn't know the twist when she auditioned to play Adele.

"I had to do my audition in the middle of the night because I was shooting something else, and I only had time to read the first episode," she said. "So I didn't know what the twist was. And so I had a very different take on the character, and I thought it was a completely different show than it actually is."

More like this
Helena Bonham Carter Doesn't Think 'The Crown' “Should Carry On"
By Sam Ramsden
Everything To Know About The 'Daisy Jones & The Six' TV Series
By Maxine Harrison and Brad Witter
'Brookside' Is Coming Back & Soap Opera Fans Are Going Wild
By Sam Ramsden
'Magpie Murders' S2 Will Include A *Major* Shake-Up
By Sophie McEvoy
Get The Very Best Of Bustle/UK
Sign up for Bustle UK's twice-weekly newsletter, featuring the latest must-watch TV, moving personal stories, and expert advice on the hottest viral buys.