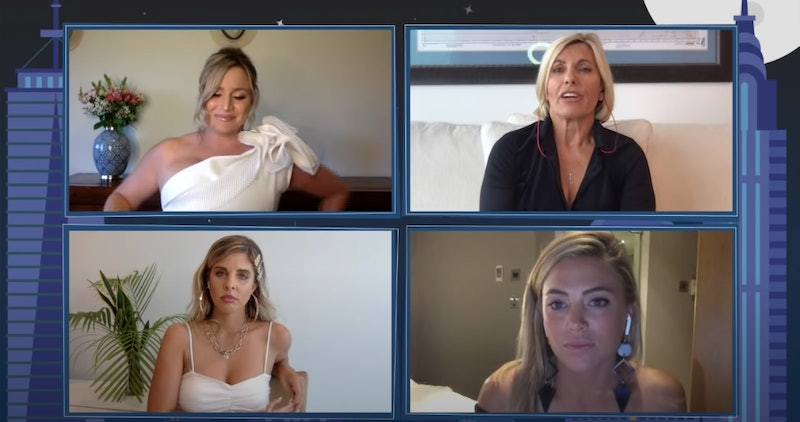 Get on board, Below Deck fans, because new episodes could be on the horizon. Bravo hasn't officially announced a Season 6 of Below Deck Mediterranean, but given the show's social media popularity, chances are the network will find a way to make it happen. The show's filming schedule, which was disrupted by COVID-19 restrictions, is unclear, but that doesn't mean the fate of the reality series is in jeopardy. The franchise, which follows the lives of young crew members on luxury yachts, remains one of the network's flagship shows, and its spinoff Below Deck Mediterranean has an equally committed following.

Should Below Deck Mediterranean return for another season, it's also unclear if some of the show's more divisive figures, including Captain Sandy Yawn and Bosun Malia White, will be back on board for another voyage. There's been speculation that filming has already begun, with Below Deck alum Adrienne Gang sharing Season 6 rumors on Twitter, which allege that charter guests are currently filming in Croatia and posting on their Instagram Stories. Those posts also allege that Sandy and Malia return next season, though again, this hasn't been confirmed.

Twitter fans are not thrilled by the prospect of another season headed by Yawn and White — or one without Hannah Ferrier and Chef Kiko — but that doesn't necessarily mean that new episodes won't film. In April, Captain Sandy Yawn hinted on the Carolina Coffee Talk podcast that Below Deck Mediterranean would film in September provided that COVID-19 restrictions allowed for it. "I'm sure [Bravo is] working very hard on it. I’m really not in that process. They include me just when it's time to go film."

In the meantime, though, fans can enjoy Season 8 of Below Deck, which premieres on Nov. 2 on Bravo.

More like this
Here's The Full List Of Zach's Confirmed & Potential 'Bachelor' Contestants
By Kadin Burnett and Grace Wehniainen
Netflix's 'Bling Empire' Season 3 Trailer Includes A 'Selling Sunset' Cameo
By Kadin Burnett and Sam Ramsden
‘The Ultimatum: Queer Love’ Is Officially On The Way
By Radhika Menon and Kadin Burnett
Khloé Kardashian Debuts Baby Boy On 'The Kardashians' Season 2 Premiere
By Jake Viswanath
Get Even More From Bustle — Sign Up For The Newsletter