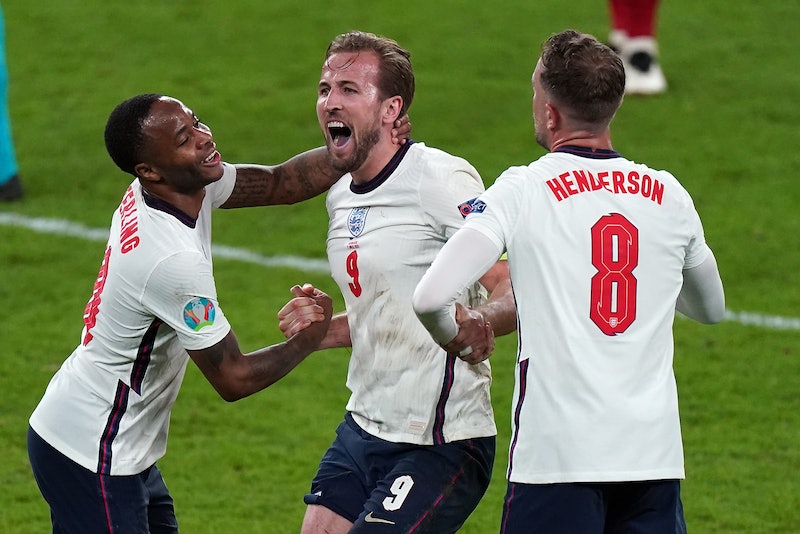 Last night, the England squad made history with their 2-1 victory against Denmark, taking them to the first major men’s tournament final since 1966. Harry Kane, Raheem Sterling, and the rest of Gareth Southgate’s team on their way to potentially win Euro 2020, and the country is understandably chuffed to bits.

Held at Wembley Stadium, the England v Denmark match was the biggest sporting event since lockdown began in March 2020. The English fans made their presence known throughout, in and outside the stadium, breaking into a chant of Neil Diamond’s “Sweet Caroline” after Harry Kane kicked that rebound goal into the net.

More than 60,000 fans at Wembley poured out onto the streets of London to celebrate England’s win, and millions of households across the country joined in with them. “I’m still trying to compute what happened, I’ve never seen England make a final,” one supporter told the Guardian in Trafalgar Square. “It’s beautiful, it’s unbelievable, I love this country, the players gave it their all. This is an historic occasion, we may never see this again – now we can start to believe.”

Unfortunately, England’s win has been somewhat dampened by misconduct from the crowd. And some fans both at home and abroad have accused the team of cheating to victory, specifically when it came to Sterling’s fall and the subsequent penalty awarded to England. Despite this, though, the jubilation could still be felt across social media, with memes flooding Twitter and Instagram almost immediately. Keep scrolling for a few of the best.

Who Do We Talk To About Making This Happen?

The Sound Of Sweet Success

And Possibly The Worst, Too...