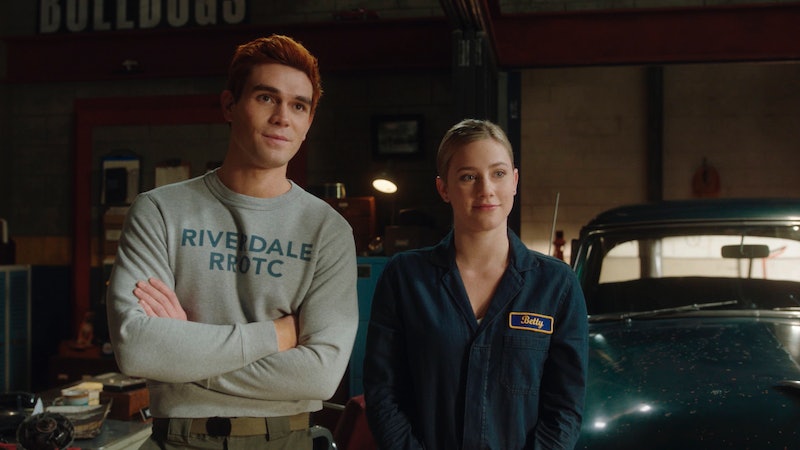 Barchie shippers, brace yourselves: after five seasons of stolen kisses and yearning glances, Betty and Archie finally had sex in Riverdale's Feb. 17 episode. It was a rather spontaneous decision: they got sweaty while cleaning up Archie's house and decided to take a shower together, admitting it was "something [they've] been wanting to do since high school but never got around to."

It's not exactly the grand romantic union fans may have been hoping for; afterward, the two decide to just stay friends. But it's nonetheless been a long time in the making. As KJ Apa has said in the past, the Betty/Archie/Veronica love triangle is "a fundamental part" of the Archie comics the show is based on, and Riverdale has been leaning into that history more and more as the show progresses. Every season has included some kind of a stray romantic moment between Archie and Betty, and though they didn't get together after their Season 5 kiss led to the breakup of both of their relationships, there are clearly some lingering feelings even seven years later.

It's likely that will continue to be explored in the remainder of Season 5. Apa has said he considers Betty and Archie endgame, and as a fan of the original comics, Cole Sprouse also ships the couple. Other producers and writers for the show have spoken to the “deep connection” between the two characters, and though they haven't confirmed who is actually “endgame” for the series, showrunner Roberto Aguirre-Sacasa recently hinted that Betty and Archie will be more than a fling.

"After seven years, I think our characters need different things than they needed in high school," he told Entertainment Tonight. "The base that we said we had in the pilot is that Archie and Betty were best friends and I think that's what's fueling their reconnection when we regather in Riverdale. And that's another way of saying that we will see them together and what they share is really deep. Really deep.”

More like this
'Happy Valley' Recreated This Moment From S1 In Its Penultimate Episode
By Sophie McEvoy
9 Time Catherine Cawood Was An Absolute Badass In Happy Valley
By Sophie McEvoy
'GoT' Star Emilia Clarke Says She "Just Can't" Watch 'House Of The Dragon'
By Brad Witter
This Dark 'Happy Valley' Theory Is Staring You Right In The Face
By Sophie McEvoy
Get Even More From Bustle — Sign Up For The Newsletter
From hair trends to relationship advice, our daily newsletter has everything you need to sound like a person who’s on TikTok, even if you aren’t.