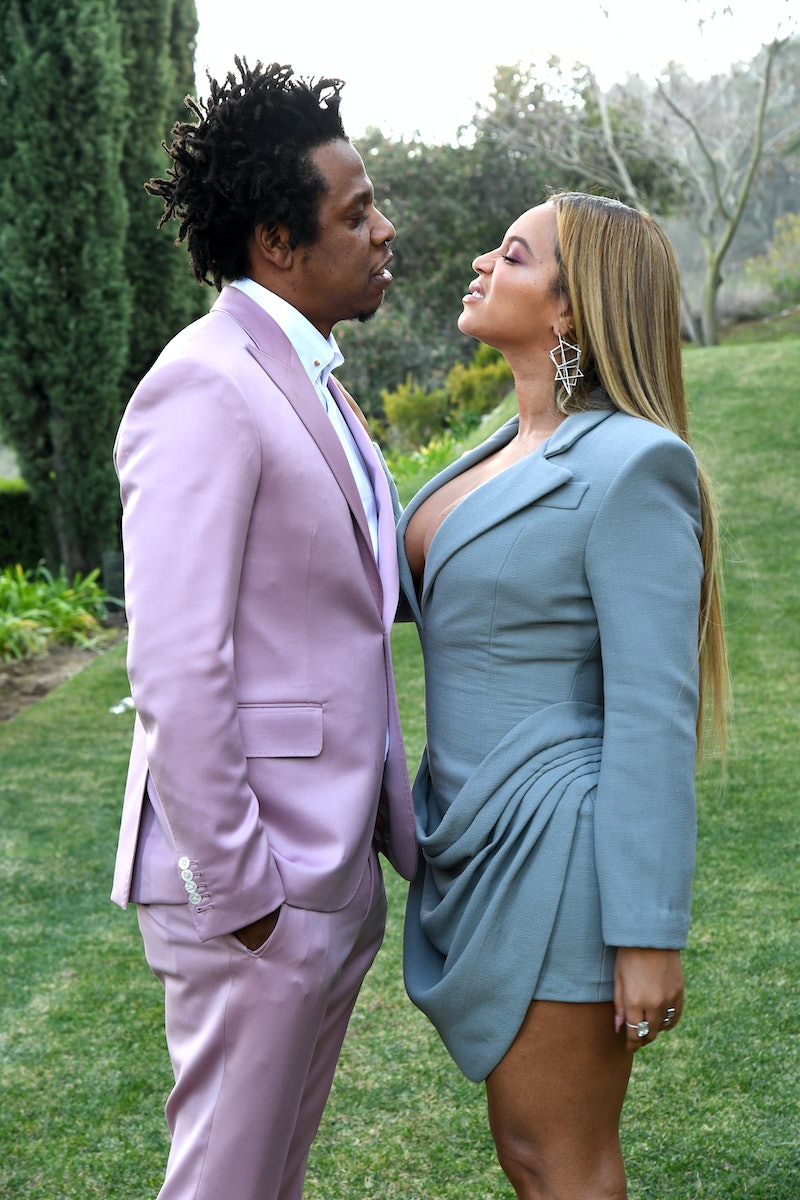 Nearly twenty years after the musicians first connected, Beyoncé & Jay-Z’s celebrated their 13th wedding anniversary in Las Vegas, with the “Black Parade” singer documenting their outfits and outings in an album titled “Sin City” on Beyoncé.com. The couple, who largely keep their personal lives private, shared a few snaps from the occasion. The pictures show Bey and Jay taking a private jet, eating at Cipriani, and showing off their coordinated looks.

Beyoncé also shared a few outfit pictures from the anniversary getaway on Instagram, giving fans a better look at her Alessandra Rich ensemble. The outfit included a tweed micro-suit, a bedazzled set of sunglasses and clutch purse, and vibrant red high heels with black ribbons. The Lemonade singer also posted a boomerang selfie with Jay-Z, with the stars cheesing it up for the camera.

Beyoncé and Jay-Z wed on April 4, 2008, in a secret ceremony in New York City. The two, who had been dating for six years, invited only a close circle of about 40 friends and family to their big day. “It was a very emotional wedding—lots of crying—and really very spiritual,” an anonymous source told People after the event. Bey and Jay made their first public appearance as a couple on the red carpet for the MTV Video Music Awards in 2004, according to Glamour. However, the two musicians may have been dating for longer, having collaborated on their Grammy-winning track “Crazy in Love” in 2003.

The couple appeared to have taken the trip solo, leaving their three kids Blue Ivy, Rumi, and Sir at home. The whole Knowles-Carter family does seem to be spending plenty of quality time together and sharing the memories with fans as of late. On March 31, the Ivy Park founder posted photos from a beach day with her kids, taking selfies in the sun, visiting the restaurant Nobu in Malibu, and standing by the ocean. Beyoncé and Jay-Z also posted photos of their Grammy Awards looks on Instagram on March 16, including a picture of Bey kissing the rapper on the cheek.

In March, Beyonce also dedicated her Grammy speech to her kids after winning Best R&B Performance as well as a Best Music Video for “Brown Skin Girl” along with daughter Blue Ivy. “I know my daughter is watching, two daughters and my son, you’re all watching,” she said in the speech. “Blue, congratulations. She won a Grammy tonight. I’m so proud of you, and I’m so honored to be your mommy, all of your mommies.”

More like this
Will Beyoncé Perform At Or Attend The 2023 Grammys?
By Jake Viswanath
Adam Levine & Behati Prinsloo Welcome Their Third Child Together
By Jake Viswanath
Meghan Trainor & Daryl Sabara Are Expecting Their Second Baby
By Jake Viswanath
Jay-Z Is Performing At The Grammys, Meaning Beyoncé Might Actually Show Up
By Jake Viswanath
Get Even More From Bustle — Sign Up For The Newsletter
From hair trends to relationship advice, our daily newsletter has everything you need to sound like a person who’s on TikTok, even if you aren’t.