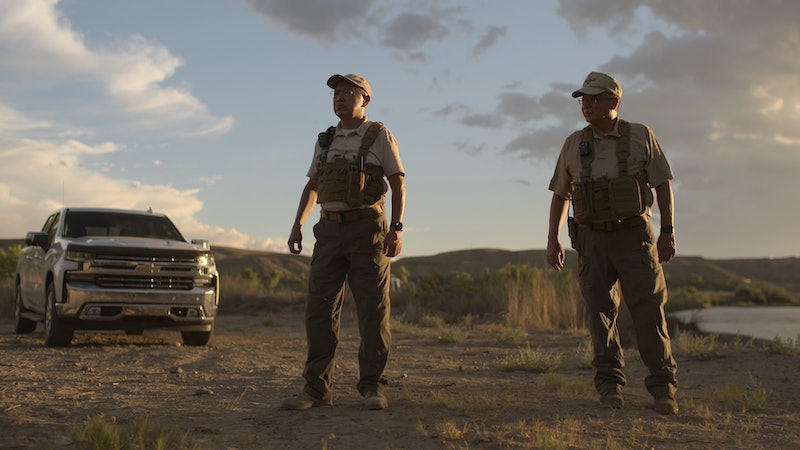 In 2000, two Navajo Nation Rangers were given a very special assignment: to investigate reports of paranormal activity on the reservation. The creation of the two-man task force stemmed from a complaint lodged against the department for failing to investigate a Bigfoot case. In the fifth episode of Netflix’s Unsolved Mysteries Volume 3, titled “Paranormal Rangers,” those now-retired officers — Stanley Milford, Jr. and Jonathan Redbird Dover — opened their case files to reveal some of the most out-of-this-world phenomena that they’ve personally experienced.

Bigfoot sightings haven’t exactly been a rarity on the 27,000 square miles of Navajo Nation land, which is located in northern New Mexico and occupies a space that is roughly the size of West Virginia. The Durango Herald, in 2013, referenced reports of “dark intruders on private property,” believed to be responsible for stealing or killing livestock and raiding gardens, among other misdeeds. What’s more, the reported sightings of what some residents believe to be a Bigfoot had been continuing to grow “more and more with each year,” according to the paper.

A year earlier, New Mexico’s Farmington Daily-Times also reported an increase in Bigfoot sightings, citing three reports from witnesses who either saw the creature itself or its footprints between January 2011 and January 2012. One man said he stumbled upon Bigfoot while herding his livestock in the Chuska Mountains. “My animals froze and I saw the thing walk over the hill,” he told the paper through a Navajo interpreter per Indianz.com. “It was taller than 8 or 9 feet, taller than the bushes, upright and hairy.”

That description certainly aligns with those presented in Unsolved Mysteries, which also draws a correlation between a simultaneous uptick in UFO sightings in the same area. According to Milford and Dover, the “hairy beast” is commonly described as being about seven or eight-feet tall, muscular, having canine teeth, and smelling like a wet dog. The Rangers also pointed to frequent reports of Bigfoot stepping over corrals and taking sheep, along with revealing incidents of sheep being killed by having the wool ripped right off their backs.

The Netflix series also features actual footage of the duo taking an eyewitness statement from one of an astounding 30 people who reported seeing a Bigfoot along the San Juan River. “Coming down that highway there, I thought a person was hitchhiking,” a woman explains to them in the clip. “But as I got a little bit closer, it wasn’t a person. It was a tall, tall body with... It seemed like, with hair all over because I didn’t see, like, facial features or anything.”

Another reservation resident and “Bigfoot witness” named Brenda Harris also shared some of her “encounters” with the creature. She recalled a summer night when something that was “black, tall, and . . . covered in hair” repeatedly tried to turn the doorknob of her mobile home and then darted off her porch to the west, something that continued throughout an entire night. The next morning Harris found what she described as a footprint measuring about 18 inches long and four inches wide.

The Durango Herald also interviewed Harris at 2013’s inaugural Northern New Mexico Bigfoot and Paranormal Conference where she was a speaker and shared her experiences with the 300 attendees. She explained that she teamed with other locals to form the Shadow Seekers, a group that investigates incidents in the area and tries to find evidence. Their focus is the public’s safety. “That’s why I am here,” Harris explained to the paper. “I don’t want to hear about anybody getting hurt.”