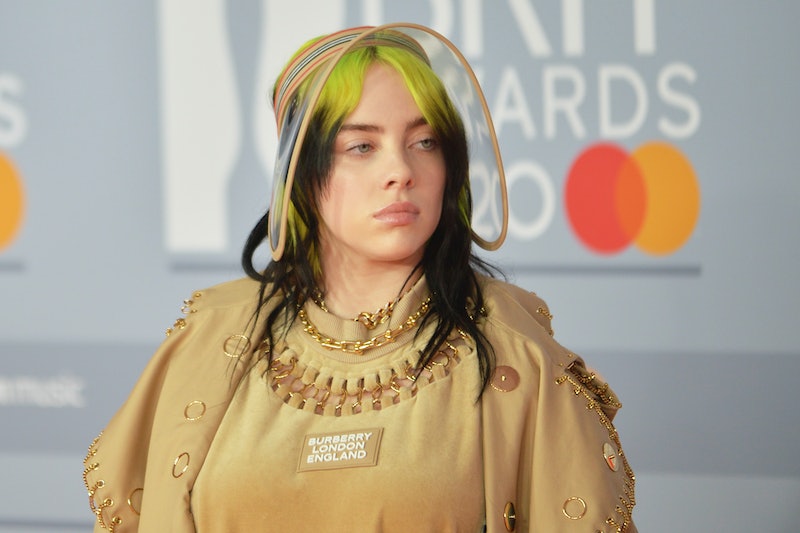 Few people have risen to superstardom as young as Billie Eilish, who was just 15 years old when her debut single "Ocean Eyes" went viral in 2016. Now, her extraordinary journey is being captured on film. On Sept. 28, 2020, Apple announced that Eilish's new documentary, Billie Eilish: The World's A Little Blurry, would premiere on their Apple TV+ streaming service in 2021. The company reportedly paid a hefty $26 million price tag for the documentary, and given how much fans are already anticipating the film, it seems like they'll easily get their money's worth.

While Eilish already has a close relationship with her fans through her music and social media, the upcoming documentary, directed by R.J. Cutler, promises an even deeper look at the superstar as she trots the globe while recording and promoting her debut album, pondering her rise to global stardom and her life as she now knows it. Expect revealing confessionals, brutal honesty, and for good measure, a dash of twisted humor. Here's everything you need to know about Eilish's next project.

What's The Billie Eilish Documentary About?

Apple TV+ describes the new documentary as Eilish's "coming-of-age story" as she adjusts to her newfound fame. According to the official synopsis, the film will follow Eilish over the past few years as she navigates life on the road as a teenage girl and records her Grammy-winning debut album, When We All Fall Asleep, Where Do We Go? It also promises to give fans a look at Eilish's life at home, with appearances from her collaborator and brother Finneas O'Connell, as well as their parents, Maggie Baird and Patrick O’Connell.

In an interview with Vanity Fair, Eilish revealed that the documentary will share aspects of her life that her fans have never seen before — including details of a past romantic relationship that she never intended on showing the world. "That was a huge part of my life," said Eilish. "And nobody knew it. It was this main thing that was taking control of my life."

Eilish also told the magazine that it was quite difficult for her to watch early versions of the documentary during the production process. "It's really about my life, me, in such a way that I was not expecting, and was pretty brutal to relive," said the singer, noting that she thinks it's "amazing" to be able to see her emotions from an outsider's perspective. "I was going through hell in certain parts of my life, and I had no idea anyone was seeing it."

When Was It Filmed?

Director R.J. Cutler told Vanity Fair that Billie Eilish: The World's A Little Blurry was filmed from 2018 to early 2021, during which "perhaps every second of her life has been recorded in some way or another" for footage.

The trailer for Billie Eilish: The World's A Little Blurry premiered on Tuesday, Dec. 12, proving that fans are going to get to know Eilish better than they ever have before. While the trailer leaves a lot to the imagination, it does detail some of Eilish's biggest personal and professional moments. From talking to the audience at one of her first shows to passing her driver's license test, fans will see it all. There's no big reveals yet, though — unless you count Eilish confessing that she occasionally sleeps in her parents' bed because she's scared of monsters. It's a bit ironic considering her music is pretty spooky, but hey, it happens.

When Is The Billie Eilish Documentary Release Date?

Billie Eilish: The World's A Little Blurry will drop on February 26, 2021. The film will be released by NEON in select theaters and be released simultaneously to stream on Apple TV+, for those who would prefer to rock their Blohsh merch at home.

How Can I Stream It?

If you have a subscription to Apple TV+, you can stream the documentary starting on Feb. 26. If you bought an Apple device within the past year, then you get Apple TV+ free for a whole year, meaning you can watch along with everyone else. However, if you still need to subscribe, Apple offers a free one-week trial before charging $4.99 a month.

More like this
Everything You Need To Know About ‘Black Panther: Wakanda Forever’
By Bustle Editors
Jason Derulo Is Launching A New Singing Show In The UK
By Maxine Harrison
Maxim Baldry Plays This Pivotal Role In 'The Lord Of The Rings' Universe
By Maxine Harrison
Lindsay Lohan & Jonathan Bennett Celebrated Mean Girls Day Very Differently
By Jake Viswanath
Get Even More From Bustle — Sign Up For The Newsletter