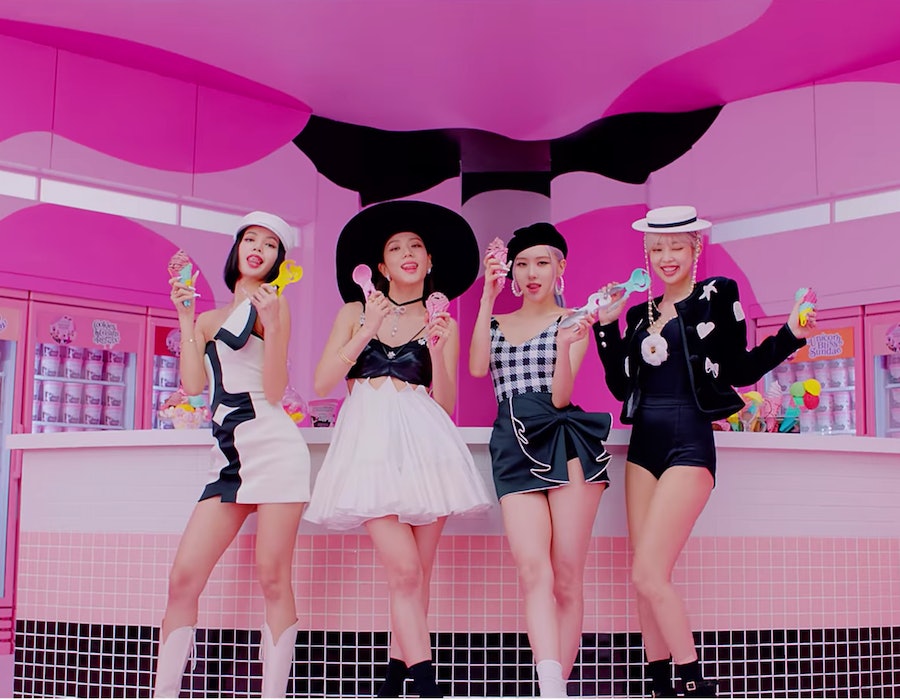 It may be almost Labor Day, but Selena Gomez and Blackpink have a new summery treat for everyone. On Friday, August 28, K-Pop superstars Blackpink and Selena Gomez released their long-awaited collaboration, "Ice Cream," and it didn't take long before fans started comparing the single to another sugary pop track: Ariana Grande's 2018 song, "Sweetener." But before stans start taking sides, there's actually a reason why these two tracks might sound similar.

While the songs don't seem all that comparable at first listen — "Ice Cream" is bright and poppy, while "Sweetener" has strong hip-hop and R&B influences — social media users pointed out that Jennie's second verse uses a lot of the same lyrical flourishes that Grande employs in her own song. "Get it, flip it, scoop it, do it like that, oh yeah, oh yeah / Like it, love it, lick it, do it like la-la-la, oh yeah," Jennie sings, which is reminiscent of the oft-memed "Sweetener" chorus: "And then you get it, get it, get it, get it / Hit it, hit it, hit it, hit it / Flip it, flip it, flip it / You make me say oh."

Fans aren't completely off with their assessment, as Grande is actually credited as one of the cowriters of "Ice Cream," alongside her frequent collaborators, Tommy Brown and Victoria Monet. (Gomez, Teddy Park and Bekuh BOOM are also credited as writers.) Brown first teased his involvement with the track back in August 2019, when he posed for a photo alongside Blackpink's Jennie, Rosé, Jisoo and Lisa in the recording studio. At the time, Grande commented a series of heart emojis, but she hasn't posted anything about "Ice Cream" since its release.

Grande may not have commented on her involvement in "Ice Cream," but Gomez has been incredibly effusive about the song and the chance to work with the K-pop stars — she even revealed on Aug. 26 that she and Blackpink had created their own flavor of ice cream in collaboration with Serendipity to celebrate the occasion.

"I'm so stoked. I've been a fan of you guys so this is a big, big dream for me," she told Blackpink in a teaser video posted ahead of the song's release. She echoed those sentiments during a recent interview with Apple Music's Zane Lowe on his New Music Daily show. "The girls are so cool and I love their music," she said. "They just have this thing about them, this [edge] that nobody else does."

Revealing that she was originally supposed to film the music video "in person" alongside the band before the coronavirus pandemic, Gomez added that she was still able to enjoy her time hanging out with Jennie, Rosé, Jisoo, and Lisa. "I had such a good time with them over FaceTime, when we could talk," she said. "It just felt so fun. ... I just hope that people feel good [when they hear it] and that they like the song."

The feeling of love is clearly mutual; in their own interview with Lowe, Blackpink explained that the collaboration with Gomez felt "natural" and that they were also big fans of her music before working with the singer. "We were very aware of her, we were big fans, and are under this same record label," the group expressed, according to Entertainment Tonight. "When this song came out on song cam, we had it for a while, and we had the idea to have Selena on it, because we obviously knew she would fit into it right away."