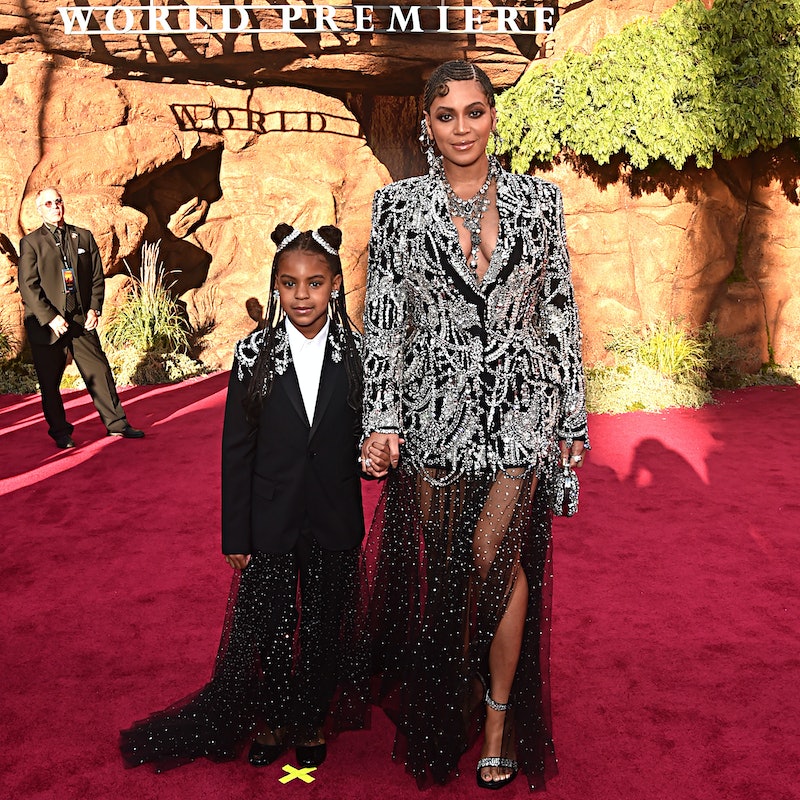 Is there anything the Knowles-Carter family can't do? Following Beyoncé's surprise British Vogue cover, fans of the legendary family were treated to news that Blue Ivy Carter will voice the Hair Love audiobook. On Monday, Nov. 9, filmmaker and children's book author Matthew A. Cherry posted about the exciting news on Twitter, revealing the 8-year-old icon added yet another accomplishment to her impressive résumé.

Hair Love, which began as a seven-minute animated film, follows a Black father who struggles but ultimately succeeds at doing his daughter's hair. Cherry, who co-created the film, described the story as giving "kids a character that normalizes and celebrates Black hair." In February, it won the Oscar for Best Animated Short Film. Now, Hair Love is a bestseller available in audiobook format, and fans couldn't be more thrilled about the story's narrator.

Twitter users were quick to point out the significance of Blue Ivy's participation in the project; she has been a victim of bullying from the press and people on social media her whole life. When Megan Thee Stallion posted a selfie with her on Twitter in January, several journalists mocked Blue's appearance. The journalists later apologized for their tweets after critics accused them of being anti-Black, but it showed how Black girls are subjected to Western beauty standards and ridiculed if they look different.

Twitter user DoreenGLM tweeted about Blue narrating the audiobook, writing, "Blue Ivy at such a young age, faced so many attacks and comments about her hair from adults who should have known better. Even television stations like BET joined in publicly on the mockery." She added, "To have her narrate a story on 'Hair Love' is just so fitting and perfect." Another fan tweeted about how personally moved they were by the news. "Blue Ivy Carter reading a book called 'Hair Love' after being bullied online for her natural hair is really just touching my heart," they wrote.

The praise continued to pour in. Self Care For Grief writer Nneka M. Okona tweeted, "This is so beautiful! Her tender little voice I cannot!!!!!" Another fan shared, "I can't wait for blue ivy to become a kid's voice actress or just an actress in general. why does her narrating the hair love audiobook have me tearing tf up." Libro.fm, a platform that hosts audiobooks, added, "Blue Ivy Carter, just 8 years old, is the narrator of Hair Love by @MatthewACherry! You love to see it, folks."

Impressive as it may be, this audiobook isn't Blue's first major project. She appeared on Beyoncé's visual album Lemonade, sang a rendition of "Lift Every Voice and Sing" in Netflix's Homecoming, and won a BET award for collaborating with her mom on "Brown Skin Girl." Narrating Hair Love is her latest achievement, but it certainly won't be her last.

More like this
Helena Bonham Carter Doesn't Think 'The Crown' “Should Carry On"
By Sam Ramsden
Paris Hilton Just Shared The First Photo Of Her Baby
By Sam Ramsden
Rita Ora Finally Opened Up About Marrying Taika Waititi & Their "Perfect" Wedding
By Sophie McEvoy and Catharina Cheung
Emily Atack’s Net Worth Would Make Charlotte Hinchcliffe Proud
By El Hunt
Get Even More From Bustle — Sign Up For The Newsletter
From hair trends to relationship advice, our daily newsletter has everything you need to sound like a person who’s on TikTok, even if you aren’t.