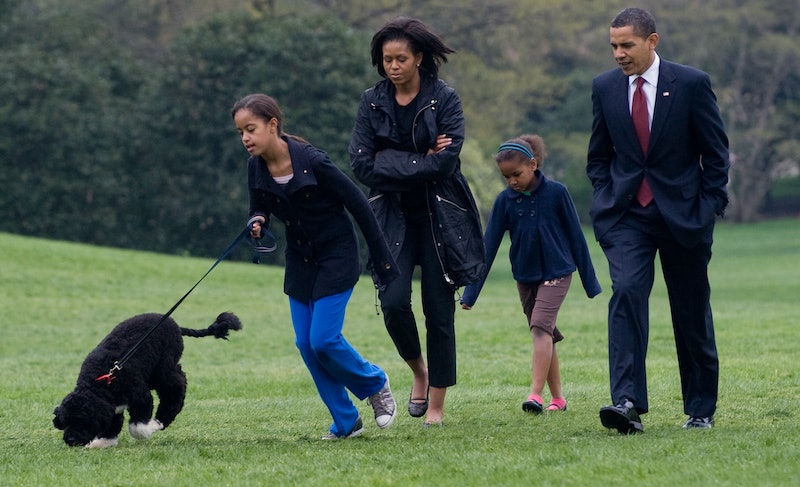 After saying a sad goodbye to one of their beloved dogs, the Obama family paid tribute to Bo via social media on Saturday, May 8. Both former President Barack and First Lady Michelle posted several photos on Instagram of special moments with their four-legged friend, captioning them with touching messages about how much he has meant to them and their daughters, Malia and Sasha. Bo, who had been a part of the family for a decade, died following a fight with cancer.

“This afternoon was a difficult one for our family,” Michelle’s statement, written on behalf of the entire family, read in part. “We said goodbye to our best friend—our dog, Bo—after a battle with cancer.”

The post revisited Bo’s history, starting from their time on the campaign trail in 2008 when they promised Malia and Sasha they’d get a puppy after the election. Although he was intended to be “a companion for the girls,” they “had no idea how much he would mean” to the entire family.

“For more than a decade, Bo was a constant, comforting presence in our lives,” the tribute continued. “He was there when the girls came home from school, greeting them with a wag. He was there when Barack and I needed a break, sauntering into one of our offices like he owned the place, a ball clamped firmly in his teeth. … And when our lives slowed down, he was there, too—helping us see the girls off to college and adjust to life as empty nesters.”

The post also went on to share the family’s gratitude that they were able to be with him more near the end, given that the pandemic brought “all his people … under one roof again.” Another point of appreciation was for all of the people who showed him love over the years. And they were indeed numerous; after the Obamas’ announcement, “RIP Bo” began trending on Twitter as animal lovers celebrated the life of the former first dog. Additionally, Barack and Michelle’s Instagram posts began quickly racking up likes, with each topping 1 million within mere hours of posting.

Barack’s post was shorter but no less sweet. It, too, highlighted what a wonderful companion Bo was to the family and how he saw them through highs and lows. “He tolerated all the fuss that came with being in the White House, had a big bark but no bite, loved to jump in the pool in the summer, was unflappable with children, lived for scraps around the dinner table, and had great hair,” the former president wrote in part. “He was exactly what we needed and more than we ever expected. We will miss him dearly.”

With the Obamas mourning their loss, they’re encouraging others to “please hug the furry members of your family a little closer tonight—and give them a belly rub” on their behalf.