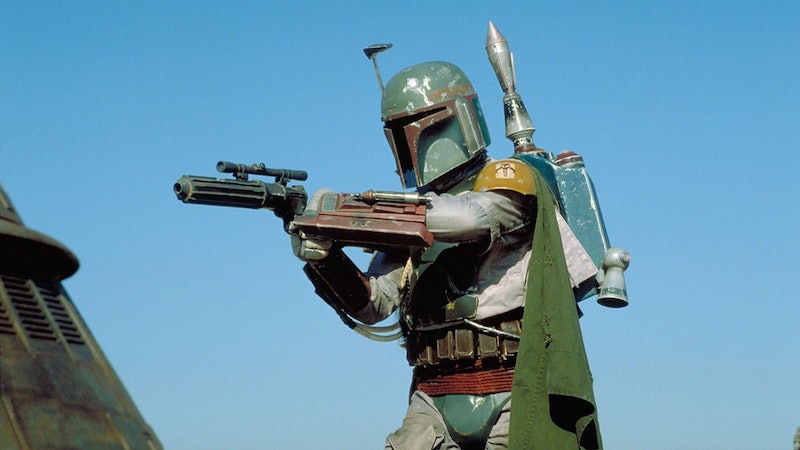 The return of Baby Yoda isn't the only thing Star Wars fans have to look forward to in the much-anticipated second season of The Mandalorian. Rumor is that bounty hunter Boba Fett will be making an appearance too. Sources told The Hollywood Reporter in May that Temuera Morrison, known for his portrayal of Jango Fett in Attack of the Clones, will appear in the Disney+ series as his clone son, Boba Fett. Disney hasn't confirmed the news, but Lucasfilm has apparently filed a new trademark for the 'Boba Fett' name, which feels like suspicious timing. In addition, Morrison's agency slipped up and updated his CV to say that he would be portraying Boba Fett in Season 2 of the show.

Boba Fett made his first appearance in the Star Wars universe in The Empire Strikes Back as one of the bounty hunters hired by Darth Vader to track down Han Solo and the crew of the Millennium Falcon. After delivering the Falcon crew to Vader, Fett took Han Solo to crime lord Jabba the Hutt to collect the bounty on his head. Boba Fett last appeared in the Star Wars franchise at the beginning of Return of the Jedi, when he appeared to have met his demise after falling into the pit of a sarlacc during Jabba the Hutt's failed attempt to execute Han, Luke Skywalker, and Chewbacca.

In the prequel Attack of the Clones, it was revealed that Boba Fett is actually one of the many clones of Jango Fett. He was given to Jango to raise as a son as payment for Jango agreeing to be the genetic template for the clone army. Though Boba Fett wears Mandalorian armor, similar to the main character of the Disney+ series, it was inherited from his father Jango Fett and it is believed that neither of the men were actually Mandalorians.

A younger Boba Fett was portrayed by actor Daniel Logan in the Star Wars prequels, but many have speculated that Temuera Morrison would one day return to play an older version of the character. Some fans believe that Boba Fett already made a brief cameo in Season 1 of The Mandalorian during the episode "Chapter Five: The Gunslinger," speculating that he could have been the mysterious figure spotted standing over mercenary Fennec Shand after she was shot and left for dead. In fact, if you listen closely you can hear the sound of spurs rattling as the caped figure walks — a signature trait of Boba Fett's.

Making things even more mysterious, actor Timothy Olyphant is rumored to be playing sheriff Cobb Vanth in The Mandalorian Season 2 and will be wearing Boba Fett's Mandalorian armor for at least some scenes, according to Slash Film.

Unsurprisingly, Disney has remained tight-lipped about the potential return of Boba Fett. He's not even included in the Season 2 trailer, so it's still possible that Morrison will return to the Star Wars universe as another character — or as multiple characters. As we already know, Boba Fett isn't the only clone with Jango's face.