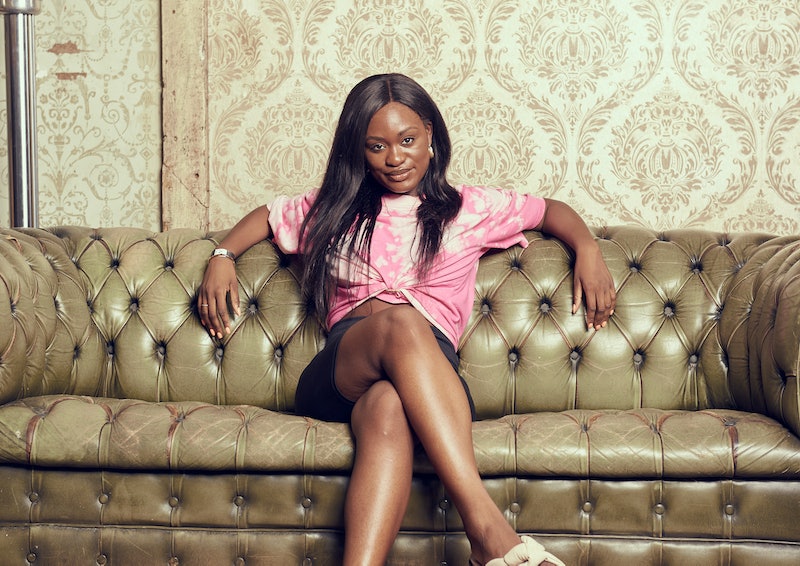 Bolu Babalola doesn’t know how to write anything without an element of comedy. “Humour is magical to me,” the bestselling Love In Colour author tells me over Zoom. “It’s such a balm and, in everything I write, I hope to use it as much as possible.”

It’s why the writer’s first TV pilot, Big Age, was “always” going to be told from the perspective of twenty-something Black Brits whose experiences were just as “hilarious” as her own.

Coming to Channel 4 on September 10, Big Age is a coming-of-age story about four young Black British friends who are in the ‘big age’ era of their lives — an era of “personal dreams, parental expectations, and the crushing reality of maxed-out credit cards,” as Channel 4 puts it. It takes its name from a Nigerian phrase that parents will often say to their children – “at your big age!” – which implies big decisions need to be made, including choosing the “right” kind of career.

It sounds refreshingly relatable, which is exactly what Babalola was hoping for. The British-Nigerian writer (who gained a law degree before deciding to follow her childhood dreams of becoming an author) says she wanted the pilot to be about “us” — fellow young Black British girls who are still “figuring things out.”

“As a Black Brit, I always knew I was going to write about Black Brits. That’s always been the dream.”

“I’m quite narcissistic,” Babalola laughs. “As a Black Brit, I always knew I was going to write about Black Brits. That’s always been the dream. I always wanted to tell our stories and the stories about my life because that’s what I know.”

Big Age’s protagonist Ṣadé (played by Ronkẹ Adékoluẹjo) is a 25-year-old aspiring writer who is loosely based on Babalola herself (more on that later). At its heart, the series is a rom-com (unsurprising, since the writer is a self-coined “romconnoiseur”) that intentionally places a dark-skinned young woman at the centre of a will-they-won’t-they love triangle. Babalola says she wanted to create an imperfect love story as it’s important to show a Black woman “in all her messiness.”

However, despite romance being the key theme, Babalola made sure the show’s central friendship was the “real love story” of Big Age. Ṣadé’s free-spirited best friend Dela is often the architect of wild nights out (travelled to by bus, wearing expensive outfits with the tags still on). The two have a unique bond that’s beautiful to watch.

L’Oréal Blackett: You explore parental pressures in Big Age, looking at how parents wish their kids would become doctors or lawyers and would get their lives 'together' in some way. Do you relate to this?

Bolu Babalola: I’m British Nigerian but my parents have always been fully supportive of me being a writer. So when I told them that I wanted to figure out this writing thing, their response was like “you’ve always written.” But I understood that wasn’t a universal experience. I wanted to [portray] it in a way where I didn’t villainise the parents. Ṣadé’s mum is full of love and it’s not coming from a malicious place, it’s just because her concept of success is just different from Ṣadé’s and a new generation.

“Ṣadé is based very loosely on me. I wanted to explore the fact that many Black women — women in general — can be insecure, have these nuances where we’re figuring it out but also have this knowledge that ‘I’m the sh*t.’”

LB: You say you write stories of dynamic women — tell me about Big Age’s Ṣadé?

BB: Ṣadé is based very loosely on me. I wanted to explore the fact that many Black women — women in general — can be insecure, have these nuances where we’re figuring it out but also have this knowledge that “I’m the sh*t.” Because Ṣadé knows that she can write, she’s very confident and knows that she’s a baddie. But naturally, she has these elements of insecurity and lower moments and that is completely normal. So often in the name of empowering ourselves, we ignore the fact sometimes we don’t feel so great. We can be messy Black women too and still be confident. It was really important to show multiple layers and multiple truths.

LB: Can we talk about Beverley Knight’s cameo — how did she come to be part of the show?

BB: When Beverley Knight said she read the script and wanted to be in it, I was like “woooooah.” She came on set glorious, smelling like heaven, looking like heaven, looking like good decisions and love. Her energy was so beautiful. And also because it’s a show that celebrates Black Britishness and Ṣadé is a darker-skinned Black woman and to have such an iconic Black British darker-skinned woman who is real-life iconic was just so emotional for me.

LB: There appears to be a host of Black British dramas on TV at the moment, with some comedies and reality shows in the mix too. Why are these important stories to tell?

BB: It’s important to see us in our many forms, in our many nuances because our stories are what define us as humanity — all of our stories. To be able to have agency over that, it’s reiterating our humanity, even though we shouldn’t need to say that. And also, we deserve to see entertainment with ourselves. That should be a very normal thing, that should be the default.

LB: You obviously write a lot about love, but friendship as well as romantic love is the theme here. How important a role do friendships play in your life?

BB: My friends are the loves of my life completely. The [Big Age characters] are like an amalgamation of so many of my best friends and our bond. Big Age is a romcom and of course, will have romcom elements — we’ll see beginnings of a love triangle form already — but the reason the pilot is so focused on Dela and Ṣadé is because I wanted people to know that they’re the core love, they’re the core romance.

“My friends are the loves of my life completely. The [Big Age characters] are like an amalgamation of so many of my best friends and our bond.”

LB: Twitter is another outlet of yours — what's your relationship with it after your viral moments like your Michael B. Jordan moment?