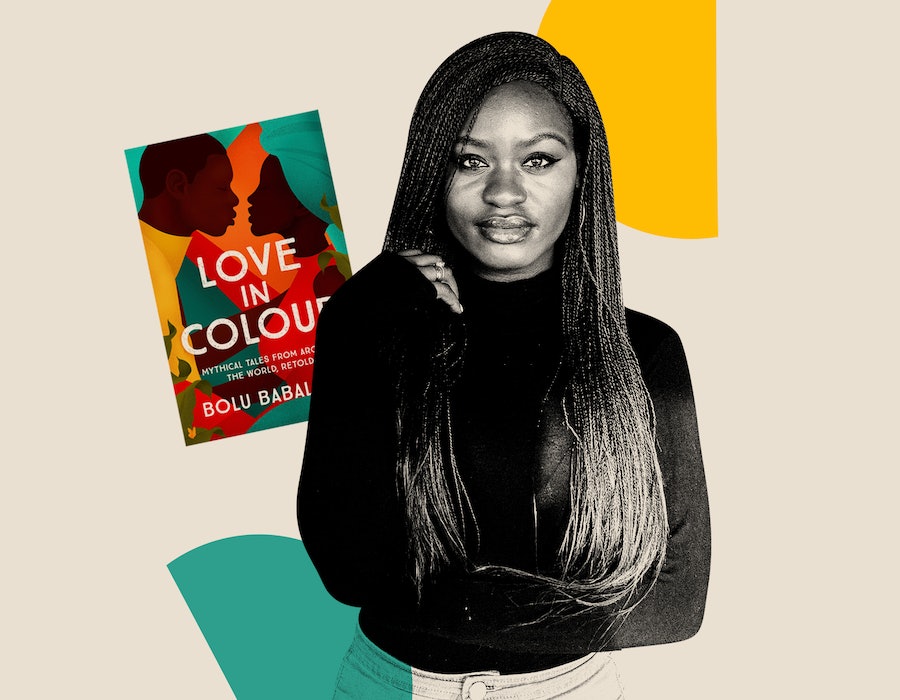 Bolu Babalola is the expert on pop cultural representations of love Twitter needs but does not deserve. From the boyfriends of Meg Cabot’s beloved Princess Diaries novels and Nick and Jess’s relationship on New Girl to the couplings up and muggings off we see on Love Island, Babalola knows her romance (or in the case of the latter — lack of it.) So much so she’s dubbed herself a romcomoisseur. So much so she engineered a real-life meet-cute with actor Michael B. Jordan that will go down in Twitter lore.

But that’s just Twitter, and Babalola is achieving as much off the platform as a writer as she is on it. Her recent Paper magazine cover interview with Michaela Coel is proof of that. Her first book is too. It sees her reimagine love stories of legend and it’s not just the subject matter that’s epic, but Babalola's scope. In Love In Colour, she takes West African folklore, Greek mythology, and South Asian tales in her stride, giving age-old themes deliciously modern twists.

She writes of the book: "Time was constructed with love in mind. Time and love are intertwined, they are both measures of life, two clocks. And, for love to operate as it should, it is imperative that the timing should be right. Just as it is in these stories."

It's not just the book's breadth or the deftness with which it’s handled that will have you hooked, but the delightful dichotomy that Babalola’s writing deals in. She describes this contrast as “sweet yet savage” or, per her Amazon biography, the ability of a woman to be both “beauty and beast." Whatever you call it, prepare to be swept up in the vibrancy of those who feel deeply, yet do so with the kind of humour that will make you want them as your mate.

In this excerpt from the Love In Colour story Psyche, we meet Psy, who has finally gathered the courage to ask for a promotion from the sort of manager that will be all-too familiar to anyone who has ever tried to have a career in media or TV. Except it’s not off to the best start. In swoops Eros to save the day, or maybe just complicate matters even more.

Love in Colour: Mythical Tales from Around the World, retold by Bolu Babalola (£16.99, Headline) comes out on 20th August and is available for pre-order.

Excerpt from Love In Colour, exclusive to Bustle UK

This couldn’t be happening. Psy watched as the non-fat soy latte seeped and spread into the white of her top, which in turn stuck to her skin. She stared down at it as if she could make the stain disappear through mere willpower. Somehow, she had already ruined her Promotion Outfit. After two years of coffee runs, late-night calls about fixing copy, and inserting anti-anxiety suppositories into the anus of a grouchy Pomeranian, Psy had decided that today was the day she was going to ask Venus Lucius – her boss, (tor)mentor and Olympus Magazine’s fashion editor – if she could be promoted from her assistant to an editor in her own right.

While it was true that for two years she’d told everyone her job title was ‘editor’ anyway, she figured she was finally ready for this not to be a lie concocted to impress aunties, old high-school frenemies and men from dating apps with MFAs. She’d dressed for this occasion, hoping her outfit screamed ‘ready to not pick up your dog shit, Venus – seriously, stop feeding her caviar’. Her sleeveless white mock-turtleneck top was meant to show she was a sophisticated, empowered woman unafraid to embrace her femininity, but, with the coffee stain, it now screamed: idiot who can’t be trusted to not spill hot beverages, never mind be trusted to not spill crucial industry tea.

‘Shit!’ She grabbed a handful of napkins from her tan leather tote, a result of late nights at the office and fast food, and dabbed with frantic futility. She knew the stain wouldn’t go away, but maybe she could reduce the stench of inner-city coffee shop on her skin. Alongside missing her morning coffee, Venus hated misattributed scents – lipglosses that smelled like strawberry, candles that were meant to smell like ‘Christmas’, and as such she would inevitably abhor assistants who smelled like non-fat soy lattes.

Once, Psy had made the mistake of switching up her daily perfume and Venus had called her into her office and asked why she was ‘disrupting her olfactory peace’ with a foreign scent when she had just got used to Psy’s ‘70%-off suburban department store effluvium’. It had been a long couple of years. When Psy had passed her probationary period, which had involved trials such as sorting a heap of mysteriously label-less clothes by designer (and then by season, and then by year), she’d though that things were bound to improve. However, just like when she thought Venus wouldn’t mind a spinach salad when they ran out of kale at the deli, Psy had been very wrong. It seemed that the more capable Psy proved herself to be, the more Venus sought to test her. If Psy was forever three steps ahead, Venus ensured she elongated the path to success.

So, this time, Psy had decided to take the leap and create her own path, pitch an actual idea rather than trying to hitch on to an existing one, and she had a feeling Venus might be more inclined to hear her out if she didn’t really have another choice. She was scrubbing aggressively at the stain when Eros’s low, smooth voice swooped into her earshot with ‘What a statement. Is it a transformation of nude? A splash of brown against a white backdrop. Poetry. Subversive.’

Psy looked up to meet the gaze of the owner of the buoyant voice. Irritatingly, even at 8:45 in the morning and under the ugly fluorescent lights of the corporate lobby, the guy was still pleasing to look at it. His dark curls were immaculately dishevelled and moisturised, his bronze skin looked like he’d just come back from Mykonos, and he was dressed with urbane casualness, in a khaki shirt layered over a thin white tee that grazed the contours of his torso. There wasn’t a coffee stain in sight.

‘Thanks, and so are you. Actually, you remind me of coffee. Hot, dark, sweet, gets my heart racing—’

Psy groaned, rolled her eyes and laughed despite herself. This was their friendship: Eros flirting with Psy as some kind of exercise in rakish coquetry, because there was no danger of her thinking it was real, and Psy acting as if Eros was a creature to observe on some kind of playboy safari, taking notes, learning what to do when she encountered them in the wilderness.

"Stop. Do girls usually fall for this? Really?"

He twitched his shoulder.

"I mean...yeah. They find it charming and disarming and then it usually leads to me asking if I can replace their coffee, which they graciously accept..."

When she looked unimpressed, he changed tack.

"That was the plan,’ Psy huffed, before gesturing to Eros’s outfit as an idea struck her."

"And this is what we’re gonna do to make sure that’s still the case. You’re gonna give me your khaki shirt for an emergency fit. I’m gonna change in the downstairs lobby toilet. I can’t take the risk of going upstairs and having Venus see me like this. She’s ended careers for less. Remember when that intern came in in jeggings?"

Eros was already shrugging off his shirt and exposing arms that were almost too obscene to look at at this hour of the morning.

"She is...difficult, yes. It’s just a case of managing her."

Psy forced her eyes away from his arms, grabbed his shirt from him and quickly made her way to the toilet in the corner of the lobby, with Eros following suit.

"Maybe it’s easier for you to manage her because she’s your sister... But you know what? Maybe you’re right. It’s all about a positive attitude. Maybe if I dig deep enough, I’ll find that there’s something fulfilling about living my life in total servitude to a woman who once said I had a ‘hardworking nose’? What does that even mean, E?"

Psy was in and out the toilet in a matter of minutes. When she emerged, her coffee-stained top was squished into her tote and Eros’s shirt had been transformed into a cute tie-waist number with a few buttons tastefully undone. Their conversation continued without pause, although Eros took a moment to silently decide that he would never ask for that shirt back, despite it being a favourite, that Psy should keep that shirt for ever, and that it looked better on her than it would ever look on him or on anybody else. He cleared his throat.

"Well, I think you have a very cute nose."