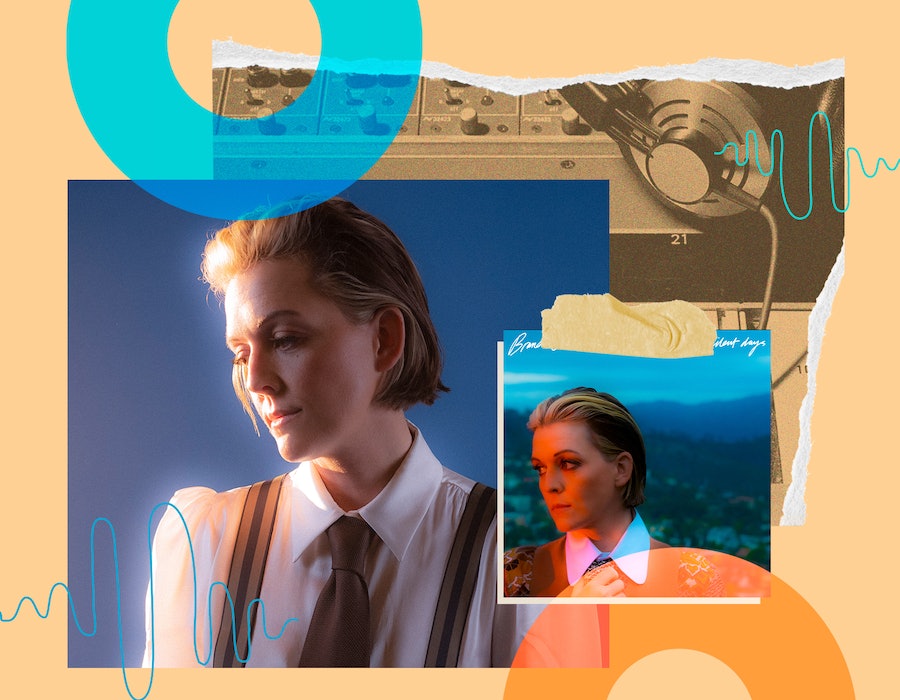 When Brandi Carlile started writing her new album, In These Silent Days, she had one goal: to be as dramatic as possible. The self-professed “lesbian chicken farmer mom” isn’t generally the overly theatrical type — she’s more likely to spend her days fishing than stirring up conflict. “I’m from the Northwest, right on the Canadian border, so for me drama is just... any feelings at all,” Carlile tells Bustle. “But I have [feelings]. I don’t have any other way to express them. I don’t know any other way to express them [other than music].”

Even this new, heady music was written in the quiet serenity of Carlile’s barn, alongside her longtime collaborators Tim and Phil Hanseroth. (It isn’t hard to get together: The twin brothers and their families reside on Carlile’s 90-acre Washington compound, where the singer and her wife are raising their two daughters.) Carlile had just finished working on her memoir, Broken Horses, and though revisiting young Brandi wasn’t easy, she found that it laid the groundwork for In These Silent Days. “I had just mined my soul so thoroughly that I knew what the songs were about in real time while I was writing them,” Carlile says. “It gave me such a language.”

Music has always been Carlile’s outlet. Growing up without a lot of money, she taught herself piano and guitar, and cut her teeth onstage as a backup singer for an Elvis impersonator. After dropping out of high school, she frequented open mics around the Seattle area, quickly joining forces with the Hanseroths. While the rest of the world fawned over Nirvana, Carlile and her crew were honing their three-part harmonies, perfecting their brand of country-folk.

One thing the six-time Grammy-winning singer does share with her grunge rock peers? She’s always been one of those “but just wait until you see them live” artists. In part, it’s Carlile’s extraordinary vocal range and her hair-flying-everywhere guitar-slamming that win the crowd over. But the real magic is in the human errors: the slip-ups, like the famous vocal crack in her 2007 breakout hit “The Story”; the full-bellied roars; the huge gulp of breath she swallows before a high note. With In These Silent Days, she wanted to bring all the liveliness of her stage presence to a record, imperfections and all. The album is filled with sweeping instrumental compositions and emotional crescendos that feel like they’re building on what songs like “The Story” and “The Joke” — the Grammy-winning track that earned Carlile a standing ovation at the 2019 ceremony — had started. It’s Brandi Carlile’s signature, genre-bending sound, just turned all the way up.

Below Carlile opens up about her chosen family, gardening through lockdown, and the song she’s most proud of.

On Writing Her Memoir & Giving Up On Perfection

What was going on in your life when you started working on your new album?

I just put out my book [Broken Horses] and I got all sorts of really beautiful feedback. I don't want anybody to think I have everything figured out, but I had figured some things out because I had chronologically mined my soul, my life in writing the memoir. It all sounds very self-indulgent, but it’s something I recommend everybody do at some point in their life: really go back and try to remember your first memory in a visceral way. Try to smell the smells in that space, see the things, feel the feelings, and the [memories] around it will start becoming clear.

So when I finished the book, I had all these experiences to pull from for the songwriting on the album, which is sort of the opposite of the way I [usually] do it. It felt natural for me to go from being a literal literary writer to go back to music, and I think it’s because I lack the fundamentals of an education in such a way that I’m just open-flowing when it comes to writing. I used to go to my piano or my guitar and write a song when something was befalling me, and it would take me a couple months to really realize what I had written the song about.

I keep seeing the word “drama” used to describe what you were going for with this album. What does drama mean to you?

When I was a little kid, I used to fight all the time with other kids. I didn't have my sh*t together mentally or emotionally, and when I learned to play an instrument and I got on stage, I stopped wanting to fight and yell and scream and throw my fists around. But in the studio I have always kept pretty solid control, I don't know why that is. I get very workman-like in the studio. I get really perfection-based even though I kept live takes, I kept vocal mistakes ... I died inside every time I made one. I don't know if it’s because I started working with such iconic producers so young, that I felt really fight-or-flight about it and it just shut me down.

When I went into the studio to make [my last album] By The Way, I Forgive You with [producers] David Cobb and Shooter Jennings, they just made me feel so comfortable being the person I was onstage in the studio. I slowly kind of adapted to it and accepted it, and at the end of the record-making process we wrote and recorded “The Joke,” which was peak drama for me. I’ll never forget that last note — they were like, “Just go AHHHH,” and I was like “No, I’m not Celine Dion, it is so stupid. I’m not going to do that big dramatic note!” and they were like, “What’s your problem with drama?” and I was like, “I don't know.” I just did it. I remember packing up and leaving the studio and thinking, God, there is more of that in me. I wish that this was just beginning and not just ending. So I wanted to start there, at that level of drama and take it forward.

Since you made this album at home, was it also inspired by your surroundings and pace of life?

It obviously did affect [the album] pretty drastically ... you get in this cycle when you are in the music business, literal cycles. You make an album and you tour the album, and the next year you go to the tertiary cities and you tour that album again, and the next year you start integrating some back catalogue, maybe bring a new person into the band so you’re changing it up and things are feeling lively for everyone. It’s not monotonous by any means. I have nothing but gratitude for my job, but it can get a bit systematic, and I guess you always wonder — what happens if it all goes away? What happens if I break my back or get cancer or I have a vocal hemorrhage and it just stops and there is nothing I can do to sustain myself?

And then it happened. It actually happened. [The pandemic] happened. It stopped, and there wasn't a safety net. There wasn't a backup plan. When you start playing music as a kid, you are told, “Well, you better have a backup plan.” You know? It’s one of very few jobs where that is the kind of systemic American response to it, and of course we don't have backup plans, and it all went away.

I was entrenched in my home and in nature and in my family — and, by family, I mean me and the twins. The responsibility of providing for my family had all gone away, and you know what? We adapted and we totally got through it. We spent time in nature and we spent time together and we did grow food and we did write songs, and it was incredibly life-affirming to realize that if the unthinkable happened, if it all went away, we’d still be okay and we’d still be artists.

That really comes through. Is there a song that you feel especially proud of?

“You And Me On The Rocks” is this snapshot of gratitude that I feel for the time I had with my family. I feel like it’s a foundation now that we are built on, that nothing that happens in the future will change that. I remember because I had just written a book and gone back to my Sunday school days. There is this Sunday school lesson about building your house on a rock, and there was a little song to accompany it and picture to color in. I always had in the back of my mind that I wanted to build my love and my life and my family on something really solid. When my job went away, which I felt at the time was my identity, I realized that I had built my house on a rock that was solid enough to sustain even a really hard time.

How did you spend your days?

I kept us really busy on the property. We built a garden, a stacked-stone raised-bed garden. We built a fence and a deck, like a 2,000-square-foot deck with an in-ground Costco-style pool in it for all the kids to swim in. We built trails in the woods. I wrote the book, we wrote songs, and we bought cameras and we learned how to livestream ourselves. I also got my captain’s license and learned how to drive a big boat out in the ocean.

On Dancing At Her Wedding & Busking On The Street

What song played at your wedding to the lovely Catherine Shepherd?

The twins sang “Beginning to Feel the Years” with a ukulele. It’s one of our songs, but it's significant because every union in this family that we have just kind of perpetuates the story of all of us. Our wives and our best friends and our children and the fact that we have chosen to literally live together and do life together and share all of our things and everything that comes our way in terms of good fortune. The wedding was really beautiful, but it was just an extension of that. It was all of us just acknowledging the fact that we make the decision to wake up together every day.

What was the first record you ever bought?

It would definitely be Blue Moves by Elton John, from a secondhand store bin. I didn't have a record player, so I just cut up the album artwork and hung it up all over my walls.

What was it about Elton John that drew you in?

I completely fell in love with Elton John. He was a departure for me from the things about my life that I wasn’t going to be able to take into adolescence and adulthood. I grew up listening to country and Western music and in a really heteronormative conservative environment, and I saw Elton John as a doorway, and I took it.

Hell yeah. I have three: “Fancy,” the Reba McEntire version, “Don't Let the Sun Go Down on Me” by Elton John and George Michael, and “The Show Must Go On” by Queen. I love karaoke. Anyone can do it, and everybody wants to shine at some point in their lives.

Was there a moment when you felt like you had made it as a musician?

Every moment along the way. Every karaoke contest, every guitar chord I ever learned, every time I was busking and I would open my eyes again and there would be five people standing in front of me. Every time I achieved a little micro victory, I thought I had the greatest life in the world.