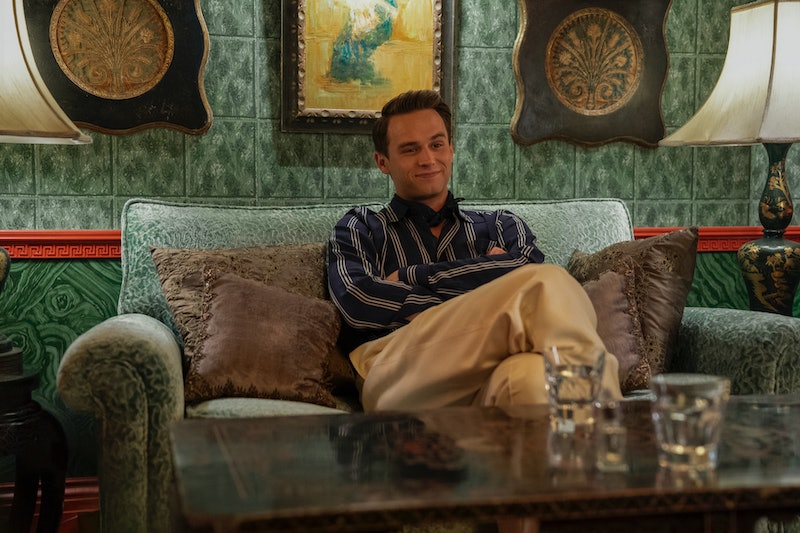 Spoilers ahead for Ratched Season 1. Prepare to see a much different version of Brandon Flynn in Netflix's Ratched. The actor, best known for playing Justin Foley in 13 Reasons Why, appears in the One Flew Over the Cuckoo's Nest prequel as a wealthy boy named Henry Osgood. Whereas Justin is an empathetic character who grew up under hard circumstances and slowly grows into a better person, Henry is pretty hate-able. He's privileged and spoiled, with a mother who dotes on his every need. He also has an odd, sadistic urge to prick everyone with needles.

This is what leads his mother Lenore (Sharon Stone) to hire Dr. Hanover (Jon Jon Briones), a psychiatrist on the cutting edge of some very questionable medical techniques. In order to treat Henry, he gives him LSD. But while Hanover isn't looking, Henry dumps the full vial of drugs into Hanover's drink. Henry, also under the influence of drugs, then chops off both the gardener's and his own arms and asks Hanover to swap them. Hanover obliges, but the "surgery" is unsuccessful, and Henry's arms and legs all need to be amputated due to a sepsis infection. The ordeal does nothing to lessen Henry's entitlement. If anything, being waited on constantly by his mother makes him even worse.

He continues to torment everyone around him, and eventually tricks one of his servants into killing his mother and taking the full blame. Not that he has much option: the show is set in the '40s, and no one will believe a servant's word over a rich kid's.

But Henry gets his, in the end, when he learns that his mother has left half of her fortune to an art foundation and the other half to her pet monkey. Henry is left with nothing, and his mom's will stipulates that he be institutionalized. Due to its close proximity, Henry will likely end up at Lucia State Hospital, the mental institution Dr. Hanover used to run. This would put Henry in direct contact with people like Nurse Betsy Bucket (Judy Davis), who absolutely won't tolerate his bad behavior. He ruined the best thing he had by killing his mom, and now he's going to pay for it.