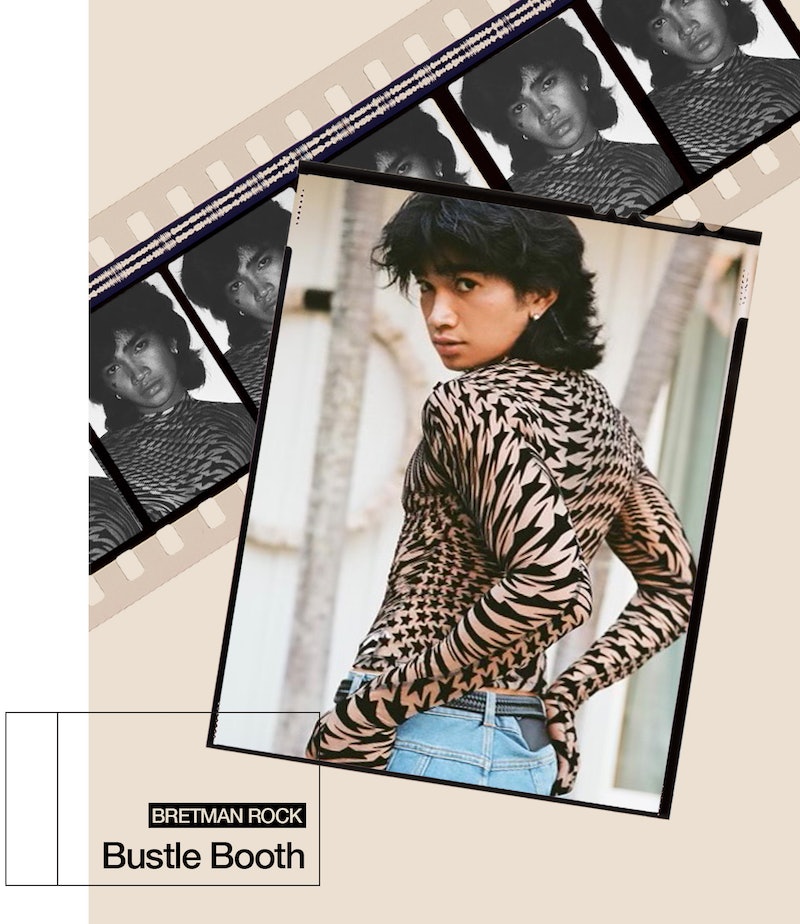 Every day, Bretman Rock wakes up at 5:30am to do light meditation. It’s something that his Grandma, who was a shaman, taught him — that the first few rays of sun in the morning are the purest form of light, and it’s the most energy you will get.

Yet the energy of Los Angeles — natural home for actors, influencers, and internet icons like Rock — never felt right to him. He prefers Hawaii, though growing up on the island, he couldn’t wait to get out. “What we see in the media growing up in Hawaii is like, everything is in LA. Jobs are in LA, all the money is in LA, your dreams are in LA,” says Rock, who is Filipino-American and moved to Hawaii from the Philippines when he was seven. Though he likes to visit LA for inspiration and for work, he’d rather spend his time in Hawaii gardening and enjoying nature (though he’s not shy about broadcasting it all to his nearly 18 million followers on Instagram). “I thrive when I’m by myself.”

It’s something the 23-year-old social media personality’s millions of followers know firsthand, as Rock has steadily gained a following over the past 7 years across Instagram, YouTube, and TikTok for his humorous beauty tutorials and videos documenting his life. His undeniable star quality is as real as his name, which, yes, is actually Bretman Rock. (He’s named after two wrestlers, Bret the Hitman Hart and The Rock). “I really wish I was making this up, because every time I tell people this they’re like, ‘You’re not real,’” he says.

His online success was real enough to net him his own show on MTV’s YouTube channel, Following: Bretman Rock. More opportunities, like becoming Playboy’s first openly gay male cover star and a skincare collaboration with Curology, followed. He credits manifesting with helping him achieve his goals. “There is not anything in my possession, any successes that I have, [that wasn’t] an imagination at first.”

Yet there’s one accomplishment he’d like to credit someone else with inspiring. “If I had to thank one person for the body I have today or my athleticism, it would be Michelle Obama," Rock says of the former First Lady, who launched the Let's Move campaign in 2011 to combat childhood obesity with school activities. "I used to hate doing sports until Michelle Obama stepped into the White House. Michelle, if you are ever to read this piece, just know I'm hot because of you."

Get to know more about Bretman Rock in his Bustle Booth questionnaire below.

I’m a big blown Leo. You can tell by this mane.

“That’s so fetch.” We will quote [Mean Girls] until we die, b*tch. And “The limit does not exist.”

Kim Possible. She was my girl crush.

The Challenge on MTV. They always get cute boys that are my type. I still watch for the challenge, but the boys help.

Big Brother. America would fall in love with me.

There was a video on TikTok that said “Do you know why Lamborghinis don’t make commercials? It’s because their target audience is not at home watching commercials.” Before, I was questioning myself being like “Why am I single?” but it’s because my husband is not at home DMing me. He’s out there driving his little NASCAR or building a house.

More like this
'Wakanda Forever' Is Already Opening Doors For Mabel Cadena
By Grace Wehniainen
Michelle Obama Opened Up About The "Discord And Discomfort" Of Marriage
By Stephanie Topacio Long
In 'The White Lotus,' Leo Woodall Gets His Moment
By Gabrielle Bondi
Marcus Mumford, Open Book
By Ilana Kaplan
Get Even More From Bustle — Sign Up For The Newsletter