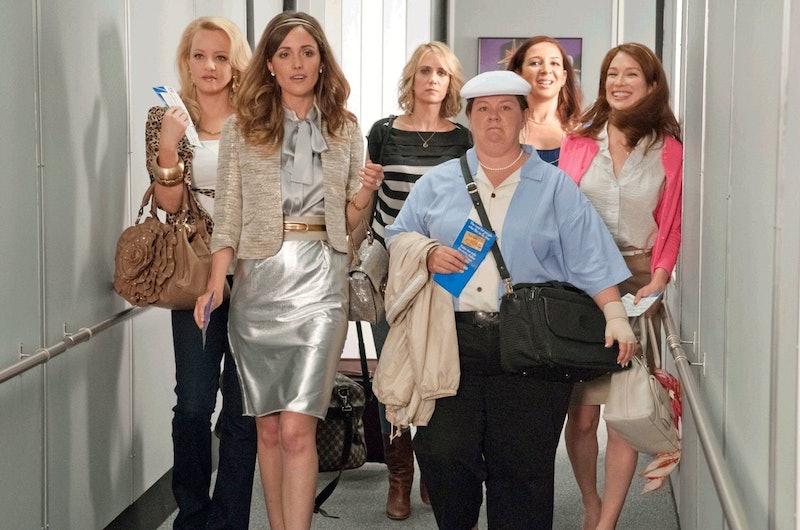 Annie and her friends may not have made it to Lillian's bachelorette party in Las Vegas, but the Bridesmaids cast did get to experience a girls' night out. During a recent appearance on Watch What Happens Live, Melissa McCarthy revealed that Bridesmaids originally featured a strip club scene, and the cast even went to a strip show in Los Angeles to do "research" ahead of filming. While the Oscar nominee didn't reveal why the scene was cut from the movie, she did say that the experience was just as wild and hilarious as the 2011 comedy itself.

"There was originally a scene in Bridesmaids where we went to a male strip club. So Kristen [Wiig] thought we should do research and we went to Hollywood Men," McCarthy recalled, adding that the show featured "wonderful dancers" who recreated various blockbuster films as part of their numbers. "The best part was they did sketches. [The announcer would say] like, 'Now, from Backdraft,' and there would be men in bikinis, but with [leather] dusters" over their skimpy costumes.

McCarthy continued by recounting how she and her co-stars "may have gotten each other dances" after the show, which resulted in an awkward moment between Rose Byrne and one of the dancers. "I just remember Rose Byrne with her hands up," she recalled, laughing. "[There was] someone dancing in front of her and she just was saying, 'Please don't ruin my blouse with all that body oil.'" (Her character, Helen, would be proud.)

The cast's strip club outing remains a fond and funny memory for the rest of the cast as well; in May 2019, Rebel Wilson shared some "racy" photos of the night as a behind-the-scenes look at the film. "Was just going through some old photos and found these from the night Kristen Wiig took the girls from BRIDESMAIDS to a strip club for cast bonding!" Wilson, who played Annie's roommate in the film, wrote on Instagram. In addition to some goofy photos of the cast laughing together, Wilson's post also featured a snapshot of Maya Rudolph mid-lap dance and Ellie Kemper watching the show in shock.

Bridesmaids became a massive hit after its release in 2011 and earned McCarthy her first Oscar nomination for her performance as the scene-stealing Megan. However, in 2019, she and the rest of the cast explained to Entertainment Weekly that the real reward for making the film was the bond the women formed during production.

"It was one of the most fun experiences I have ever had," McCarthy said at the time. In fact, director Paul Feig revealed that the entire cast broke down in tears on McCarthy's last day on set. "It was super sad," he recalled. "She was the first one leaving. She was crying, we were all crying — it was so emotional because we got so close." Rudolph, for her part, was so grateful to be working with women she could have fun with and support. "That's kind of all that mattered," she told the outlet at the time. "That is sort of the dream."