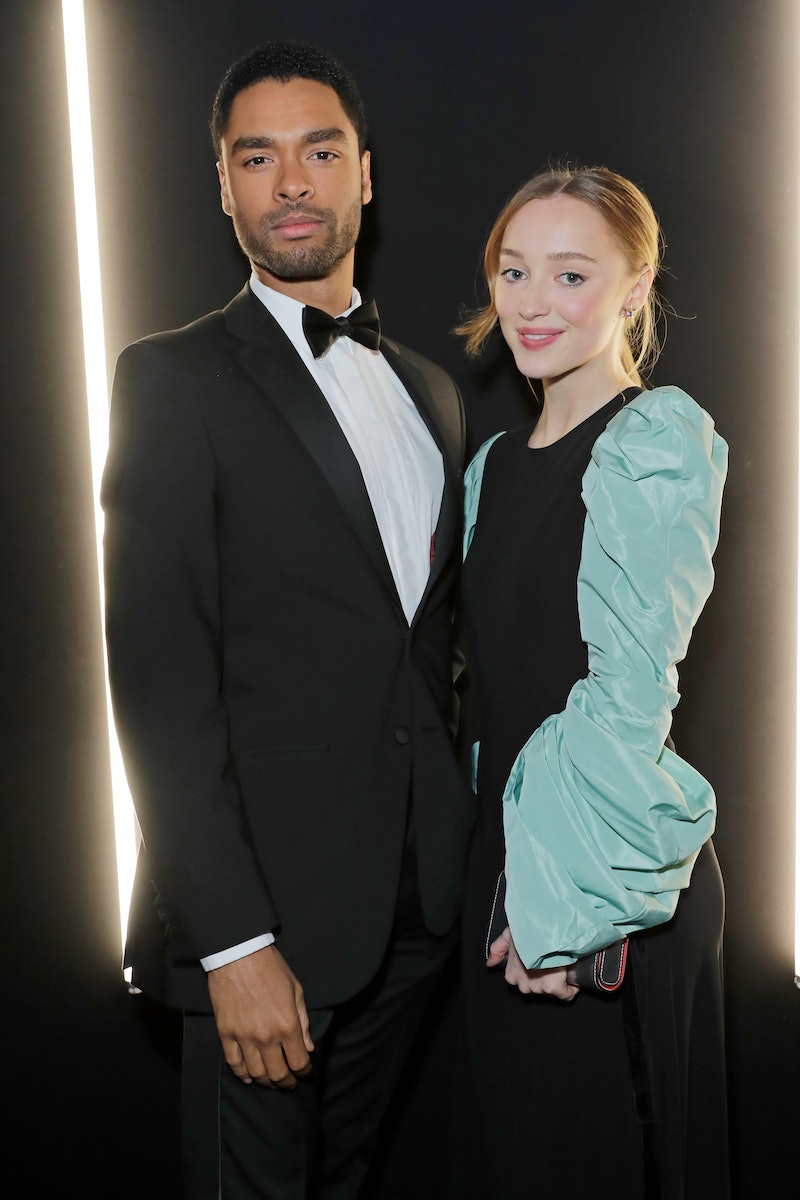 Anyone who watched Netflix's hit period drama Bridgerton over the holidays likely entered 2021 with a New Year's resolution to find a romance like Simon and Daphne's. However, their steamy relationship has not translated off-screen — at least not yet. On Monday, Jan. 11, Regé-Jean Page addressed the rumors he's dating co-star Phoebe Dynevor, and it's bad news for anyone who shipped the Duke of Hastings with the eldest Bridgerton daughter.

Fans of the hit Netflix series speculated that the show's leads were dating in real life simply because of their chemistry. But during a joint interview with Dynevor on Access Hollywood, Page confirmed the only sparks that flew between them were onscreen. "I think everything you need to know is on camera," he said. "That's why we presented it so beautifully for you. All the sparks that flew off of the beautiful scripts that we were handed, and so I think that the sparky scripted material are more than enough."

Luckily, Page and Dynevor have been able to laugh off the rumors rather than take them to heart. When the Access hosts noticed that they were both blushing and speculated that they were actually in the same room, despite being shown on two different cameras, Page joked that they were "playing footsie under here."

In an interview with Harper's Bazaar, Dynevor attributed their on-screen chemistry to the time they were able to spend off-camera while preparing to film the season. "We had six weeks of prep, so we had so much time to get to know each other," she explained, adding that their dance rehearsals really helped them bond and get comfortable with each other. "We just got time to play and sort of form a connection," she continued. "I think that was so beneficial actually in getting the chemistry right."

While Lady Whistledown and Bridgerton fans might be disappointed to learn the two are not dating, they can find peace in knowing they are both happily single and celebrating the success of the series. In fact, Dynevor already has some ideas if the show gets renewed for Season 2 (and given how over 63 million Netflix users have tuned in so far, it seems like a sure bet). "If the seasons are sticking to the books, then it's Anthony's turn to find love," she explained to Elle. "I want to see Daphne get involved in Anthony's love life a bit, as he sort of meddled with hers quite a lot. I think that will be fun."

More like this
Owen Warner Knows Exactly What Type Of Relationship He Wants
By El Hunt
Meet Kelly Fisher, Dodi Fayed’s Ex-Fiancée
By Karen Fratti
What Was Really In Princess Diana & Prince Charles’ Divorce Settlement
By Karen Fratti
The One Detail From The Tampongate Scandal That The Crown Missed
By Karen Fratti
Get Even More From Bustle — Sign Up For The Newsletter