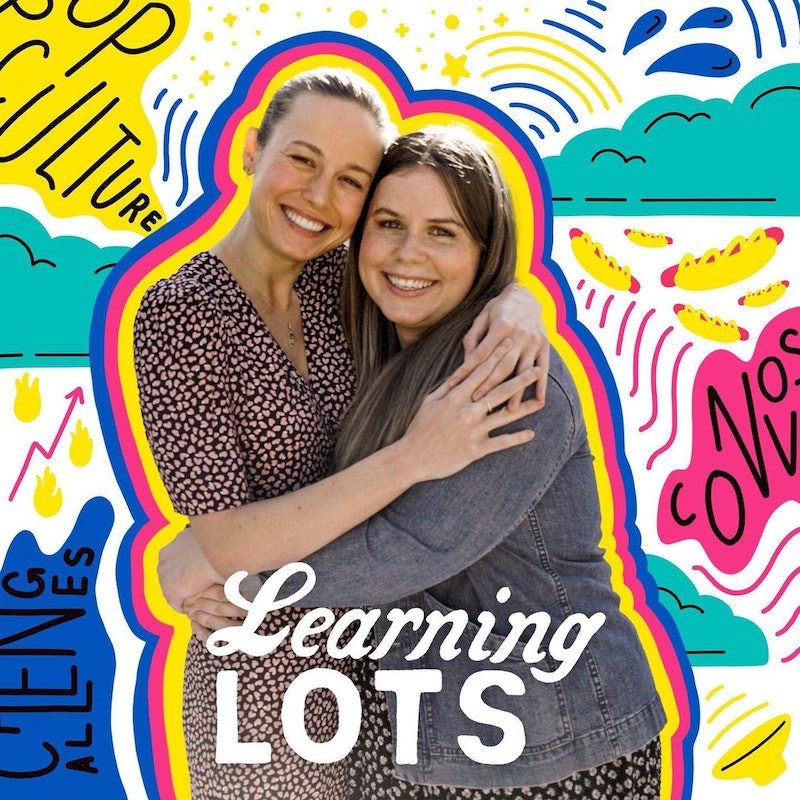 During last year’s racial reckoning, Brie Larson had the chance to reflect on the “privilege of conversation.” The Captain Marvel actor was enjoying private Zoom talks with activists and thought leaders, and couldn’t help but think, “I wish people could hear the things that I'm hearing and understand — when I'm speaking out or standing for something, it's actually coming from incredible advice I'm getting from really amazing people,” Larson tells Bustle. “I'm not just figuring this out on my own!”

So she teamed up with Jessie Ennis, her best friend and fellow actor, to launch Learning Lots: a podcast featuring discussions about everything from anxiety (with Bill Hader) to the nature of time and space (shoutout to quantum physicist Spiros Michalakis). Together, they’re revisiting private conversations publicly, and pursuing new topics with inspiring individuals — inside and outside of Hollywood.

There’s a special pleasure in pulling back the curtain. “Hearing from [Bill Hader] that he's still struggling with anxiety and that he has to utilize tools to manage his anxiety is really helpful,” Ennis says. Now, “anyone who wants to listen to those conversations can now also be privy to that information.”

Though the two prep obsessively before each recording session, they still try to be honest about where their knowledge ends. “Let's be real, after every time we record an episode, we call each other and we're like, ‘Was I okay?’” Larson laughs. She tries to remind herself, “The show is called Learning Lots, not We Know Everything Already ... We're here to learn and to hold ourselves accountable and to accept the fact that we don't know.”

Below, Larson and Ennis discuss Amy Poehler’s invaluable advice, the transformative power of scheduling, and their “love at first sight” story.

What’s been your favorite moment of the podcast so far?

Brie Larson: A highlight was having Amy Poehler come on. She's someone that’s inspired us both and has impacted our lives, personally and professionally. She's just got great advice. We allow our guests to pick their topic and sometimes it means we're talking about quantum physics, which is a little hard for us, [but] sometimes it means we're talking about confidence with Amy Poehler and then we're like, “Okay! We can get into that.”

Jessie Ennis: The Glennon [Doyle episode about “Truth”] was incredible, we had so much material that we had to cut down. I think we might release the full interview because there were so many useful tips that she shared with us. My favorite thing about doing this podcast is how much I actually am learning and then implementing in my life. I learned things from Glennon, my fiancé learned things from Glennon, we both quote [her] all the time.

What have you learned that most surprised you?

Larson: Recently, in talking with Russell Wilson, he said, “You know, Brie, to work at this high of a level, your time can't be random.” That blew my mind, because I don't even have children yet, I'm not married, I still feel like I have more space to roam about the cabin — and I still feel like it's hard for me to manage my time.

And so him talking about how he schedules, not just to work at a high level with that amount of pressure, but to also maintain a healthy relationship with his wife and kids — [it’s] just something I thought about a lot ... that my calendar is not just for work things, it's for things outside of that as well, and making sure joy and connecting with my partner is in there.

You've talked about how you first became friends a decade ago. How would you describe your friendship now?

Ennis: We're really like sisters; it's become family in a lot of ways. Brie once said, “I know something's up if you're MIA. It's obvious if we haven't talked in a while that you're trying to hide some kind of pain from me, and I'm here for that. Let's talk when you're struggling.” We've grown together; our 20s were spent in tandem in so many ways. It's not a challenge to remain friends, it's just very organic and lovely.

Larson: Yeah, it actually doesn't even require effort. It's not about a certain amount of time that we talk, even though we do talk all day, every day, about everything. It's just what is. The origin story that we both wore the same exact clothes three days in a row at theater rehearsals ... I remember seeing that she had the same color Converse as me, we're both wearing white skirts, we both have flannels tied around us, we both have the same T-shirt on ... Then I remember the end of the festival running around and crying and saying how special it was, but I don't remember anything in the middle of that. It's like love at first sight.

How has it felt to be so vulnerable about topics that matter to you, from anxiety to therapy?

Ennis: I think I'm the one struggling more with it. Brie's been in the public eye a lot more than I have, and she's revealed things about herself. I think she knows what she's comfortable talking about. For me, how it feels safer to do it with your best friend has been so vital. That first episode, I remember barely being able to listen to it because I just heard so much fear in my voice. I was like, “Oh, God! How am I supposed to do this every week?” I'm a comedic actor! I don't usually have to be so vulnerable, and if I do it's for a punchline. So lifting those layers and just letting myself be honest with my best friend and then be okay with that then becoming public has been a challenge at times, but always something I feel really supported in.

Larson: I think being vulnerable is cool.

Ennis: Yeah, but you know what I mean, cool girl.

Larson: Yeah. Let's be real, after every time we record an episode, we call each other and we're like, “Was I okay?” [Laughs.] We both have opposite fears. I'm always like, “Why am I always just making things so serious and intellectual?” We're both so self-conscious about ourselves, and then say it to each other. It's like, no it's fine. I just am. What am I gonna do, really, at this point? I'm doing my best.

You've both spoken out about a myriad of issues, from sexual assault to safety in the workplace. Do you plan to discuss topics like this on the podcast?

Larson: Yup, we have those episodes coming out. And some of it has just been [the availability of] people that we want to talk to, because they're actively doing incredible work. Talking about topic-driven issues that are more in the activism and human rights space are really helpful. And it's also really helpful to talk about confidence and anxiety and mental health. The more we do these podcasts, the more we realize it's interconnected. The idea of us all owning ourselves a little bit more, being open to learning what we don't know, is ultimately how we get to a better future.

Do you bring any insights you’ve learned into acting roles?

Ennis: If anything, being able to talk this much has helped me in interviews. I just did this long virtual press tour for Mythic Quest, and I've been talking so much on the podcast I'm a little more comfortable being myself now. For me, disappearing into a character is the joy of my life. Being myself sometimes is the biggest challenge. So getting to do this podcast has helped me embrace that I'm okay.

Larson: I agree with that. Like the Russell Wilson thing — you'll get these little pieces that [are] enmeshing into my life in a way that's really powerful. It's on my calendar that I'm having active, interesting, stimulating conversations. That can only help everything in my life. That only enhances my relationships, my work, my sense of self, my sense of community.

Ennis: Trixie and Katya from the [RuPaul’s] Drag Race world. Or I would love to interview AOC.

Larson: Probably J.Lo. Or Ariana Grande. But I think if J.Lo agreed, I'd be like, “I'm sorry to our listeners, the entire season is J.Lo now, every topic is whatever J.Lo wants, and it's 30 episodes.”