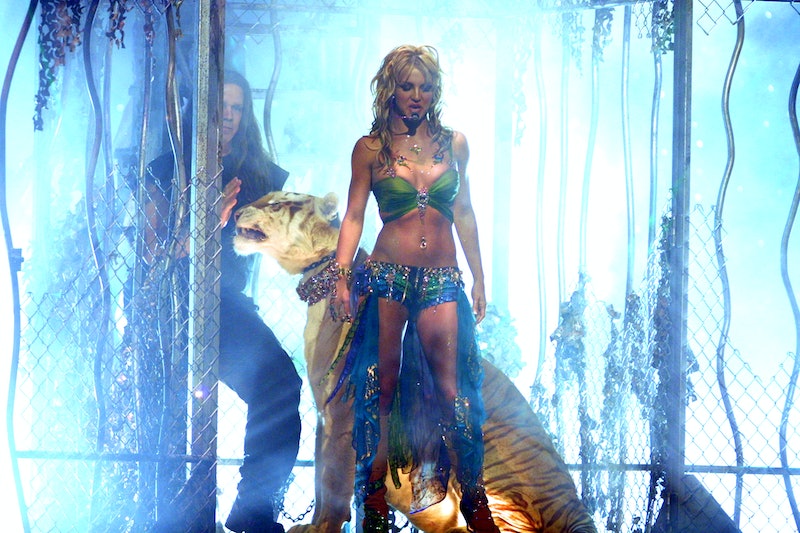 The fight to #FreeBritney rages on. Britney Spears says she won't perform again if her father remains her conservator, as her lawyer Samuel D. Ingham III said during a court hearing on Tuesday, Nov. 10. According to The Associated Press, Los Angeles Superior Court Judge Brenda Penny declined to remove James Spears from his daughter's conservatorship despite the singer's request. However, Penny said she would consider future petitions for his suspension or outright removal.

Spears has been under a court-appointed conservatorship since 2008, meaning that another party has control over her finances, business ventures, and even some day-to-day matters. Her father acted as her primary conservator until 2019, when he stepped down due to health reasons after an alarming incident in which he reportedly got physical with Spears' son Sean Preston. The questions surrounding her situation led fans to form the #FreeBritney movement, which seeks to not only prevent her father from having any control over Spears' life, but to dismantle the conservatorship entirely.

In August, Spears requested James be removed as her conservator permanently and to have an independent fiduciary take control of her financial affairs. This week offered an update in the ongoing case. "My client has informed me that she is afraid of her father,” Ingham told the judge during yesterday's hearing. “She will not perform again if her father is in charge of her career.” According to Spears' lawyer, who describes her as a "high-functioning conservatee," she has not spoken with James in a long time. Further, Spears was not notified of recent actions he took as her conservator, including his hiring of a new business manager after her previous one resigned without her knowledge.

James' attorney Vivian Lee Thoreen argued that he had not spoken with his daughter because Ingram prevented communication between the two. Thoreen defended his role as conservator, saying he brought her estate out of debt — it's now worth an estimated $60 million. She also addressed him hiring a new business manager, saying he had no legal obligation to notify his daughter of the decision and it was apart of his job to keep his daughter's business flowing. "I don’t believe there is a shred of evidence to support my client’s suspension,” Thoreen said.

Although Spears' request was not granted much to fans' disappointment, she did have a small win in court. The judge approved a corporate fiduciary, the Bessemer Trust, to serve as co-conservator of her estate alongside James, meaning Spears' father will not be her sole conservator. According to Rolling Stone, Spears' mother, Lynne Spears, appeared in court as an interested party and supported her daughter, saying the relationship between Spears and James was "toxic" and that he should be removed as her conservator. "It is time to start fresh," her attorney, Gladstone N. Jones, concluded.

More like this
Britney Spears Shares Unknown Details Of Conservatorship In New Voice Notes
By El Hunt
Twitter Is Freaking Out Over Rihanna’s 2023 Super Bowl Halftime Show Announcement
By Stephanie Topacio Long
Everything To Know About Taylor Swift’s 10th Studio Album, 'Midnights'
By Grace Wehniainen and Jake Viswanath
What Demi Lovato Really Thinks About Child Stardom, Depression, & Sobriety
By Radhika Menon
Get Even More From Bustle — Sign Up For The Newsletter