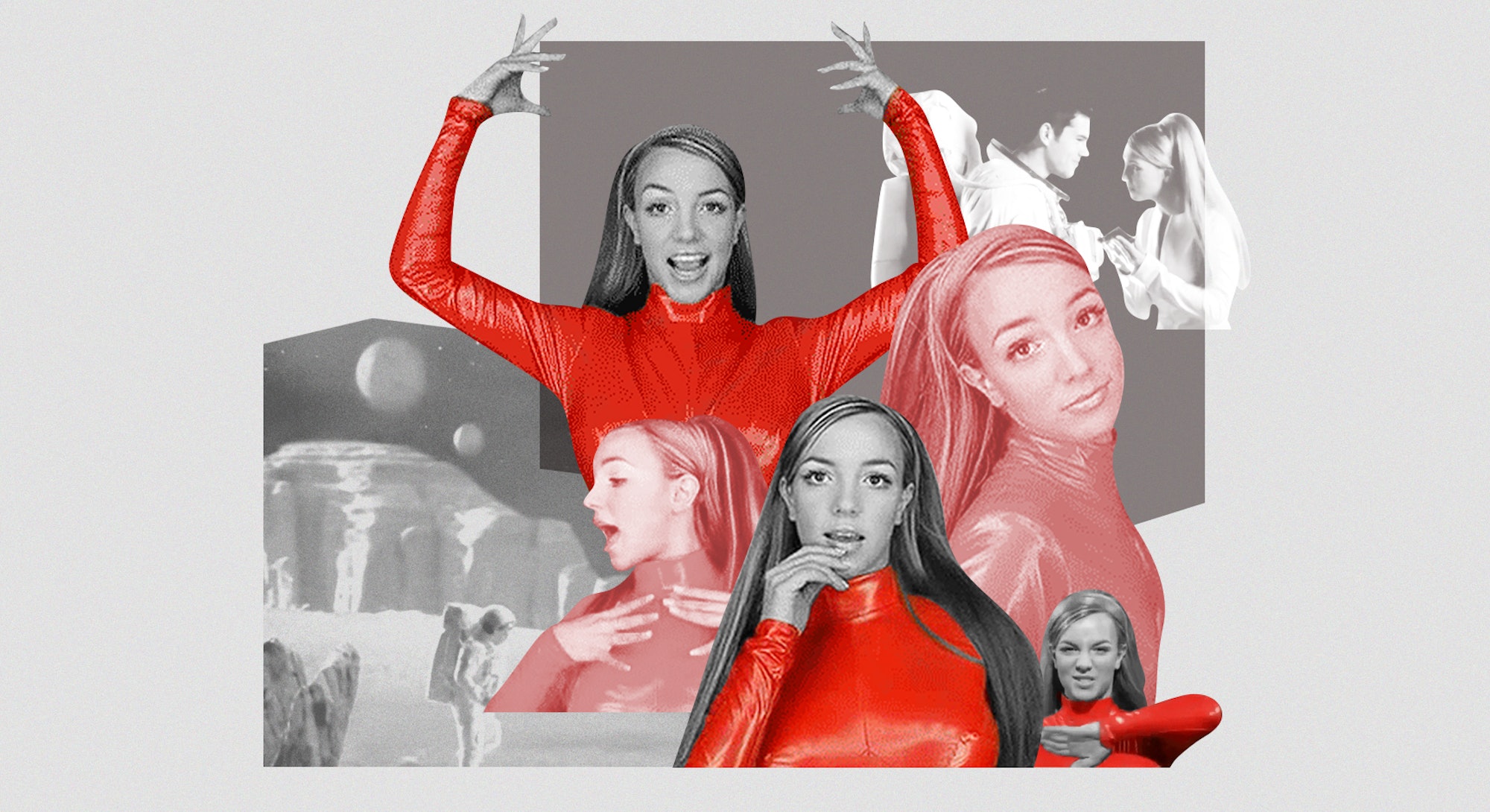 There are few images more synonymous with 2000s pop culture than Britney Spears in a red latex catsuit. Introduced via the music video for “Oops!...I Did It Again,” the flashy, form-fitting ensemble signaled a shift in the young pop star’s look. She’d been only 16 when she released her first single, “...Baby One More Time,” in 1998, and her image thus far had reflected her youth. In the companion video for “Baby,” Spears wore a school uniform, fuzzy hair ties, and pigtails; in 1999’s “(You Drive Me) Crazy,” she portrayed a dorky waitress. “Oops!” aimed to re-establish her as not a teen artist, but a woman.

Written and produced by Max Martin and Rami Yacoub as the title track of Spears’ sophomore album, “Oops!” centered around a woman toying with her lover’s emotions. The music video, released on April 10, 2000, featured a 19-year-old Spears as a sexy alien on Mars serenading a lovestruck astronaut. Between the early aughts special effects, the inexplicable Titanic reference, and, of course, the catsuit, it was a lot to take in — and still is two decades later. For the video’s 20th anniversary, Bustle spoke with members of the crew, Spears’ team at the time, and tastemakers during the time of its release.

On March 27, 2000, Spears released “Oops!...I Did It Again" on Jive Records. The track, which pays homage to the dichotomy of Spears’ burgeoning sexuality and innocence as a young woman, became an era-defining pop anthem.

Marilyn Lopez, PR coordinator at Jive Records: I remember marketing meetings being about [how “Oops!” was] her way of taking it to the next level. She had "...Baby One More Time," when she was 16, but this came out when she was 19, so it was her entry to the “racier” Britney Spears.

Kim Kaiman, product manager at Jive Records: She loved the idea of being an alien, but a sexy alien, like a Barbarella. She wasn't familiar with [the 1968 film] Barbarella because she [was] quite young, but when we were putting the video together, we all knew that was a classic movie with Jane Fonda where she came off as this very sexy alien, but she didn't really realize the breadth of her sexiness.

Lori Majewski, former editor of Teen People and current host on SiriusXM's Volume channel: There's a line in “Oops!” where Britney says, "I'm not that innocent." It's funny, looking back at it, she was much more innocent in the “...Baby One More Time” video. In that time period, she goes from being coy and kind of playing with the camera, to just full on... How could I put it? She became a full-on sexual being.

The companion music video was largely conceptualized by Spears and executed by director Nigel Dick. It was shot in two days.

Declan Whitebloom, editor: [Nigel] had to come up with all this cool story out of nothing. He did the whole spaceman going to Mars [thing] and then there's the whole breakdown where [the astronaut] meets her and she says that line about finding [the necklace] under the sea and that's from Titanic.

Nigel Dick, director: [Spears] gave me those opening notes, and then the rest was me. I had to fill in all the gaps: [the] red planet, the guy in the control room in NASA completely ignoring the fact that there would have been a 25 minute radio delay between Earth and Mars. But these are practical considerations you just ignore, so [the guy in the control room] can speak to the spaceman and get a direct response.

Whitebloom: It must've been at least a two-day shoot. [Nigel] built all these sets, and it's remarkable how much stuff there was. But when I was approaching this kind of thing, it's all about making the dancing look as good as it can be, which is always easy with Britney because she's such a consummate dancer.

Dick: She wanted to be on Mars. She wanted to be in a red suit. She wanted a handsome spaceman, and she did not want there to be a rocket ship. So, that makes it a lot easier for me as a creator because I knew the world that she wanted to be in. There was the issue of the Titanic moment in the middle of the song, and when we had our initial conversation I said to her, "Well, what am I supposed to do with this?" And her answer was very simple. It was, "I'm sure you'll think of something."

During production, there was an accident on-set: a camera fell on Spears’ head. But there were varying versions of how serious it was at the time.

Landon: [All the dancers] are laying on the floor, and Britney's right in the center. And as we were setting up for one of the takes, Britney was there, she was in position, they were trying to light her and focus the camera, and the camera actually fell on her face.

Estee Stanley, stylist: It was really scary and very strange. I'd never seen anything like that happen on set, and I've been on many, many sets for music videos. But she was a trooper.

Lopez: She had to get stitches for it during the shoot, which delayed it a bit. And then when she felt better, she finished the shoot, after getting stitched up.

Kaiman: It's always frightening when an artist gets hurt. You don't want that ever to happen. But it wasn't a really bad injury where she had to be hospitalized or anything .... It wasn't really as big of a deal as I think people made it out to be.

Dick: I've read stories that the entire camera fell off the crane, or the crane hit her and she was rushed to hospital, which was not the true story. Certainly nothing should've come off the camera at all, and I was very upset with the camera department that they had allowed that to happen.

Throughout the last two decades, Spears’ red catsuit has become one of her most iconic outfits, even becoming a popular Halloween costume. But the look was initially planned to be quite different.

Dick: One of the four things that Spears wanted was a red suit. So we did our normal research, we had a wardrobe person hired, and we found a suit, which I thought was gorgeous. We also had some red sneakers for her, which looked great, and I thought she looked fantastic. The night before the shoot, I was informed that Britney had hired a guy who did wardrobe for Michael Jackson to come up with a suit that she was going to wear on the day. So, she rejected our suit. One's plans of having this gorgeous outfit all put together, which really had some style, I felt, were just chucked out the window and we went with a rubber suit basically.

Stanley: That idea [for the catsuit] really came from [Britney]. It was obviously very collaborative with [Nigel] and everybody, but it was something she really wanted to do.

Dick: [In the video], she appeared in the clingfilm outfit that we're now very familiar with. And after one take the red boots got rejected because they were uncomfortable, so she did the rest of the video in the black sneakers, which was sort of a beaten up pair of sneakers that she happened to be wearing when she arrived that day.

Stanley: That catsuit was my worst nightmare because she danced so much. That suit was made from latex, so every time she did one take, it just held in all of the water and sweat. We would take it off after every take and literally a bucket of water would pour out. I felt like it was really intense for her. But it made a splash.

Kaiman: [Her] hairstyle was very 1960s-looking, and the red suit, which even though it covered her up, showed off her body. She liked that.

Because Spears was such a skilled dancer, choreographer Tina Landon was thrilled to work with her.

Tina Landon, choreographer: At that time, I had already been working with Christina [Aguilera] and some of the other pop stars around her era. I’d never worked with Britney and I loved her. The thing that I loved about Britney that I knew was going to be fun was that she was a dancer.

Kaiman: Britney was working with a choreographer that was really well-known for doing these very kind of intricate dance moves. Britney was wearing these platform Skechers sneakers when she was dancing, and she actually ended up twisting her ankle and getting seriously hurt. She couldn't perform [“Oops!”] and couldn't tour for a while because she had to heal from the injury that she got from making that video. She powered through [during filming].

Landon: The way she moved [in the red catsuit], I mean, I was there coaching her on the side, but I really let her be free and let her find her own movement. I think everything gelled together with the choreography, with the wardrobe, with the attitude.

Eli Swanson, Spears’ hunky love interest in the music video, is no longer an actor: he’s a doctor.

Dick: I'm sure I picked two or three guys with probably somebody who was recommended, and [Eli Swanson was] the guy we came up with. I am led to believe, if you go onto the web, that he's now a surgeon in Arizona somewhere. I'm sure he's tired of going into surgery and putting his rubber gloves on and somebody piping up and saying, "Are you the guy from the Britney video?"

Twenty years later, Spears and the impact of “Oops!...I Did It Again” have remained, representing a time capsule for when the pop star began to mature.

Dick: I get great pleasure out of the fact that people think it's this iconic video. I'm glad I hit the target but I'm not entirely sure how I managed to do that.

Landon: Britney was such an icon, and that really was a time I felt that she was starting to come out of her little girl self and turn into more of a woman, even though she was quite young still.

Majewski: The thing that is so cool about the “Oops!” video is it’s a “wink-wink.” It's not full-on sexuality in a way that Madonna did it [or the] way that Christina Aguilera did it with “Dirrty.” There is sweetness to Britney Spears. I think that it's really never better on display than in the “Oops!” video.

Stanley: Britney started off in a school girl uniform and then went to [a catsuit]. I think she was definitely trying to tell people she was a sexy girl, and “Don't you forget it.”