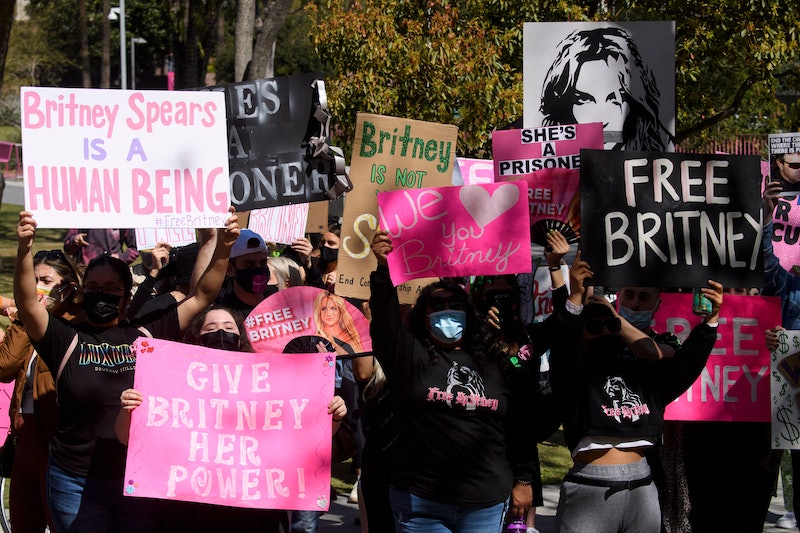 Ever since Britney Spears broke her silence on her conservatorship in court on June 23, fans have been saying “Gimme More” to the Los Angeles courts, asking what can be done to free Spears from the controversial legal arrangement. Her conservatorship will be addressed yet again on July 14, when the next court hearing will take place. But although fans were able to hear Spears’ emotional testimony live as she spoke, listening into her next hearing may be more difficult this time around.

After her landmark testimony on June 23, Spears requested that the following court hearings on her case be sealed, which was agreed upon by all parties. In addition, Los Angeles courts ended the remote audio program entirely after listeners recorded Spears’ hearing and posted the audio online, which Judge Brenda Penny specifically prohibited. Therefore, even if the hearing wasn’t closed to the public, fans who can’t show up at the courtroom wouldn’t have been able to listen in. However, it’s likely that major findings and statements from the hearing will trickle out of the courtroom from reporters, and a transcript may eventually become available.

According to US Weekly, Spears will call into the July 14 hearing and participate, but she’s not expected to speak or give any further statements at this time. According to NPR, the hearing will primarily focus on Bessemer Trust’s petition to withdraw from the conservatorship. In September, Spears requested that Bessemer Trust, an “independent financial fiduciary,” replace her father Jamie as conservator of her estate. Instead, the judge allowed them to serve as co-conservators alongside Jamie. Now, Bessemer Trust wants to resign completely, stating their prior belief that Spears was in the conservatorship voluntarily.

The hearing will likely also address the recent resignation of Spears’ court-appointed lawyer Samuel D. Ingham III, who stepped down from his post on July 6. In light of his resignation, the court will have to decide whether Spears will be allowed to hire her own legal counsel, which she requested to do in her testimony, or if they’ll appoint another attorney to represent her.

As reported by the New York Times on July 11, Spears is reportedly in discussions with well-known entertainment lawyer Mathew S. Rosengart to take over as her representation in court. The former federal prosecutor has represented many A-list stars, including Sean Penn and Steven Spielberg. However, Rosengart’s appointment would have to be approved by a judge before Spears can retain him, and it’s not known for certain whether the court will make a decision regarding Spears’ legal counsel on July 14.

While it is possible that a petition to end Spears’ conservatorship may finally be filed in court on July 14, Ingham’s resignation makes that scenario difficult unless Spears is able to secure new attorneys in the coming days, which cannot be done without a judge’s approval. No matter what happens, #FreeBritney activists will surely be waiting outside the courthouse with bated breath.