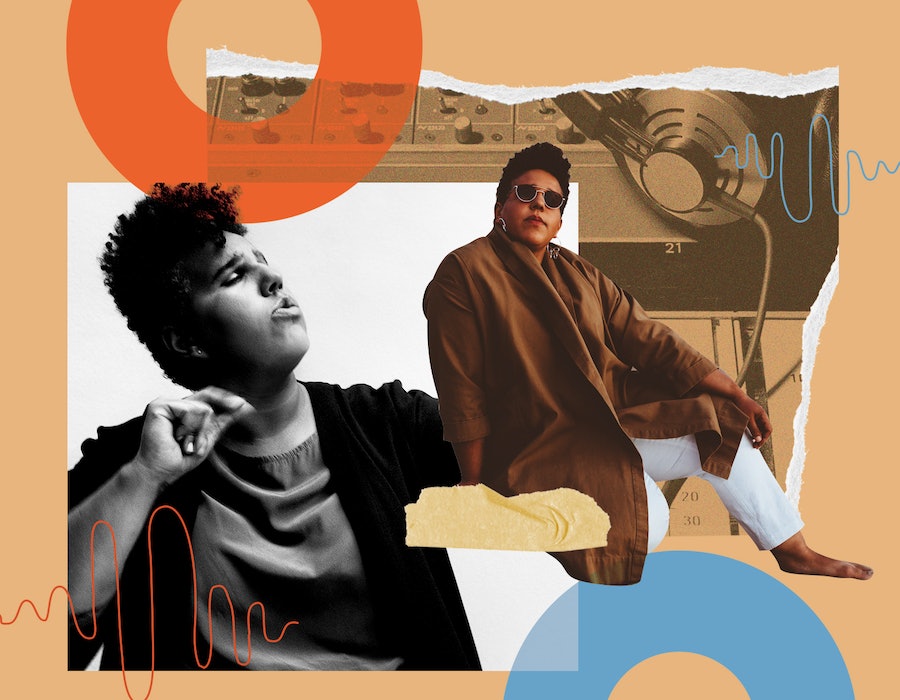 Courtesy of Brittany Howard
By Ivana Rihter
May 13, 2021
Bustle Mixtape

The first time Brittany Howard stepped up to a microphone was at an Alabama carpentry shop where her grandmother's sister's husband’s bluegrass band was playing. She sang “Hound Dog.” “I remember just how incredulous I was that people liked it,” Howard tells Bustle. “Because then when I was a teenager and I was playing all this music, it wasn’t good.”

Now, Howard’s music is unmistakably good. The powerhouse vocalist and musician got her start fronting the Alabama Shakes, swiftly rising through the ranks of the music industry in the early 2010s after the Shakes’ single “Hold On” from their debut album Boys & Girls became a huge hit. Grammy nominations and a relentless tour schedule followed; the record went Gold soon after.

The band’s 2015 sophomore album Sound & Color brought further acclaim before Howard broke away from the group to make her solo album in 2019. Named for her sister who died at 13, the autobiographical Jaime shows a more intimate side of Howard. She writes about her sexuality, her family’s experience with racism in her native Alabama, and her growing awareness of herself. “My whole intention behind this record was just examining myself, my life, and how I got to where I am,” Howard says.

The album’s themes of exploring Howard’s identity as a woman coincide with her renewed focus on helping more women gain a foothold in the music industry. She recently partnered with Jane Walker to work with the IFund Women program, which gives grants to women-owned businesses. “I just know when I was coming up, if somebody had offered me a hand, I would’ve done multitudes with it,” Howard says. “My work’s never done.”

After the pandemic cut her Jaime tour short, Howard was forced to contend with who she is outside of playing music. These days, that consists of fishing and working on a boat while quarantined with her wife and fellow Thunderbitch bandmate Jesse Lafser. “I had to be home, and [suddenly] there's everything else that I wasn't paying attention to,” Howard says. “Everything else is also amazing, so that kind of opened my whole eyes. I feel like I'm just seeing everything for the first time in a really long time. It's been emotional.”

Below, Howard talks about her love of Björk, making it through tiring tours, and the song she’s most proud of.

On Third Eye Blind and her cooking soundtrack

What was the first CD you ever bought?

Third Eye Blind. I was in fourth grade and I liked the song they had out, so I bought the record. Still to this day, I will listen to that record.

What were your first memories of music?

Playing music with my uncle or my sisters, playing piano in my grandma’s living room and listening to my grandma’s records. She always listened to music when we cooked food, cooking was a big part of my childhood and being with family. I would listen to ‘50s and ‘60s pop music, you know, those were my first memories and stuff like The Supremes and doo-wop groups.

Björk, always my obsession. She doesn't care what anybody else is doing, she’s just sitting in Iceland and doing her own thing and I really respect that, and I am fascinated and impressed by everything she does.

“When the Lights Go Down” by Journey. That is an old school song.

On success, touring, and the song she’s most proud of

Do you have a moment where you thought you “made it” as a musician?

Nawww, I don't know if I do that. I kind of have a weird mentality. I go back and forth between, “Oh, this is nice, I'm so proud of how far I’ve come,” and like, “I’m not doing anything right now, I need to be doing something. Where am I going? Which direction?” It kind of vacillates between those two things, it's very confusing.

Do you have a moment you almost gave up on music?

On tour, there are nights where you question why you do it, but when you don't have the answers just waiting around the corner for you. You’ll rediscover why you love doing this, and that keeps me going. But it also can start changing, and it keeps things fresh, which is a must.

How did you make it through those tough moments?

I was touring for years. You get tired, you know, it's physically and mentally and energetically draining, so it was really important to love what I do and create things that I love. And doing that and being with the people that I’m with, my musicians that I’m with on tour, they’re more than just hired musicians, they become family. I noticed that whenever I was missing something that day, one of them had what I was looking for, so we got through it that way, and it's not lost on me that we give each other strength to do what we do. And then of course the fans. That's what makes it worth it, just sharing this music together.

What’s a song you’re proud of?

I’d go with “Sound and Color.” I'm proud of that song. There are several reasons why, but part of it was writing something really strange and bringing it to the guys and them being like, “Yeah, let's do it,” and then hearing it actually come to life with the string section I wrote. That was an incredible moment. I was really proud. But because of the pandemic, this song is more relevant than ever — that song is all about this loneliness and this faraway-ness and wanting to be close to your fellow human beings.

More like this
Somebody Convince Soccer Mommy To Make A Metal Album
By Samantha Leach
Zooey Deschanel Can't Be Anyone But Herself
By Samantha Leach
Harry Styles Helped A Fan Come Out As Gay In Dramatic Fashion At His London Show
By Jake Viswanath
J.Lo Uses They/Them Pronouns To Introduce Her Child Emme For A Special Duet
By Jake Viswanath
Get Even More From Bustle — Sign Up For The Newsletter