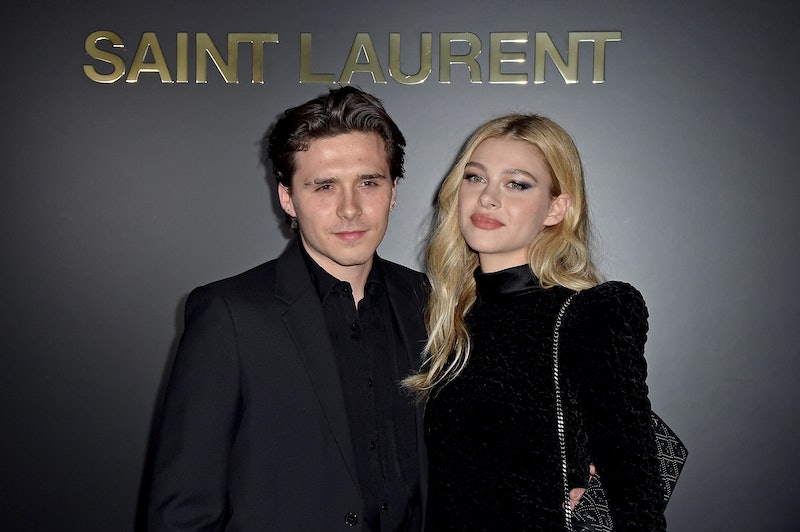 Two are about to become one — one happy family, that is. Not long after rumors of a possible engagement began swirling online, Brooklyn Beckham and Nicola Peltz announced that they're engaged by sharing a matching pair of romantic Instagram posts. "Two weeks ago I asked my soulmate to marry me and she said yes," the model and photographer wrote on Instagram, alongside a photo of himself and Peltz embracing in a garden. "I am the luckiest man in the world. I promise to be the best husband and the best daddy one day," the 21-year-old continued, adding, "I love you baby."

Peltz — who is best known for her role in 2014's Transformers: Age of Extinction — shared the same photo on her own Instagram account, where she wrote that Beckham had made her "the happiest girl in the world" by proposing. "I can’t wait to spend the rest of my life by your side," Peltz continued. "Your love is the most precious gift. I love you so so much baby." The actor and model also revealed that the romantic photo was taken by Beckham's 9-year-old sister, Harper, making their big announcement a true family affair.

Beckham and Peltz first went public with their romance back in January, when he shared a PDA-packed selfie on Instagram to celebrate Peltz's 25th birthday. “Happy birthday babe xx,” he wrote at the time, adding that Peltz has "such an amazing heart xx." Since then, the pair have made plenty of appearances on each other's social media accounts, where they have described one another as "my other half" and "my best friend" over the past few months. Back in February, Beckham revealed that his relationship with Peltz was pretty serious, and he promised his partner that he would "always take care of you and to love you with all my heart."

Brooklyn's mother, Victoria Beckham, shared her excitement over her son's engagement on her own Instagram account, writing that it was "the MOST exciting news. We could not be happier that @brooklynbeckham and @nicolaannepeltz are getting married!" the fashion designer continued. "Wishing you so much love and a lifetime of happiness. We all love you both so much." In response to the supportive post, Peltz shared her excitement to join the Beckham family, and thanked the fashion designer for her kind words. "I love you so so much Victoria," the actor wrote. "I’m the luckiest girl."

Back in 2017, Beckham told The Cut that it was important to him that his family approves of his romantic partners. "[My mother] always said she'll like any girl that I bring back, or anyone like a mate," he said at the time, adding that his father, David Beckham, feels the same way. "[They] are both kind of the same, they can tell who's nice and who isn't."

And it turns out that the Beckhams have always been involved in their eldest son's personal life; in 2015, David revealed during an appearance on The Late Late Show that he actually went on Beckham's first date with him. “I’m fine with [him dating], because on his first date – when he was about 14 and a half – it was Valentine’s day so he said, 'I’d love to take this girl to dinner,'" the soccer star recounted, adding that his wife insisted that he accompany the teens. "We took him to a small sushi restaurant and he sat at the sushi bar and I sat about five tables back." Now that he's an adult, it seems like the Beckhams couldn't be happier about their son's new partner — or about him finally getting ready to tie the knot.