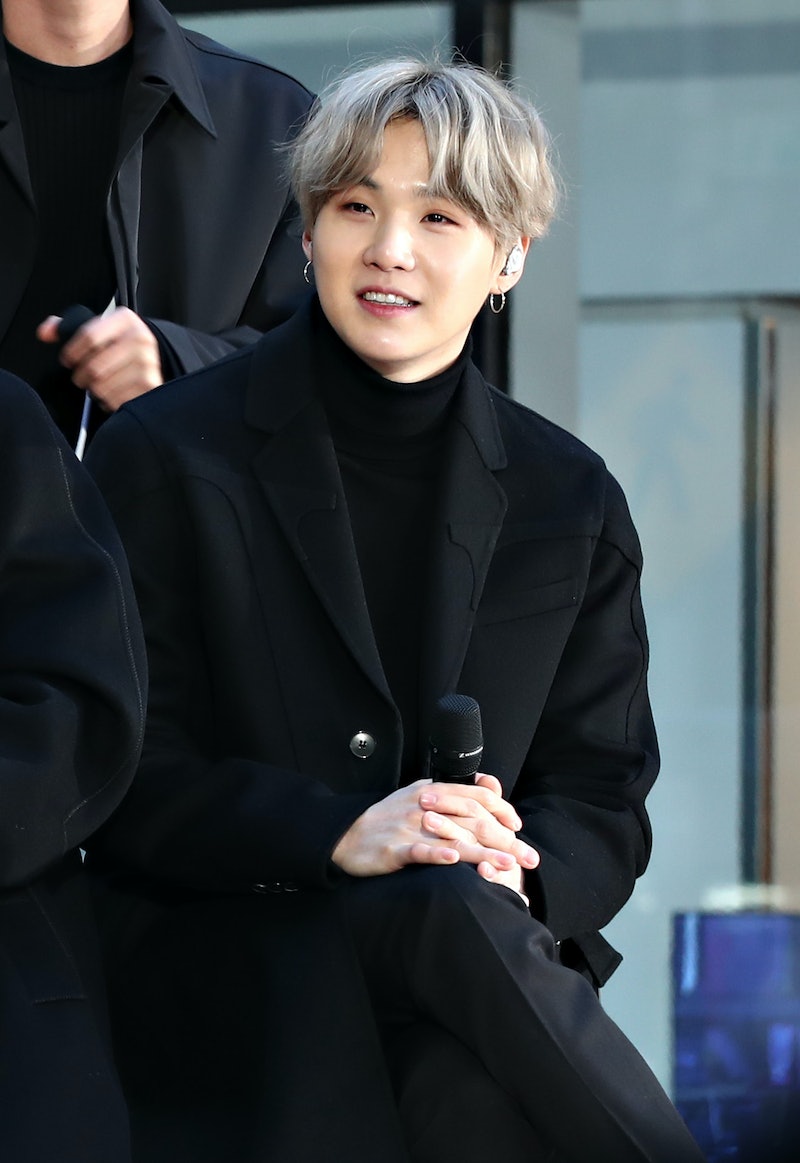 The BTS ARMY showed nothing but real love after Suga (real name: Min Yoon-gi) underwent shoulder surgery on Nov. 3. "The surgery, to address a problem that had constantly been a health and wellness issue for Suga, was completed successfully, and he is currently resting and recovering following his physician’s advice that Suga must undergo a strict and unhindered period of recovery," the K-Pop group's Big Hit Entertainment label announced in a Nov. 6 statement via WeVerse.

The statement explained that Suga's shoulder issues began following a 2012 accident, and he was subsequently diagnosed with a dislocated shoulder a year later. The musician continued to live with the pain, and he was ultimately diagnosed with a posterior labral tear of his left shoulder in 2019; the label described the injury as torn cartilage around his shoulder. According to the statement, Suga "has long suffered from a variety of symptoms" from the injury, including decreased arm mobility and "sudden bouts of pain." Despite ongoing physical rehab and treatment, his symptoms continued.

A 2018 Burn the Stage episode revealed that Suga was hit by a car while working as a delivery boy back when he was a Big Hit trainee, before making it big, per People. He also reportedly hid the resulting dislodged shoulder from the company, but got help with his recovery once the injury came to light.

In its statement, Big Hit Entertainment further noted that Suga "felt that it was important for him to restore himself to good health to prepare for his mandatory military service as well as his post-service musical career." Now, he'll have to step back from most official activities while he begins physical therapy. "It may be difficult for Suga to meet his long-awaited fans for some time, including for the upcoming BTS BE album promotional activities," Big Hit said. "We apologize to every fan who has waited patiently to meet Suga again, and we ask for your generous and loving understanding."

"Fortunately, the surgery went well. My current state is painful, but my mind is quite relieved," he wrote in Korean, per People, before adding, "I'm away for a while to recover as quickly as possible, but I'll be back soon. It won't be that long! Once again sorry and thank you, ARMY!" (BTS is currently scheduled to perform "Dynamite" at the American Music Awards on Nov. 22.)

Although it remains to be seen when Suga will be back on stage, the BTS ARMY seems to be behind him. According to Billboard, after the surgery news broke, the #GetWellSoonYoongi hashtag quickly started trending.

More like this
Ariana Grande & Kristin Chenoweth Sing A Wizard Of Oz Classic On TikTok
By Alyssa Lapid
Beyoncé & Blue Ivy Performed A "Brown Skin Girl" Duet At Her Private Dubai Concert
By Brad Witter
Cruz Beckham Teased New Music With An Adorable Nod To Mom Victoria Beckham
By Stephanie Topacio Long
"Lavender Haze" Star Laith Ashley Breaks Down Filming With Taylor Swift
By Jake Viswanath
Get Even More From Bustle — Sign Up For The Newsletter
From hair trends to relationship advice, our daily newsletter has everything you need to sound like a person who’s on TikTok, even if you aren’t.