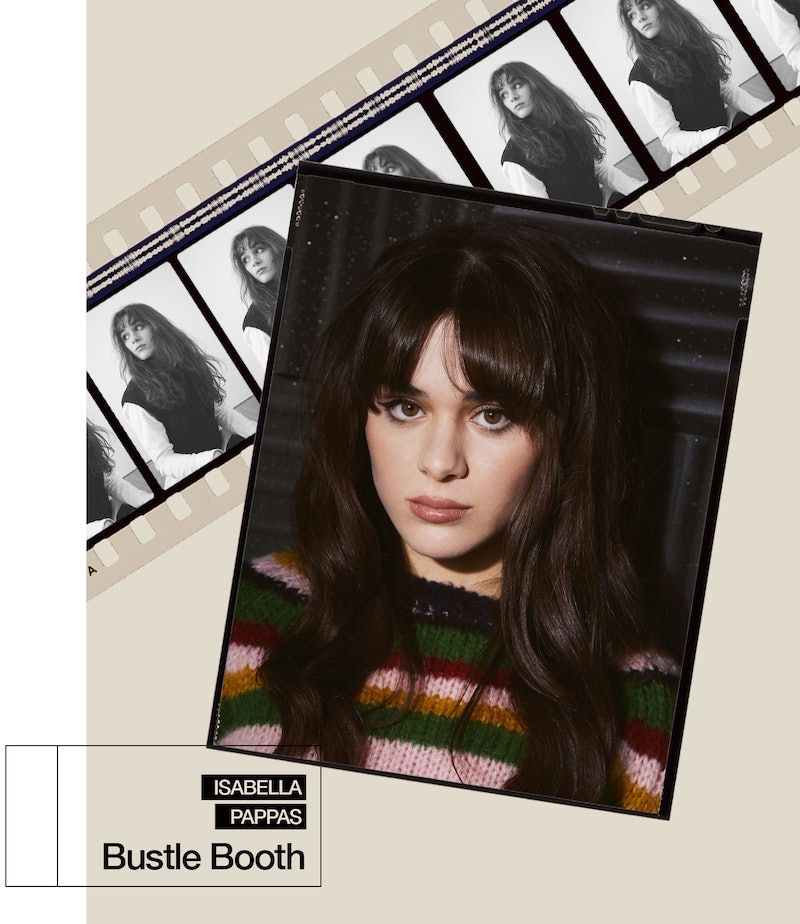 Isabella Pappas considers herself a "planner," which is a funny thing for an actor, she says, considering you can't predict when your next job will be. "I think I compensate by planning every other aspect of my life," she laughs as we chat over Zoom. But she's happy to allow her burgeoning acting career to blossom naturally. "Let's see what happens," she smiles.

Right now, the 18 year old is currently starring in the new ITV drama Finding Alice – her first major TV role. The six-part drama follows a woman's journey through grief after the sudden death of her husband of 20 years. As ITV puts it, Finding Alice is an "honest, raw, blackly comic" look at life after death.

Pappas takes on the role of "emotionally stifled" Charlotte, the daughter of Alice (played by Keeley Hawes) and granddaughter of Sarah (Joanna Lumley).

For British-Italian-American Pappas, working with the acting heavyweights was the "best kind of acting school" and Hawes especially taught her how to be a "considerate actor" – most helpfully during back-to-back sobbing takes.

"I feel so lucky because every day on set I learned something new from them – which I don't think is a privilege a lot of actors get to have, especially on their first big TV role," she beams.

A graduate of London's prestigious Sylvia Young Theatre School, Pappas gives you the impression she was more than equipped to handle her Finding Alice character, whom she found "emotionally cathartic."

"I put a lot of myself in the character – the most intense version of myself – and went from there," she explains.

As we chat about the heavy themes contained within Finding Alice, it's easy to forget that Pappas is still a teenager. I steer the conversation towards social media and she tells me Instagram is something she tries to limit. "I remember being 12 and downloading an airbrush app. And I remember thinking, 'What am I doing?'" she tells me.

Aside from the fame thing, Pappas is just like other young people her age attempting to remain hopeful about life after lockdown. "I have a huge Pinterest board of places I want to travel to," she laughs. For now, though, she's keeping herself busy by sewing her own clothes (or at least attempting to) and playing piano.

Pappas really sparkles when she talks about her love for acting, which started as a child on a farm "in the middle of nowhere" in Italy. Here, her large Italian family would entertain her with "crazy Italian fairytales." Her passion for this kind of storytelling led her to the theatre and, at 11 years old, she landed the role of Iris in the Royal Court Theatre production of The Nether.

"Nothing can match the rush of being on stage," she gushes, "all of these people watching you and [you're] controlling the emotion of the room."

Despite an early love for theatre, Pappas is so excited about TV acting and she's thankful to Finding Alice for allowing her to tell a meaningful story. "I hope that people can watch the show and know that any form they experience grief in is acceptable," she says. "It's all just human."

Get to know more about Pappas with her Bustle Booth questionnaire below.

Leo, which I think suits me very nicely.

"Buon giorno principessa!" from Life is Beautiful by Roberto Benigni, which is overused with joy in my family!

Kim Possible is what I grew up on so I’d say she takes the crown!

All time favourite and current obsession has to be Buffy the Vampire Slayer. It’s got charm (Spike) and one of the strongest female characters on TV (Buffy of course).

Someone who’s work has inspired me recently is Odessa A’Zion for her work in Grand Army. She told her character’s story beautifully

Wipeout – just to see how embarrassing I could be.

"These Boots Are Made For Walking."

The immense effort especially amongst my friends and those I know to consciously preserve the planet in any way that they can.

That I’m kind. I know a lot of people say that but I think kindness in highly underrated nowadays.

More like this
Yes, 'The Price Of Glee' Is Available To Watch In The UK
By Catharina Cheung
Twitter Is Burning As Phoebe Dynevor Reveals Daphne’s 'Bridgerton' Exit
By Sophie McEvoy
Helena Bonham Carter Doesn't Think 'The Crown' “Should Carry On"
By Sam Ramsden
'Abbott Elementary' Fans Probably Missed This 'Parent Trap' Easter Egg
By Sam Ramsden
Get The Very Best Of Bustle/UK
Sign up for Bustle UK's twice-weekly newsletter, featuring the latest must-watch TV, moving personal stories, and expert advice on the hottest viral buys.