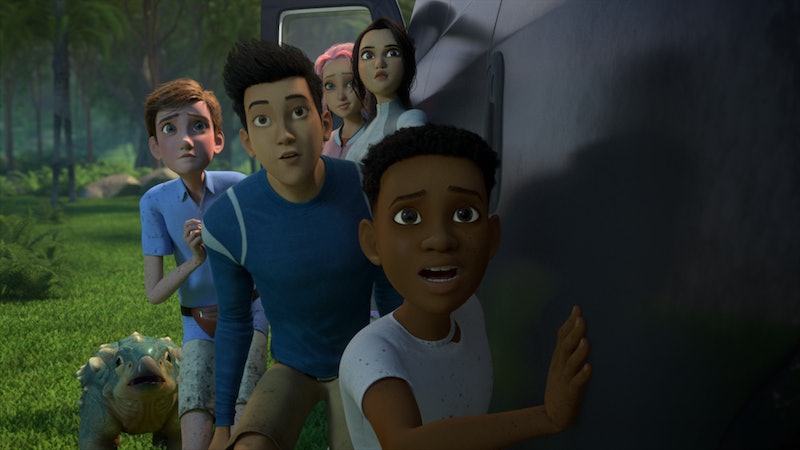 Update: Camp Cretaceous has been renewed for a third season, set to premiere on May 21.

Earlier: With the major cliffhanger that Camp Cretaceous just ended on, fans are hoping that the animated Jurassic World series will be renewed for a Season 3 ASAP. The good news with Netflix Kids content is that the seasons tend to roll out on a faster timeline than the streaming site's regular content.

While most Netflix shows go a year between seasons, the animated kids' shows tend to air new seasons about every three to six months. That was the pattern for recent popular series like She-Ra and the Princesses of Power and Carmen Sandiego. Netflix couldn't confirm a renewal or premiere date plan for Camp Cretaceous Season 3 to Bustle, but so far the show has fallen into a similar pattern as the site's other animated kids' content, and Season 2 came out about four months after Season 1. By that logic, fans may be able to expect Season 3 around May or June 2021.

News of a Season 2 renewal came in October 2020, a few weeks after the first season aired, so expectant fans could receive good news about a third season in February. And even if it's not official yet, all signs point to the show continuing on. For one, the first season performed well for Netflix not just among young viewers, but overall. The day after its Season 1 premiere, the show had earned the #2 trending spot on Netflix, right after the highly anticipated Ryan Murphy series Ratched, which premiered the same day. It may be a show aimed at kids, but clearly adult Netflix viewers were intrigued as well.

Also working in Camp Cretaceous' favor is its tie-in to the larger Jurassic World franchise. Since the third movie, Jurassic World: Dominion, was recently delayed from summer 2021 until June 2022, producing another season of the animated series will help tide fans over.

Dominion director and Camp Cretaceous executive producer Colin Trevorrow told Entertainment Weekly that some parts of Season 2 connect to Dominion. "It's important to me, out of respect for the writers who are continuing to expand and create, to recognize [Camp Cretaceous] as clearly its own story and its own show," Trevorrow said. "But this season — and if we're granted further opportunities to tell the story that we have [in Season 3] — will keep weaving in to the larger story and really inform some things ... that I'm really excited about."

Fans may have been disappointed to learn that Dominion's premiere date was pushed back, but another Camp Cretaceous season is the next best thing. And if the second season does as well as the first, a Season 3 renewal is likely around the corner.

This article was originally published on Jan. 23, 2021