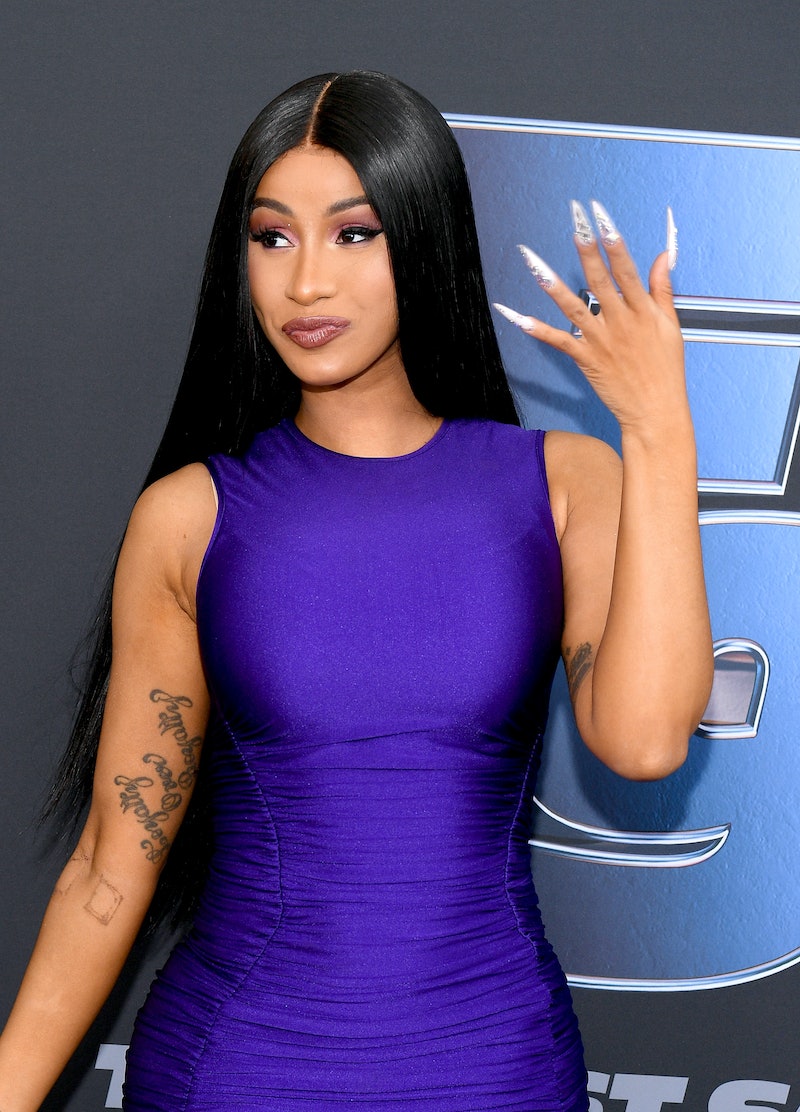 Cardi B may have just given fans everything they wanted with her controversial, anthemic new single "WAP," featuring Megan Thee Stallion, but she still has something special — if not unconventional— up her sleeve. Cardi B has joined OnlyFans, as she announced in an Instagram video on Tuesday, Aug. 11. But don't expect her to post the NSFW content usually found on the rising social media network.

The new subscription service, on which users charge followers a fee to access their content, has become very popular among adult film stars and is known for being a platform where models, dancers, and sex workers can create their own content. It's also seen a huge surge in subscribers during the coronavirus pandemic, which makes it the perfect place for Cardi to make a new social media home.

In her video announcing the new profile, Cardi made clear she'll use OnlyFans to post behind-the-scenes footage from her new video "WAP," including what happened when she tried to do a split on a chair without stretching beforehand (for an entire five months). But it won't just be BTS content, she also promised "real-life content," which includes addressing rumors about her that have been floating around. "You guys be mad nosy when it comes to my life," she said. "I’ma be addressing certain sh*t in there. Everything you wanna know, ask the question and it will be a topic on my OnlyFans." However, in her caption, the rapper made one thing clear: don't expect any NSFW content. "NO I WONT BE SHOWING P*SSY, T*TTIES, AND *SS," she said. "It will be a place for only me and my fans."

OnlyFans has gained a huge mainstream audience in the past year, even receiving a nod during Beyoncé's verse on Megan Thee Stallion's "Savage" remix. Cardi has become one of the first major celebrities to use the platform, and given how willing she is to share her life, dispel rumors, and defend fellow celebs like Kylie Jenner on her Twitter and Instagram, she seems like a natural fit for the site.

Fans can currently subscribe to Cardi's OnlyFans page for $4.99 a month. The subscription was originally priced at $10 a month, but she changed it because fans "spend too much on vinyls" and her upcoming merch. So far, she's only uploaded one video to her page, a behind-the-scenes clip from her Elle cover shoot, but fans should expect more content soon. promised to post more content soon.

More like this
The Beyhive Is Buzzing About Beyoncé’s 'Renaissance' Album
By Sam Ramsden
Beyoncé & Madonna’s “Break My Soul” Remix Honors A Group Of Black Icons
By Stephanie Topacio Long
Everything You Need To Know About ‘Black Panther: Wakanda Forever’
By Bustle Editors and Radhika Menon
Jennifer Coolidge Needs 'Legally Blonde 3' To Happen So She Stops Getting Hot Dog Jokes
By Jake Viswanath
Get Even More From Bustle — Sign Up For The Newsletter