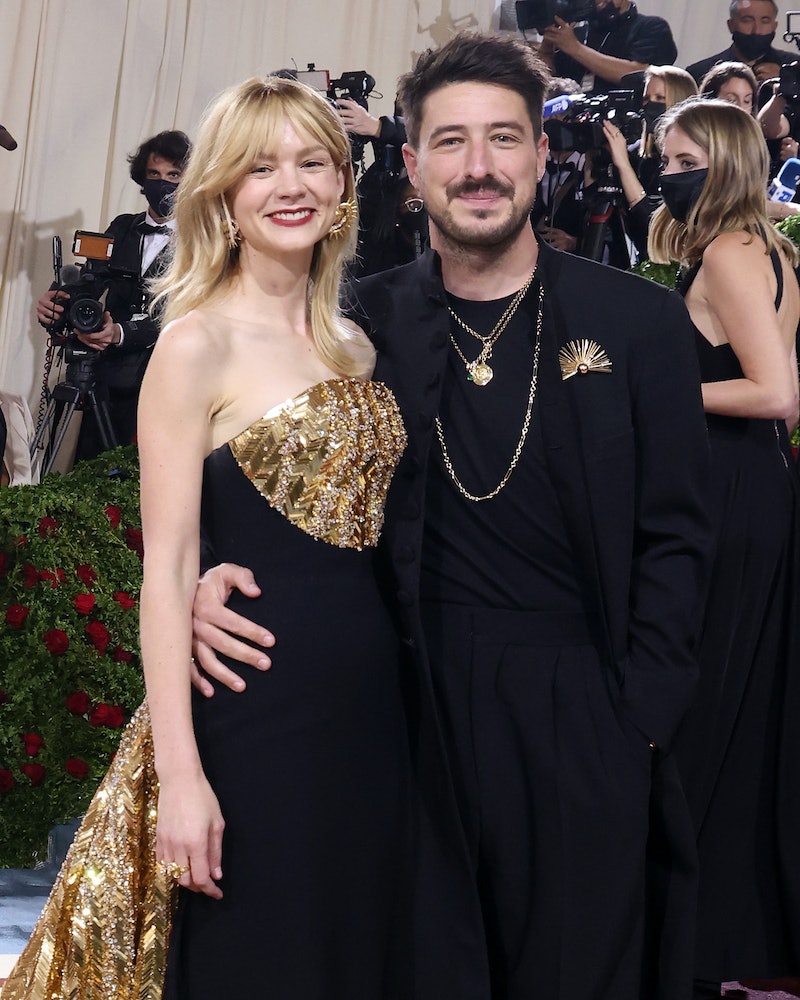 In just over a decade, Carey Mulligan and Marcus Mumford have gone from long-lost friends to marriage and parenthood. The two first met when they were twelve while spending a summer at Bible camp. “There’s a photo of us that first summer we met, I’ve got bleached blond hair,” Mumford told GQ. They remained pen pals for a while before losing touch. While Mulligan “doesn’t like to dwell on how” they met, she holds those letters close. “To have a love letter from someone, to hold it in your hand and know you can keep it for your whole life, that’s an amazing thing,” she once told The Telegraph.

While the early days of their romance were somewhat of a whirlwind, they kept most of it private. It wasn’t until April 2015 that Mulligan opened up for the first time about her relationship with Mumford and would feel more comfortable sharing that side of her life with the rest of the world — as has her significant other. Read on to discover their many milestones, including Met Galas, awards ceremonies, and parenthood.

Sometime in February, Mumford invited Mulligan to a secret show in Nashville, according to the Daily Mail. “She sat in the front row, and while he was singing, Marcus looked down at Carey, and she blushed,” a source said. “It was clear they had chemistry.”

A few days later, the pair were spotted at an Arcade Fire concert in New York City. “They were whispering to each other and enjoying the show,” a source told Us Weekly. “They definitely seemed like a couple.”

By March 2011, Mulligan had reportedly moved from New York City to the UK to live with Mumford, per E!.

Despite having not publicly confirmed their relationship, by August 2011 Mulligan and Mumford were engaged as Us Weekly reported at the time.

Mulligan and Mumford tied the knot with a spring wedding in April 2012 on a farm in Somerset. Officiated by Mumford’s dad (who is also a vicar), the guest list included Sienna Miller, Jake Gyllenhaal, and Colin Firth, according to Glamour.

As a co-chair of the Met Gala in May 2012, it was the perfect opportunity for Mulligan and Mumford to make their red carpet debut at the event. Themed around Prada: Impossible Conversations, Mulligan and Mumford were one of the first couples to arrive, with the actor wearing a gorgeous gold and silver Prada dress.

Mumford & Son’s second album Babel earned them a lot of praise, including Album of the Year at the 2013 Grammy awards. “We figured we weren’t going to win anything because the Black Keys have been swiping all day, and deservedly so,” Mumford said after accepting the award from Adele. Mulligan was immeasurably proud of her other half and could be seen in the audience wiping tears from her eyes.

In April 2015, Mulligan opened up about her relationship with Mumford and married life for the first time. “Like anyone, you try and split your time evenly,” she said, explaining how the key to her relationship with Mumford is balancing their busy schedules. And as for why she rarely talks about her private life, Mulligan said: “Marcus is the only thing that’s mine that I can keep totally away, so I try to.”

In the same interview, Tom Sturridge talked about what Mulligan and Mumford are like together. “It’s a very special thing. It’s not often talked about what a wonderful feeling it is to see someone that you care about love and be loved.” Sienna Miller had similar sentiments, explaining that “they both come from very solid families and have a real sense of the life they want to live.” She loves their “normalcy”, which she finds “sort of idyllic. Marcus can headline Glastonbury and Carey can be nominated for however many Oscars, and then they come back to their farm” in Devon. “It’s an amazing balance they’ve managed to strike,” Miller added.

September 2015: Their First Child Is Born

Mulligan and Mumford welcomed their first child to the world in September 2015, a girl called Evelyn.

Two years later, their son Wilfred was born. “As regards [to] my work, I don’t know if motherhood is always the first thought on my mind when I read a script, but I would suspect it’s altered my attitude,” Mulligan told Baby magazine. And as this was her second child, she felt much more prepared. “You’re a lot less paranoid, and I definitely felt I was ready for new challenges this time around.”

Mulligan and Mumford were invited to Prince Harry and Meghan Markle’s wedding in May 2018, which turned out to be a bit of a mare for the actor. Firstly, they ran a little late. “When you realise you’re later than Oprah, that sort of hurries you along,” Mulligan said on The Graham Norton Show, before adding that she got dehydrated because she wasn’t sure there would be a toilet. “There were all these rumours about what there would and wouldn’t be” at St. George’s Chapel, she explained.

On top of all that, Mumford was caught yawning on camera. “We were convinced that there were so many absurdly famous people that we weren’t going to be on camera,” Mulligan said during an appearance on Jimmy Kimmel Live.

In April 2021, Mulligan hosted Saturday Night Live for the first time. In her opening monologue, she mentioned how Mumford & Sons, or as she likes to call them, “My Husband & Sons,” had performed on the show three times. Mumford proceeded to gatecrash her SNL debut, resulting in a hilarious skit between the couple.

The couple arrived in style at the 2021 Academy Awards, where Mulligan was nominated for Best Actress for Promising Young Woman. According to ELLE, Mumford took an Oscar-themed lampshade as a souvenir. He also got a tattoo of an Oscar in honour of Mulligan’s nomination.

As Mumford would later explain to GQ in 2022, the tattoo resulted from a bet they made during lockdown. The bet was simple: If Mulligan wasn’t nominated, she’d have to get an Oscar tattoo. But if she was nominated, Mumford would have to get one instead. “And she did get nominated. And I got myself an Oscar, which I’m thrilled with,” he said.

A decade after their red carpet debut at the Met Gala, Mulligan and Mumford made their second appearance at the esteemed event in May 2022. Mulligan wore a Schiaparelli Haute Couture gown that took more than 4,000 hours to complete, according to Harper’s Bazaar.

On Aug. 10, 2022, Mumford shared deep and personal details of his private life with GQ in the run-up to his debut solo album. In it, he spoke of his relationship with Mulligan and how they’ve prioritised their marriage over everything. “Let’s make that our great work, and everything else can come from that, right?”

However, he admits that married life has been easy. “I don’t think it’s like, you reach a destination and then you celebrate.” Having been brought up in a religious household, Mumford is well aware of the pressures put on the concept of marriage. “In that culture, marriage is seen as the destination that you’re aiming for. If you can get there … you get to marriage and everything will be cool,” the musician said. “And that’s just not my experience. The reason I think people don’t stay married is because they don’t realise how much work it takes.”