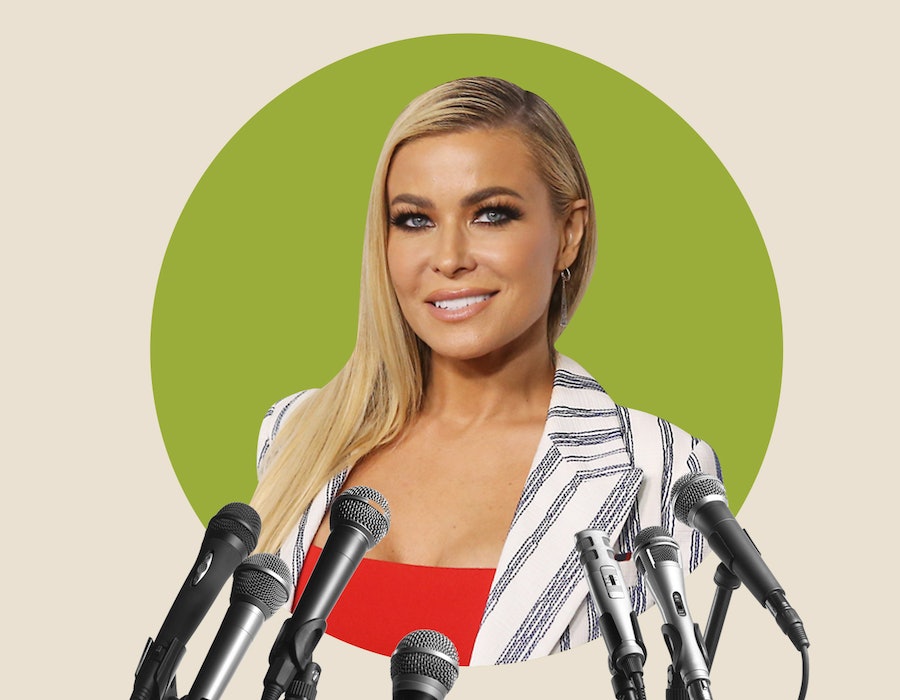 In Bustle’s Quick Question, we ask successful women all about advice — from the best guidance they’ve ever gotten to what they’re still figuring out. Here, Carmen Electra discusses conquering fear, embracing therapy, and shutting out critics (even ones named Donald Trump).

Carmen Electra’s origin story would make a riveting biopic. As a classically-trained triple threat fresh out of high school, she was discovered dancing in an LA club by a Prince associate — promptly becoming the superstar’s protégé, girlfriend, and opening act. But life wasn’t all diamonds and pearls. Before Baywatch, MTV, and those tabloid-catnip marriages, “I was completely broke and struggling,” Electra says. “I’ve gone through some pretty intense things.”

Though she’s never really stepped out of the spotlight, at 50, she’s learned to harness it. She’s finally getting her due, both in terms of recognition (Kim Kardashian and Vogue pay homage to her red carpet style) and compensation (within weeks of joining OnlyFans, she was among the top 0.1% of earners). Her epic life is ripe for a memoir — or a movie: “I would love for that to happen,” she says. “There’s so much people don’t know.” Below, Electra sounds off on survival, self-talk, and why worrying is a waste of time.

You grew up as a formally trained dancer?

In fourth grade, my mom enrolled me in the School for Creative and Performing Arts in Cincinnati, where I studied classical ballet, Martha Graham, jazz. I did vocal classes, musicals. That environment was really about pushing. It was almost like college, except at 9 years old, your teachers are already preparing you for either Broadway or Joffrey. I ended up heading out West.

You’ve said you’ve always been a big worrier. How do you conquer anxiety?

I just second-guess myself a lot. Fear comes and goes. I just always pushed through so I wouldn’t hold myself back. It helps when things are moving fast and busy. But even your own personal dialog makes a big difference. I remember when I was going onto The Tonight Show for the very first time, I was tearing myself up inside, saying, “Oh my God, I’m not pretty! I’m not funny. Am I going to be smart enough? Am I witty? Are they going to like me?” But the next time I did the show, I went in with positive thoughts and I did so much better. Worrying doesn’t help anything. My advice is to just stay in that moment and enjoy it. And if you’re going through a hard time, figure out what you need to do to get to a better place, whether it’s being around different people or seeing a therapist.

Do you believe in therapy?

Absolutely. Sometimes our friends don’t want to hear us complaining all the time. Friends are supposed to be there to listen, but it can get old. You might want to find someone to talk to that’s completely out of the circle. I know a lot of people who it’s helped. And I’ve definitely been in therapy a couple times.

You also love self-help books. If you were to write one, what would it be about?

It would be really intense. Because I’ve gone through some things people don’t know I’ve gone through. When I was first out here in LA, I was completely broke and struggling, hanging out with the wrong people, but I didn’t know it because I was so new. I mean, I had a gun held to my head. Eventually I met a manager and a publicist and they’d send me to auditions and events, and things started to pop off, like working for MTV. That was a big deal.

At the height of #MeToo, many famous women revealed harrowing stories. Will you ever share more about the hard times you went through?

When the time is right. Listen, my heart goes out to any woman that’s gone through a #MeToo type of situation. It’s really heartbreaking. I heard so many stories about the casting couch. I was really protected from those things earlier on when I was working with Prince. But then when I decided to take off and do this on my own, I was on my own.

During the supermarket tabloid era, you were often on Worst Dressed lists. Now Vogue is celebrating your style. Does it feel like vindication?

In that era, I was trying to figure it out. But I liked the outfits I was wearing! Everything was such a big deal in the ’90s. Any little flaw, any mistake was getting circled or pointed out. If you were to wear something edgy on the red carpet, it was like, Ugh! You had to be really clean and follow what you knew they were going to like. And I found myself getting lost and pulled away from the fashion that I love.

Cut to Kim Kardashian recreating one of your iconic looks. Are you friends?

We’ve worked together in the past. We’ve run into each other at events and we always talk. She’s always very sweet to me. She’s just really, really cool.

You also recently made a splash in The Last Dance. Are you still in touch with Dennis Rodman?

A person we both work with put us on the phone. We said hi, but it was pretty quick. He asked me to dinner. He’s funny.

Was motherhood ever of interest to you?

Yeah! Definitely. I guess I’m a little old-school, where I want a really good guy to do it with. So that’s what’s been holding me back. I’m dating and I’m having a blast. If it happens, or if we decide to make it happen a different way — there are so many ways you can do it — then we’ll see. Honestly, I always focused on work more than on being a mom. But that is the one thing I haven’t done in my life.

Your career is on fire at 50. Is Hollywood changing its approach to aging?

Hollywood is changing. We can look up to women like J.Lo and think, “Wow, she looks gorgeous. She just got married. She’s living her best life.” It’s inspiring. And I want to be inspiring too, hopefully. You should feel comfortable in your own skin and live the life you want to live. OnlyFans fits in perfectly because I am the creative director of my own shoots, on my own time. There’s nothing out there that I haven’t approved. And I love connecting with my fans. Sometimes they have requests. The fans love feet! It is so much fun. I don’t know why I didn’t do this a year ago.

And the business model is more financially beneficial?

I am my own boss. I own all the photos. I think more and more people are going to get involved in this. I think it’s the future.

Donald Trump once said something critical about your body. Is there anything you want to say back?

I’ve come to terms with the fact that if you’re going to put yourself out there, people are going to say things about you. A person in that position, yeah, it was a little strange, right? It was a little off-the-wall. So that was weird to me. But because I’ve been doing this for so long, I’m used to people judging, looking you over, criticizing. That just comes with the territory. Everyone has a right to their opinions. If you let those things bother you, it can stop your flow. So I pretty much ignore that stuff. And I stick with the positive.

More like this
Savannah Guthrie Got Her First-Ever Tattoo With This Former Wild Child
By Suzanne Zuckerman
Bonnie Milligan's Wellness Routine, From Daily Journaling To Drugstore Teas
By Jessica Derschowitz
Flip Phones Are Gen Z's Favorite New Nightlife Accessory
By Maria Santa Poggi
Learning To Love, Not Judge, The Lunchbox Wives Of TikTok
By Esther Zuckerman
Get Even More From Bustle — Sign Up For The Newsletter
From hair trends to relationship advice, our daily newsletter has everything you need to sound like a person who’s on TikTok, even if you aren’t.