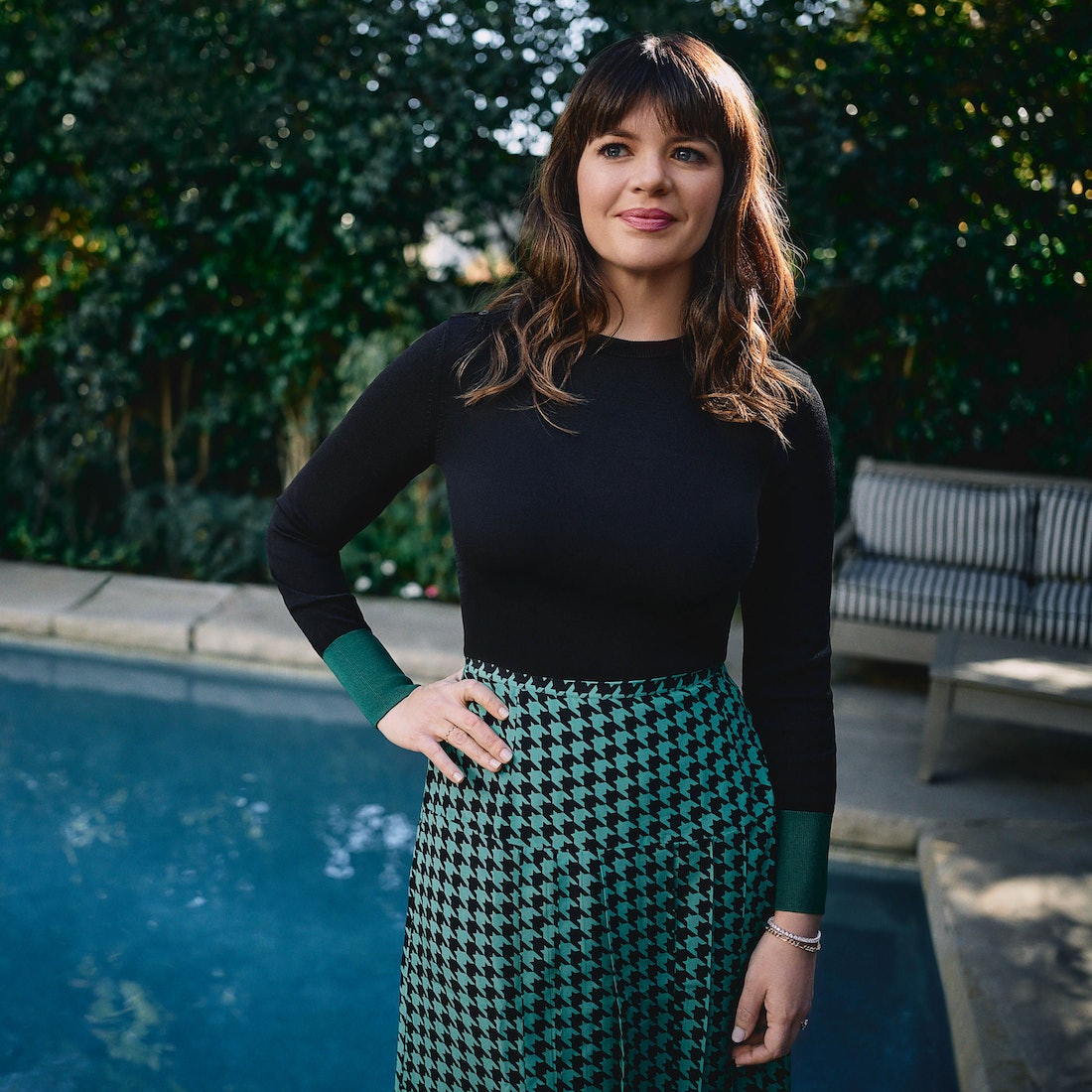 Casey Wilson isn’t in bed right now, but she wishes she was. "See how I'm hunched over right now holding my body up?" the actor, writer, and podcast host tells me over Zoom. She starts our call by apologizing if her face looks swollen from yesterday's eye peel, but Wilson looks like she’s glowing, not puffy. “I do feel as women there’s a standard to appear like everything’s organized, you’re so together, and you’re at the top of everything. And I certainly like to appear like that too," she says. “But I do know at my core who I am, and that’s someone who wants to be in a bed or a bath at all times.”

Wilson has never tried to downplay her lifelong devotion to comfort and excess — quite the opposite. From Happy Endings’ lovable train wreck Penny Hartz to Black Monday’s ostentatious heiress Tiff Georgina, Wilson has made a career out of playing women who love to indulge. “It’s always just easier for me to play myself,” she jokes. Much like the Real Housewives Wilson loves discussing on her podcast Bitch Sesh, Wilson delights in putting her unabashed outrageousness on full display for fans in her real life, too. From choosing to fly first class on a podcast tour while her co-host Danielle Schneider remained in coach to revealing she once attempted to procure a Plan B pill via Postmates, Wilson shares these anecdotes with a wink to fans, letting them know she’s fully aware of her own absurdity.

“I’ve always felt very comfortable indulging,” she says. “And especially now that I make my own money, I’m like, what is the harm in doing something a bit extra now and again?”

While Wilson’s “celebratory lifestyle” is on full display in her new memoir, The Wreckage of My Presence, so are her intimate struggles with self-compassion, anger, body image, and the unexpected death of her mother, Kathy, whom Wilson only learned suffered from Ritalin addiction several years after her passing. The wide-ranging collection of essays is a glimpse into Wilson’s life told with the actor’s signature candor, where no detail is too embarrassing to share if it might elicit a laugh and no memory too painful if it could provide cathartic comfort to others.

“My life has all been about trying to close the gap between the high highs and low lows,” Wilson says. “I think I’m definitely more comfortable in the gray, where some things are outrageously funny that are also devastatingly sad at the same time. The more we can intermingle and be comfortable [holding both those truths] the better.”

“I’ve always felt very comfortable indulging. And especially now that I make my own money, I’m like, what is the harm in doing something a bit extra now and again?”

Wilson, who turned 40 last fall, says that getting older and a deepened sense of life’s fragility over the past year helped give her the confidence to share these stories. The actor also points to her growing capability for self-compassion, something she credits to her life becoming more “spiritually guided” in recent years. “And I don’t mean like Jesus,” she clarifies. A self-described seeker, Wilson simply trusts that there's “something greater out there” showing her compassion. “Maybe that’s my version of self-care? But I can’t quite put it on myself, like I’m going to show myself self-care.”

That seeking has led her over the years to several mediums, astrologists, spiritual retreats, and even one ill-fated experience with mushrooms (“I did make a pact with whoever may be out there in the universe that if I did come back from that I would never do mushrooms again”). But lately, the actor has begun walking a different path toward that higher plane of being. “The biggest spiritual work I’ve been doing is just getting lasers done at the dermatologist,” Wilson says. The day prior she shared a glimpse of herself on Instagram leaving the house for her eye peel, already dressed in a hospital gown with numbing cream pre-slathered on her face. “I can get more enjoyment out of lasering my face than getting in touch with dead relatives.”

Wilson’s favored spiritual treatments may change over time, but there remains one constant source of support in her life: The Real Housewives. Wilson first discovered the franchise when its original installment, The Real Housewives of Orange County, premiered just after the death of her mother in 2005; the franchise became a lifeline for Wilson during this dark period. From that point on, the Housewives were more than just strangers on the screen, they became like friends. Or, as Wilson so aptly puts it, the “crazy family members we’re embarrassed of at Thanksgiving.”

“I just think if you don’t watch it, you don’t totally get what’s involved, which is that there’s [an] undercurrent of rage and darkness but it’s also really funny,” Wilson says, lighting up at the chance to discuss the Bravo franchise. While Wilson says she can’t help but laugh at even the smallest Housewives scenes, she also acknowledges it’s liberating to watch a group of older women move through the world completely unapologetic for their actions — even when those actions include allegedly helping a boyfriend fake cancer (Vicki Gunvalson) or accusing a co-star’s husband of cheating on her at the gym (Teresa Giudice). “When I’m driving, I’m worried that the car behind me doesn’t like me as a car,” Wilson says. “So to see these women, what they do… it’s just incredible.”

Though Wilson may love watching the Housewives shamelessly barrel through life without a concern for others, that doesn’t mean they’re immune to her discriminating eye. On Bitch Sesh, Wilson is as quick to share her biting opinions on the Housewives as she is to change her mind a few minutes later (“I have no allegiance to any opinion I have on anyone,” she quips). Wilson, in large part, feels comfortable sharing her unfiltered thoughts on the Housewives thanks to listeners’ respect of her and Schneider’s “no tagging” rule. “Because I don’t want to hurt them directly,” she explains. “I just want to talk about them behind their backs, as god intended.”

For her memoir, Wilson took the opposite tack, reaching out to nearly everyone mentioned in her book to get their sign-off on what’s written. “It was like doing Twelve Steps. I felt like I was making amends [with] everyone, because I just didn’t want anyone to feel surprised.”

Wilson is even sending a copy of her book with an accompanying letter to Susan Sarandon, whom she and her writing partner June Diane Raphael interned for after college. Though the duo never met Sarandon at the time, they did feel comfortable enough to use her office after hours to print and mail their own headshots to other potential jobs. Wilson even went so far as to develop a secret habit of replying to Sarandon’s fan mail under the actor’s name until she and Raphael were fired for reasons that should now be obvious.

While reflecting on her post-collegiate time in New York — which also included a job for a toxic filmmaker whose office number Wilson repurposed to double as the reservation line for she and Raphael’s comedy show — the actor seems equal parts in awe of and aghast at her own “bold” and “brazen” her behavior. She says she’s since learned to curb some of her more destructive tendencies, while growing to accept the sometimes extreme lengths she’ll go to make herself comfortable. And if she needs another eye peel to feel centered? She’ll head straight to the dermatologist.

“I’ve come to terms with that. It is who I am, for better or worse.”