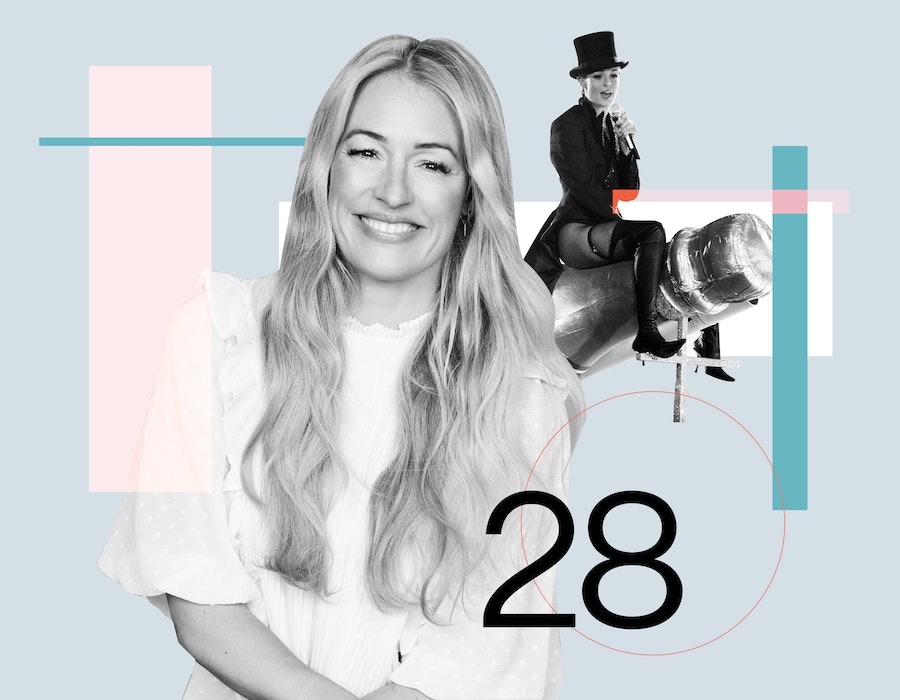 In Bustle’s Q&A series 28, successful women describe exactly what their lives looked like when they were 28 — what they wore, where they worked, what stressed them out most, and what, if anything, they would do differently. This time, TV presenter and Author Cat Deeley reflects on working with Ant & Dec, hosting the 2004 BRIT Awards, and becoming a published author.

It’s likely that if grew up in the UK in the late ‘90s/early '00s, Cat Deeley played a pretty fundamental part in your weekly viewing schedule. Between presenting SM:TV Live alongside Ant and Dec, hosting Stars In Their Eyes, and that major BRIT Awards moment, Deeley was nothing short of a bona fide British TV staple. Then she made the monumental move to Hollywood, where she became the face of So You Think You Can Dance for an impressive 17 seasons. (For which she’s received five Emmy nominations, and made an estimated £15 million fortune, reportsYou magazine.)

She and her husband, fellow Fame Academy presenter Patrick Kielty, married in 2012 and lived in Los Angeles for well over a decade. "It’s funny because I never moved to 'break America'," Deeley tells me. "I wanted the adventure and to discover a new place. I wanted to live in a new house and take on new things."

With the arrival of Milo, now four, and James, two, Deeley added 'mum' to her list of roles. Now, with the publication of her first children's book, The Joy In You, she's adding author, too. “Writing a book is something I always wanted to do but you’ve got to wait until the timings are right. I know I couldn’t have written this book without having Milo and James,” she says. Describing it as "a love letter to her boys", the picture book illustrated by Rosie Butcher includes a number of touching details personal to Deeley and her children; cute koalas and the rocket they zoom around on included. "My boys love rockets," she explains. "Milo could count backwards from ten before he could count forwards."

Speaking from her North London home, it is easy to forget that Deeley is a presenting powerhouse: she's as lovely and warm IRL as she is on-screen. Below she looks back at 2004, the lack of responsibilities she had at the time and the fun she had.

Take us back to when you were 28. What how did you feel about your life and career?

Is 28 meant to be a really good year for everyone? Because it was a really good one for me. I was hosting CD:UK at the time, and I’d done Stars In Their Eyes and Fame Academy. It’s funny because I’m not sure if I felt successful, but I was definitely having a brilliant time.

I went for lunch the other day with Ant and Dec and we were talking about that time and being 28. We’d all just bought our first houses, we were working on a show we loved, and we didn’t have any real responsibilities. We’d finish filming on a Saturday and every single person who worked on SM:TV Live would go off to a bar and hang out for the rest of the afternoon. We knew just enough to get by, but we were naive enough, too.

It’s funny because I’m not sure if I felt successful, but I was definitely having a brilliant time.

28 was also massive for me because it was the year that I hosted the BRIT Awards; still one of the biggest moments of my life to this day! To me, the BRITs were the most amazing event and spectacle out there. I remember being thrilled when they asked me to host, but I actually turned them down because they wanted to get guest hosts to join throughout the night. Coming from a background of live TV, I knew that if I fell over or dropped the mic I could be silly, make a joke, and move on. If you’ve never worked with someone, it can be really hard to create that chemistry. Two weeks later they came back and asked if I’d like to do it alone.

I said yes, but I had another idea. The Darkness were topping charts and rock'n'roll was back, so I wanted to fly in on a bottle of Jack Daniels. The room went deathly quiet when I suggested it. For a few reasons it wasn’t possible, but director Hamish Hamilton (who has directed the Super Bowl halftime show) built me a gigantic bottle of champagne and I came up from under the stage, with fire and searchlights in the background, to the tune of Primal Scream’s “Get Your Rocks Off”. I think I did an air punch, too. I vividly remember walking under the stage as Black Eyed Peas were performing, wearing my top hat and heels, and being absolutely terrified. Still one of the biggest things I’ve ever done!

Coming off the back of the BRIT Awards, SM: TV Live, and Stars In Their Eyes, did you feel comfortable in who you were at 28?

I think I was, but I probably didn’t have as much confidence as I do now; that comes with experience. At 28, I had no responsibilities, so I could afford to be totally selfish and slightly ridiculous at times. Every so often I would get a precautionary phone call from my mum or dad, checking on what I was doing and telling me to behave myself. But that’s the way it’s supposed to be.

I’m so lucky to have been surrounded then – and now – by really great friends and an awesome family. I always felt supported enough to be who I wanted to be, comfortable in the knowledge that they’d tell me the truth, whether it was good or bad.

Who did you look up to growing up, or who inspired you?

When I was a kid there weren't really any presenters as such that I looked to, but I did really want to be Julie Andrews. It was a bitter pill to swallow when I realised Julie Andrews had Julie Andrews covered. But I was always drawn to performers, presenters, and comedians who just looked like they had a great time doing what they were doing and who didn't take themselves too seriously.

Did you ever see yourself getting away from presenting and writing a book?

Writing a book has always been an ambition of mine. But it was like when you say you’re going to go and live in another country, learn a language, or play an instrument... It was something I’d like to do but always put on the back-burner.

After I had my boys I started to think about it more, but like any mum, by the end of the day I’m totally frazzled; I just want to put on my pyjamas and go to bed. Sometimes you can’t even string a sentence together. So I decided to write something that would encapsulate everything I wanted to say to my kids, and that would leave them feeling full of love.

Kids are scared of the unknown so when you don’t talk to them about things it’s worse. I’m not saying you should talk about world politics before bedtime, but if you approach topics lightly and tell them the truth, they can handle anything. I wanted them to know that they’re enough, no matter what they’re feeling.

It’s the actual going for it that’s the scary part, because you learn what you’re capable of in the process. So much of what you do is learning from your mistakes and failures, as well as learning from what worked out. You can always turn things to a positive and find a silver lining, I think. I’d just say keep going.

The Joy in You is published by Random House Books for Young Readers, an imprint of Random House Children’s Books, a division of Penguin Random House LLC, New York. Available online and in bookshops from Sept. 15, 2020, £12.99.