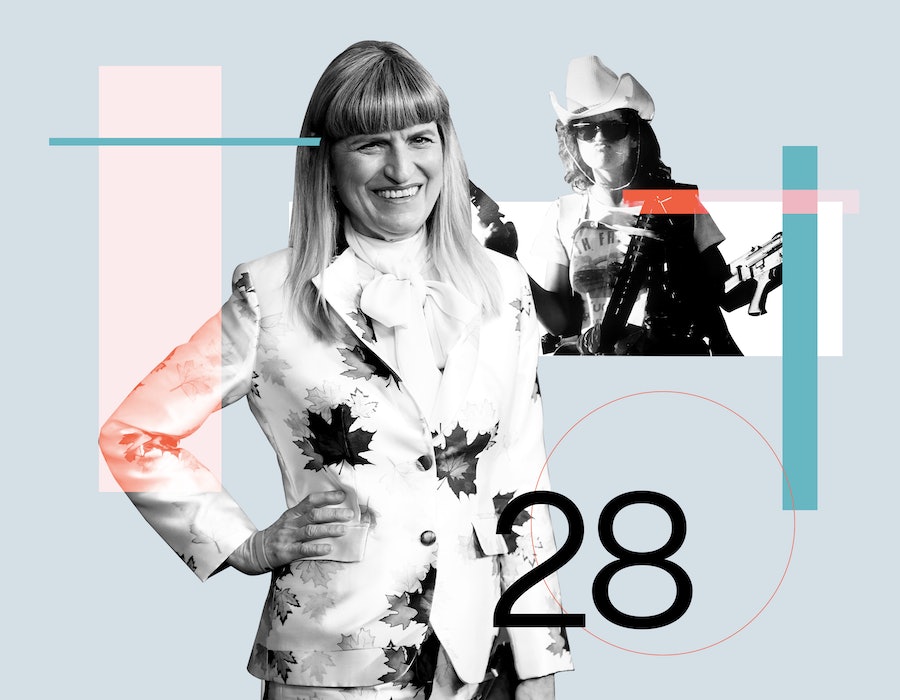 In Bustle’s Q&A series 28, successful women describe exactly what their lives looked like when they were 28 — what they wore, where they worked, what stressed them out most, and what, if anything, they would do differently. This time, director Catherine Hardwicke reflects on the year she spent in "the middle of the desert, riding motorcycles, handing out Uzis to people."

Catherine Hardwicke wants to pitch you a movie. In quarantine, the Twilight director has been forcing herself to write "every minute of the day and night." She's currently working on a script about a post-pandemic world in which "everybody wears a mask." It's science fiction. She hasn't pitched it yet, and who knows when film production will be able to resume. But for now, she's enjoying exploring this new world. Breaking new ground is, after all, what made Hardwicke a household name.

Hardwicke first made a splash in 2003 with her directorial debut Thirteen, which won her the Sundance Film Festival Directing Award, kickstarted Nikki Reed's career, and earned critical praise for its raw portrayal of a 13-year-old girl — a subject that at the time, Hollywood rarely explored seriously. Five years later, Hardwicke made history with Twilight, which earned $400 million worldwide and became the highest grossing film by a female director. Since then, she's dabbled in sci-fi (2011's Red Riding Hood) and heartbreaking drama (2015's Miss You Already). She even directed a few episodes of This Is Us.

The 64-year-old's next project is part sci-fi and part coming-of-age story. Her new Quibi show Don't Look Deeper follows a teenager named Aisha (Helena Howard) who lives in a futuristic world where robots are being integrated into society. Oddly, it was the 10-minute episodic format that drew her to the project. "I found that fascinating and liberating in a wild way," Hardwicke says. The time limit forced her to be efficient in her storytelling and make every second count.

Don't Look Deeper fits right in to Hardwicke's repertoire, which, despite spanning genres and styles, has always centered on the stories of young women. She notes that Don't Look Deeper and Thirteen both focus on women asking themselves fundamental questions about who they are and who they want to be. Looking back at her life, they're questions Hardwicke thinks we continue to ask ourselves well into adulthood. "If you're 18 or you're 28, [you're asking yourself], 'Where do I want to go from here? Who am I? What's my identity?'"

Below, Hardwicke reflects on film school, making puppets for Tim Burton, and why she never had a role model.

Tell me what your life was like at age 28.

I had just moved out to LA a year or so before that, and I didn't know too much about the film business. I went to UCLA grad school for animation, but I needed jobs. So I would basically take any crazy job in the film business I could get. Some of them were wonderful, like I sculpted puppets for Tim Burton in a little workshop, just me and one other guy. That was awesome. And then I worked for Roger Corman where they had me doing everything. I did stunts, I did weapons — I didn't know anything about weapons. I was out in the middle of the desert, riding motorcycles, handing out Uzis to people. And doing art department [work]. So I've really started out on the most crazy, low-budget movies.

When you were 28, what was your career goal as a filmmaker?

When I went to UCLA, everybody there [was] a director. So they just said, write, direct, produce, make your own short films. If you wrote a script, you could make it, no teacher had to say yes. You could just do it. And you also had to finance it out of your own pocket and make the sandwiches for the crew and everything, too. So that was a fascinating experience. I loved doing that, but then I needed money. So, the production side was a great job for me because I got paid. And then I got a front row seat working with these great directors and watching how they worked.

It did take me longer than I thought it would to direct my first movie. Now there's a different climate. I think it's more possible for a young woman to be able to direct [her] first movie because people have really shined a spotlight on the disparity. But for me, you know, I had to struggle.

What kind of films did you envision yourself making at 28?

In film school, I made personal films. One of my films was [about] how hard it is for a woman to wake up and figure out what they're going to wear, and their image, their body image, their style — who am I? What am I? So I made a film about that. I went around interviewing a ton of guys at UCLA, [asking] what their comments are about women and women's bodies and women's appearances. And then I used that as a soundtrack, just rolling through the actress' head as she tried to figure out what to wear, and just how to get out of the house in the morning. And my animated projects were really way out there... creating new worlds and going to outer space.

Why do you think you felt that conviction to tell stories about young women?

You're compelled to tell stories about things that you feel and you know. And that's what's beautiful about this whole movement that we're having [for more] inclusivity, diversity. We're getting windows into so many people's souls that we never did before.

What do you think your 28-year-old self would think of Thirteen and Twilight?

I think for sure Thirteen would have fit right in with the short film I was mentioning, where you're going deep into a person's brain, trying to figure out [body] image, style, and consciousness. And I think Twilight would have been in the realm of my animated film, which was creating a magical world.

You've become a filmmaker who young women and aspiring directors look up to. Did you have anybody like that when you were 28?

I hadn't really identified a female filmmaker to model myself after. Of course, there were less women filmmakers at the time, there was less of a spotlight on that. When I made Thirteen, I remember I didn't watch teen comedies. I felt the style was going to be more related to [Martin] Scorsese's Mean Streets. You're going to be immersed in this world of war photography, where these girls were so volatile and their emotions were changing minute to minute, so the camera was almost racing to keep up with it.

Learn everything you can in every job that you're in and make the most out of every job. Don't complain, 'Oh, I'm too good for this job' or whatever. Just kick ass and do it great. And then you will impress other people. You will keep moving up. You will have the inspiration or the confidence to do your own job and create your own jobs. And every experience that you're in, you can learn a lot from it.